In a recent post I wrote that the Jews in Mesopotamia who were responsible for the Babylonian Talmud would quite likely have had very little contact with the Christianity Westerners are familiar with. An interesting book that gives us a glimpse into the sorts of Christianities these rabbis probably knew is The Lost History of Christianity: The Thousand Year Golden Age of the Church in the Middle East, Africa, and Asia — and How It Died, by Philip Jenkins. But be warned. If you pick it up for snippets of references to that question you risk being drawn into a far more engrossing narrative than you anticipated about the shining lights of civilization in the east at the time all we Westerners know from our schooling is a Dark Age.

On the question of the Christianity that was known to the Jews behind the Babylonian Talmud, what I learned from this book is

The Jews who may have been responsible for those Yeshu and “Nazarene” references in the Babylonian Talmud almost certainly relied upon these Eastern/Syrian Christians who were outcasts from the West for their information about Christianity. (Jenkins does not discuss the relationship of these Christians to the Babylonian Talmud — I am only putting my two plus two together after reading the first few chapters of Jenkins’ book.)

Some excerpts of relevance to this question and that I found interesting follow. All the highlighting in the passages is my own. I have linked to names and terms that may not be so familiar to many of us. 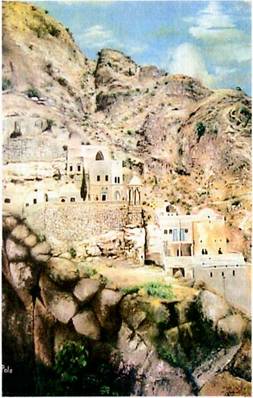 From Timothy’s point of view, the culture and learning of the ancient world had never been lost; nor, critically, had the connection with the primitive church. We easily contrast the Latin, feudal world of the Middle Ages with the ancient church rooted in the Semitic languages of the Middle East, but in Timothy’s time, the Church of the East still thought and spoke in Syriac, and its adherents continued to do so for several centuries afterward. As late as the thirteenth century, they still called themselves Nasraye, “Nazarenes,” a form that preserves the Aramaic term used by the apostles; and they knew Jesus as Yeshua. Monks and priests bore the title rabban, teacher or master, which is of course related to the familiar rabbi. Church thinkers used literary approaches that have much to do with the Talmud as with the theologies of Latin Europe. If we ever to tempted to speculate on what the early church might have looked like if it had developed independently, avoiding the mixed blessing of its alliance with Roman state power, we have but to look east. (p. 7)

Nestorian writers preserve readings of noncanonical Psalms that also appear in the Qumran scrolls. Syrian writers also knew a host of lesser and later Jewish postbiblical texts, and Old Testament apocryphal writings, the pseudepigrapha. Like its ancient predecessors, Timothy’s church remained thoroughly in dialogue with Semitic and Jewish traditions. . . . Semitic Christianity dies out not in the fourth century, but in the fourteenth. (p. 8)

Compare with scholarship in recent decades seeking to uncover pre-Constantinian Christianity in the West:

For scholars like Elaine Pagels, Bart Ehrman, and Karen King, these mystical and speculative ideas flourished — together with their distinctive lost Gospels — until they were largely suppressed during the fourth century, following the Council of Nicea. Yet Eastern Christians also continued to pursue mystical quests in ways that were familiar in the early church, and they did so long after the fourth century. In contrast to the rigid homogeneity that is so often associated with the Western Middle Ages, Eastern prelates had to confront real diversity of thought, with daring mystical and theological speculations. (pp. 8-9)

Origen is seen as an aberration in the West. If Christianity first blossomed as “a riotous diversity”, it appears that the place to find that same diversity for several centuries was in the East:

Origenism long continued to agitate the Nestorian church. Some mystics taught that, as true salvation was spiritual, bodily resurrection was irrelevant, and there would be neither judgment nor punishment. Visionaries sought contemplative ecstasy in which verbal prayer would no longer be relevant, and some rejected sacraments and offices, in their quest for the pristine simplicity of a restored Garden of Eden. Above all, such mystics taught silence and solitude, together with strict asceticism, using language highly reminiscent of the ancient Gnostics. These theories were still circulating widely enough to force Timothy to confront them in the 780s. . . . The Syriac churches represent the ultimate lost Christianity. (p. 9)

Adaptability and other religious influences:

In modern terminology, the Eastern churches were thoroughly enculturated, presenting their faith in the languages of the cultures they encountered, sharing their artistic and literary forms. Operating as it did on a global scale, Timothy’s church had no choice but to engage in dialogue with several other world religions — with Islam and Judaism, of course, but also with Zoroastrianism, Buddhism, and Taoism. In central Asia, the Christians’ main rivals were the Buddhists, who were then engaged in their own great missionary era. For many Mongol and Turkish peoples, Buddhism and Christianity were familiar parts of the cultural landscape, and existed comfortably alongside older primal and shamanic traditions. (p. 14)

Jenkins narrates the story of a Buddhist monk who needed help translating Sanskrit sutras into a Chinese language. He established a relationship with a Nestorian bishop who did the work for him.

The world’s first Christian kingdom was Osrhoene, beyond the eastern borders of the Roman Empire, with its capital at Edessa: its king accepted Christianity around 200. That regime did not last long, but neighboring Armenia made this the official religion around the year 300 and retains the faith until the present day. (p. 54)

Already by the third century, Persia had a substantial Christian presence, concentrated in the south of the country, along the Gulf. Once Rome became Christian, the link with that foreign government made life difficult for Christians living under the rule of the rival superpower of the time. (From the third century through the seventh, Persia was ruled by the powerful Sassanian dynasty.) The Persians responded by executing hundreds of bishops and clergy in a persecution at least as murderous as anything ever inflicted by pagan Rome: in the fourth century, the Persians killed sixteen thousand Christian believers in forty-year period. (p. 57)

Yet operating beyond the reach of Roman power had advantages for religious groups who now found themselves condemned or persecuted by imperial authorities — for Jews, and also for those Christian sects that the established Catholic/Orthodox deemed heretical. . . . [E]ver more Christian believers were forced to flee beyond the frontier, especially into those weakly controlled borderlands that became such fertile territory for religious innovation and interaction. The number and importance of such religious dissidents grew steadily with the fifth-century splits over the relationship between Christ’s human and divine natures. . . .

Within the Persian Empire, the main Christian church was based in the twin cities of Seleucia-Ctesiphon, the imperial capital that was the successor to ancient Babylon, and the most populous city in the world at that time. (p. 57)

The centrality of monasticism and mysticism:

All these churches, moreover, saw monasticism as the highest form of Christian life. Monasticism probably originated in third-century Egypt . . . . (p. 72)

Within the monasteries and hermitages, these spiritual athletes pursued intense mystical practices that surprise us because, according to some scholars, they should have ceased centuries before. (p. 74)

We are familiar with the histories by Elaine Pagels that declare that mysticism and the blurring of the boundaries between the human and divine belonged to an age that disappeared in the fourth century. But Jenkins reminds us that this is not correct. Such ideas that were condemned as heretical in the West still flourished in the East.

Laments about the loss of the Gospel of Thomas and the Gnostic worldview read strangely when we look at the near-obsessive nature of the Eastern Christian mystical quest over the following millennium. In fact, the Eastern churches had lost virtually nothing of the ancient mysticism that so attracts many modern readers to the world of the Gnostics. Ideas of solitude, inner contemplation, and even the quest for divinity pervade the stories and teachings of the Egyptian hermits, stories that were passed down over the centuries and are easily available in the work know as the Philokalia . . . . The widely used hymns of Ephraem the Syrian included one proclaiming, “Glory to the Silence that spake by His [Christ’s] voice.” . (p. 74)

Mainstream Eastern churches taught daring ideas about the potential of approaching God so closely as actually to become divine. (p. 75)

“Strange” readings of the Bible:

[E]arly and medieval Eastern Christians read the Bible in ways that now seem strange, especially in the thorough integration of the worlds of the Old and New Testaments, so that every aspect of the life of Christ was foreshadowed somewhere in the Law or Prophets. The Bible was a seamless whole in which all prefigures Christ. (p. 90)

It’s not a bad idea, I suspect, to keep this larger perspective of early Christian history in mind and make necessary adjustments to our perspective when approaching the biblical texts. 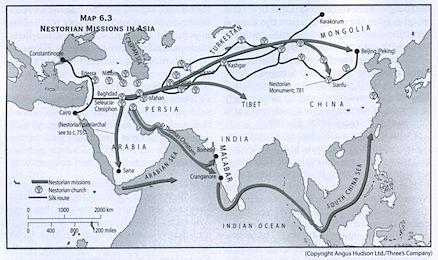 7 thoughts on “The Lost Half of Christianity”