I smoke because Picasso smoked. And because Hitler didn’t.— Albert Finney

Robert Wright, a senior editor at The Atlantic, in his recent piece called “Creationists vs. Evolutionists: An American Story,” explains why the U.S. has seen a recent uptick in the number of people who believe in Young-Earth Creationism (YEC). Is it because of the endless hammering by the holy hucksters on TV? Is it because of the 24-hour, nonstop Right-wing noise machine? Is it because of politicians who pander to ignorance and supernatural mumbo-jumbo?  Of course not. It’s because of those mean old “new atheists.”

Jerry Coyne’s response over at Why Evolution Is True effectively debunks Wright’s distressingly poor thesis, especially the part where we were supposed to have been in the middle of a truce between science and superstition until extremely rude people like Richard Dawkins forced people to choose. I can add very little to Coyne’s remarks.

What intrigues me is this idea that people would choose to support or not support a given scientific theory based on the people associated with it. Over at the HuffPo, Michael Zimmerman, the founder of the Clergy Project, asks: “Who’s Responsible for the Evolution/Creation Controversy?” You know the kind of article it’s going to be from the start when he adds, “It’s Not As Simple as Some Would Have You Believe.” Ah yes, the old “plenty-of-blame-to-go-around” piece, as predictable as earwigs after a hard rain. But catch what he says about men (and women, we suppose) of the cloth and their role in the debate:

END_OF_DOCUMENT_TOKEN_TO_BE_REPLACED

Mythicist Inventions: Part One – Creating the Mythical Christ from the Pagan Mystery Cults

“Did the Earliest Christians Invent Jesus as a Dying-Rising God, Based on Pagan Myths?”

Having asked that question, Ehrman presents the situation this way:

ONE OF THE MOST widely asserted claims found in the mythicist literature is that Jesus was an invention of the early Christians who had been deeply influenced by the prevalent notion of a dying-rising god, as found throughout the pagan religions of antiquity. The theory behind this claim is that people in many ancient religions worshipped gods who died and rose again: Osiris, Attis, Adonis, Tammuz, Heracles, Melqart, Eshmun, Baal, and so on. Originally, the theory goes, these gods were connected with vegetation and were worshipped in fertility cults. Just as every year the crops die in winter but then come back to life in the spring, so too with the gods who are associated with the crops. They die (when the crops do) and go to the underworld, but then they revive (with the crops) and reappear on earth, raised from the dead. They are worshipped then as dying-rising deities. (DJE?, p. 221)

According to Ehrman, the view of almost all mythicists is that Jesus is an artificial Jewish version of a dying and rising deity of the above type; the significant parallels between the mysteries and the Jesus story prove this claim.

But this is something of a straw man. It envisions that some founder of the movement, or some Jewish study group (a scriptural book review club perhaps?), consciously sat down and ‘invented’ a new version of an old religion by emulating the latter’s features. Occasionally this sort of thing may happen (Ptolemy I deliberately syncretizing two gods into one to create a national-unity religion, or Joseph Smith inventing the whole gold plates business). But more often than not it is ‘in the air’ concepts and expressions that throw up a new set of ideas and interpretations within a break-away group or a particular cultural or sectarian entity.

Common inventions of the human mind
.

There is much in early Christianity which owes its presence to the Jewish culture . . . But there is also no question that fundamental aspects of the early Christian faith do not have a Jewish character but a Hellenistic one. 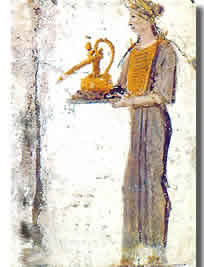 Almost every sect that looks back to a divine event or interaction with a deity develops a sacred meal as a commemorative thanksgiving or ritual reflection. (What is more fitting, or available, to give to a god than food and drink, or more traditionally associated with a god’s own nature and bounty?)

If the most fundamental religious impulse is to find a way to believe in a life after death, this is almost inevitably going to take the form of creating a deity who will bestow such a thing; and given our mystical predilections it should not be surprising that a process many would tend to come up with is the principle of the god undergoing the desired goal himself. It would indeed take a god to conquer death, but if we could just find a way to ride through that formidable barrier on his divine coattails. . . .

This is one mythicist who does not overplay the ‘deliberate borrowing’ principle to explain the origins of Christianity. END_OF_DOCUMENT_TOKEN_TO_BE_REPLACED