Did the earliest Christians regard Jesus as God?

But what precisely is meant by the phrase ‘Jesus was God’? Much of the problem lies in Ehrman’s semantic woolliness.

Bart Ehrman now embarks on what is probably the thorniest problem in New Testament research. How was Jesus regarded, not only by his followers, but by the earliest Christians who spread the faith? Ehrman declares:

the earliest Christians did not consider Jesus God. . . . scholars are unified in thinking that the view that Jesus was God was a later development within Christian circles. (DJE? p. 231)

But what precisely is meant by the phrase ‘Jesus was God’? Much of the problem lies in Ehrman’s semantic woolliness. Later Church Councils declared Jesus fully a co-equal with God the Father, of the same substance, two ‘persons’ within the Trinity. I am aware of no scholarship, let alone any mythicist, who suggests that this was the view of any segment of earliest Christianity.

But to say that Jesus was an “emanation” of God is something else. The difference between Paul’s Son of God and Philo’s Logos as an emanation of God is largely a matter of personhood. Philo does not personalize his Logos; he calls it God’s “first-born,” but it is not a distinct ‘person’; rather, it is a kind of radiant force which has certain effects on the world. Paul’s Son has been carried one step further (though a large one), in that he is a full hypostasis, a distinct divine personage with an awareness of self and roles of his own—and capable of being worshiped on his own.

But an “emanation” is not God per se. That is why Philo can describe him as “begotten” of God. He can be styled a part of the Godhead, but he is a subordinate part. (I have no desire to sound like a theologian, but to try to explain as I see it the concepts that lie in the minds of Christian writers, past and present. They are attempting to describe what they see as a spiritual reality; I regard it as bearing no relation to any reality at all.) Paul in 1 Corinthians 15:28 speaks of the Son’s fate once God’s enemies are vanquished, a passage which exercises theologians because it looks incompatible with the Trinity. For here Paul says that the Son “will be subjected” to God, in the apparent sense of being ‘subsumed’ back into God, who will then become One again—“so that God will be all in all.” There will only be one ‘person.’

Thus the “Son” which we find described throughout the epistles is viewed in the sense of an emanation of God, not God himself. 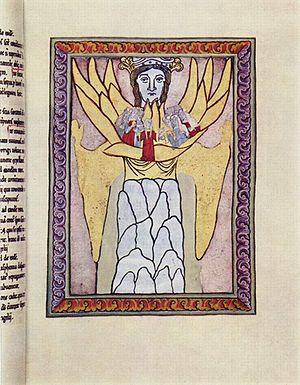 There can be little question that the idea of the Son, Paul’s “Christ” and spiritual Messiah, arose from the philosophical thinking of the era, which created for the highest Deity intermediary spiritual forces and subordinate divine entities to fill certain roles and to be revelatory channels between God and humanity. In Judaism, this was the role of personified Wisdom, though her divinity was relatively innocuous and her ‘person’ perhaps as much poetic as real. (She may have been a later scribal compromise when an earlier goddess consort of Yahweh was abandoned). In Greek thinking, the intermediary force was the Logos, though in varied versions (the Platonic Logos and Stoic Logos were quite different), and with an independence and personification less developed than Paul’s.

Thus the “Son” which we find described throughout the epistles is viewed in the sense of an emanation of God, not God himself. He has a personification of his own, and he fills certain roles.