It might surprise some people to know that, even several years after Darwin and Wallace made public their independent discoveries and insights regarding natural selection, the vast majority of Lamarckians were not persuaded. Similarly, some die-hard Steady-State proponents never embraced the Big Bang. Fred Hoyle was promoting variations of his Steady State theory, publishing papers as late as 1993. Even in the “hard” sciences it often takes a new generation to come of age before the paradigm can shift.

More often than you might expect, progress requires this combination — the old guard dying off and new scholars coming of age, cutting their teeth on promising new research — for new ideas to take hold. And take note, I’m not talking about ideas that form the basis of our self-identity, our place in the universe, or our salvation. It’s simply human nature to hold on to ideas that have worked well for us, especially if we’ve held them for decades. Consider, then, how difficult it would be to change your mind if it meant the difference between eternal bliss and rotting in a hole in the dirt until you’re dust.

The limited utility of scholarly consensus

Scholarly consensus in any field has somewhat limited usefulness. It tells us what most people think within a given field at a given time, but does it really give us an insight on fundamental, universal truths? Probably not, but it at least gives us a starting point.

A little over seven years ago Mark Goodacre at his NT Blog asked, “What is consensus?” Tied up in that question, of course, are related questions pertaining to how we determine consensus, what is its value, whom do we ask, and so on. By all means, if you haven’t read it, you should, and while you’re at it, you should check out his follow-up post, “Less of a consensus on consensus.” It’s unfortunate that some of the links Dr. Goodacre refers to are no longer available. At the bottom of this post, I’ll provide a list of alternate links made possible by the Internet Wayback Machine.

END_OF_DOCUMENT_TOKEN_TO_BE_REPLACED 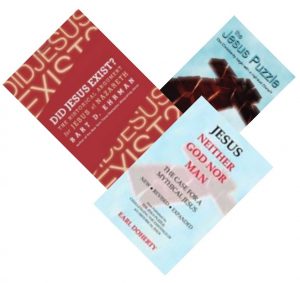 Was Jesus Crucified in the Spiritual Realm Rather Than on Earth?

The practice of drawing on previous scholarship

Ehrman calls me “one of the staunchest defenders of a mythicist view of Christ.” Well, that’s almost the only valid statement he makes about me in the entire book. He starts off with a complaint which has often cropped up in criticisms directed against me:

He quotes professional scholars at length when their views prove useful for developing aspects of his argument, but he fails to point out that not a single one of these scholars agrees with his overarching thesis. (DJE? p. 252)

First of all, I scarcely think I needed to point this out. What mainstream New Testament scholar subscribes to the mythicist theory, let alone that Paul regarded Christ as sacrificed in the heavenly realm? If any of these scholars I draw on had so believed, does Ehrman think I would not have trumpeted it to the skies? I was hardly concealing what anyone would assume was the historicist orientation of such scholars.

Ehrman’s motive in raising that fallacy is quite clearly to impugn to me some form of dishonest procedure.

More importantly, does Ehrman or anyone else regard it as illegitimate of me to draw on observations and conclusions on the part of established scholarship if they can be fitted into the context of my own argument? Mainstream scholars do that all the time. All of scholarship builds on the work of predecessors, and all of those predecessors are subject to reinterpretation and the reapplication of their work to the new conclusions of their successors. Besides, many of my references to the views of historicist scholars involve a clear indication that I make use of their observations in different ways than they do, with different end results.

Enough said on that fallacy. Ehrman’s motive in raising it is quite clearly to impugn to me some form of dishonest procedure.

Multiple views of the universe
.

This is not simply a misreading, it presents the exact opposite of what I actually say.

One of the “problems” Ehrman finds in my book is its main thesis:

One particular piece is especially unconvincing: in Doherty’s view, Paul (and other early Christians) believed that the Son of God had undergone a redeeming “‘blood’ sacrifice” not in this world but in a spiritual realm above it. (DJE? p. 252)

In the course of explaining why he is unconvinced, Ehrman makes a number of egregious misreadings of my text. (I know it is 800 pages, but it is still incumbent upon Ehrman to actually see the words as they stand on the page if he is going to find fault with them.) He says: END_OF_DOCUMENT_TOKEN_TO_BE_REPLACED