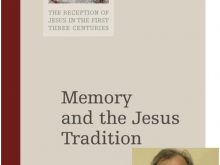 In a recent post, Neil cited a paper by Dr. Alan Kirk called “Memory Theory and Jesus Research.” While Kirk does an adequate job of explaining the current state of play in memory theory, I couldn’t help but notice yet again some misunderstandings in the ways Memory Mavens remember German critical scholarship in general and form criticism in particular. I’ve been putting off this dismally inevitable task, but the time has come to offer some corrections and commentary.

First, Kirk takes a swipe at William Wrede. He writes:

. . . Wrede’s bifurcation of Markan tradition into surviving elements of empirical history on the one hand and Easter-engendered dogma on the other, with the latter occluding the former, was precursor to the form critics’ model. Of a “historical view of the real life of Jesus,” wrote Wrede, only “pale residues” survive. (Kirk 2011, p. 809-810, emphasis mine)

While memory traces of this sort lay at the origins of the tradition, they were a residuum, largely inert with respect to developments in the tradition itself. The salient image was of so-called authentic memories of Jesus coming to be buried under multiple layers of “tradition.” Tradition, in other words, had little to do with memory. (Kirk 2011, p. 809)

How does Kirk’s analysis square with what Wrede actually said? Kirk’s wording may lead the casual reader to infer from the first citation above that Wrede was referring to the general state of Mark’s sources or, to put in another way, the overall character of the various streams of oral and written tradition available to the author of Mark.

But that would be wrong. END_OF_DOCUMENT_TOKEN_TO_BE_REPLACED

I seem to be asking for a lot of help, lately. This time, it’s for those with access to the Greek text of Polybius’s book 12 of his History and with the means of locating without much trouble the word συμπλοκή

The occasion is the following passage about ancient historians:

The existence of different voices or interpretations of a past which have the “right” to exist side-by-side shows that the accurate reporting of past events was not necessarily on the agenda of societies and their authors in Antiquity. Leaving to readers the decision of what really happened tells us much about the nature of the societies we are dealing with (Polybius, who expresses a rationalistic approach to the past, knew how to tackle this by suggesting that history should be viewed as a symploke, [intertwining]; see his Book 12).

Mendels, Doron. 2008. “How Was Antiquity Treated in Societies with a Hellenistic Heritage? (And Why Did the Rabbis Avoid Writing History?).” In Antiquity in Antiquity: Jewish and Christian Pasts in the Greco-Roman World, edited by Gregg Gardner and Kevin Osterloh, 132–51. Tübingen: Mohr Siebeck. (p. 142)

I read Book 12 in an English translation and failed to notice any discussion of the sort of idea I think Doron Mendels is addressing. What would help if I knew what passage(s) in Book 12 Polybius uses συμπλοκή or some form of it.

Anyone able to help with this one?