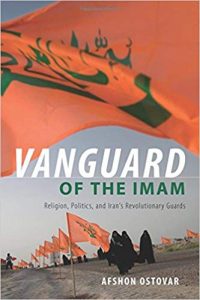 Here’s something of interest that I read a while ago and marked for future reference. Serious challenges facing the Revolutionary Guard in Iran include “the problem of peace”.

The threat posed by the United States has been the backdrop for much of the IRGC’s career. The organization has relied on the United States to serve as an omnipresent boogeyman bent on destroying the revolution. If the Islamic Republic were to reach a rapprochement with the United States, America would no longer be a viable scapegoat for the repression of Iranians. Within that context, Iranians will expect more out of life and more freedoms from the regime. An argument could be made that a rapprochement with the United States would have an ameliorating effect on Iran’s behavior both internally and externally. Some sectors of the regime, such as the reformists, would probably favor such change.

The IRGC and the hardline camp likely would not. This is because the IRGC’s status in the country is contingent on the existence of existential threats to the Islamic system. If the United States is no longer a problem, the IRGC will need to find a suitable replacement. Threats will need to be found outside Iran and within. The IRGC already sees the social and cultural arenas as a battleground between it and anti-Islamic forces. The need for a threat could see the IRGC place more emphasis on these issues — and other scapegoats such as religious minorities — than it already does. This means further repression of the Iranian people at a time when they will be expecting more liberty, not less.

That was before Trump and Bolton. I think “omnipresent boogeyman” is perhaps too fanciful a term in the current situation.