Through a Haaretz article by Amir Tibon I learned of a new Pew Research Center Poll: U.S. Public Has Favorable View of Israel’s People, but Is Less Positive Toward Its Government 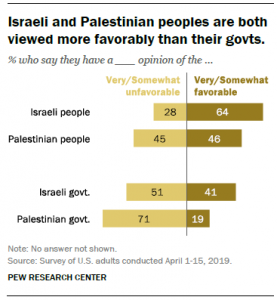 One might hope that the title alone of the results of that survey will go some way towards demolishing the slur that criticism of Israel’s governments’ respective policies is a subtle form of anti-semitism.

Disappointingly predictable was the finding that Christians (notably the evangalical side of Christianity) are more likely than Jews and the “religiously unaffiliated” to approve of Trump’s hardline stance in support of Israel’s policies (presumably towards Palestinians).

As I’ve experienced in other areas, more Catholics than fundamentalists are on the side of liberalism, social justice and support for oppressed populations, and the support for Trump’s position towards Israel is less among Catholics than among fundamentalists and evangelicals. Bring on Armageddon, I can hear the latter half-silently hoping. “God will bless those who bless the descendants of Abraham!”

Interesting that American blacks even today appear to continue to identify in some sense with the Palestinians. (That notion of identification on the part of American blacks has been a controversial question in the past.)

Jews are not quite as totally gung-ho:

Sometimes a book is delivered in the post to me in packaging that is, well, curiuous.

I recently received a huge cardboard carton that felt very light and wondered what on earth it could be. I opened it to find at the bottom a very, very thin book that a publisher had sent to me for reviewing. (A task I have still to do.) Why? presumably it was oversize by height and/or width for normal packing so the next extreme step was the only alternative. 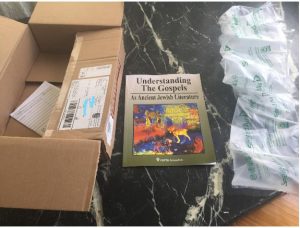 But yesterday was something else. This was one of those bags that you imagine is used for a sack of potatoes but it was marked “Swiss Post”. It was tied up in the middle with one of those plastic twist ties and delivery label and down at the bottom of the bag was the book you see beside it in the photo. 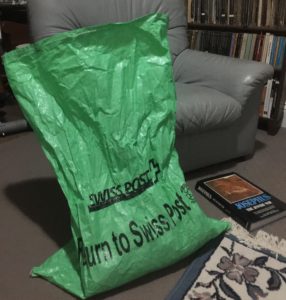 It’s a heavy book. Perhaps that had something to do with it. But strange. Very strange indeed.