From the previous discussion it can be established that denialism does not mean disagreement with the majority or even with the “everyone else” in the field or for having stand-alone “politically incorrect” beliefs: it is possible to disagree with “everyone” yet not be a denialist. How so? Richard Evans explained it by comparison of David Irving with another prominent historian I have also discussed from time to time, Eric Hobsbawm.

Further to the right of O’Brien, the columnist ‘Peter Simple,’ writing in the Daily Telegraph, considered it a “strange sort of country” which could consign Irving to “outer darkness while conferring the Order of Merit on another historian, the Marxist Eric Hobsbawm, an only partly and unwillingly repentant apologist for the Soviet Union, a system of tyranny whose victims far outnumbered those of Nazi Germany.” Leaving aside the numbers of victims, and ignoring the fact that Hobsbawm was not awarded the Order of Merit, which is in the personal gift of the queen, but was appointed a Companion of Honour, which is a government recommendation, the point here was, once more, that Irving did not lose his lawsuit because of his opinions, but because he was found to have deliberately falsified the evidence, something Hobsbawm, who in his day has attracted the most bitter controversy, has never been accused of doing, even by his most savage critics. (Evans , 238f) 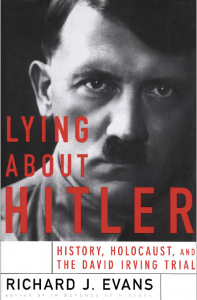 What is a denialist?

I have heard the term used to describe Holocaust deniers, creationists (the young-earth kind), climate change sceptics, anti-vaxxers, and probably some others that don’t come to mind right now. (Oh yes, now I remember. Some people apply the term to those who are not convinced that Jesus was a historical figure.)

Do all of those groups share something in common that earns them the label “denialist”? What is it that each of those ideas has that sets them apart from intellectual positions that cannot be seen as “denialist”?

With this question in mind I had a closer look at Holocaust denial. I had accidentally come across a movie about the David Irving and Deborah Lipstadt trial and that led me to reading as a follow-up . . .

I liked Richard Evans’ book on history as a discipline and the challenges it was facing with certain postmodernist inroads, In Defence of History (1997), so I was especially interested in his reflections on his experience as the specialist historian witness in the Irving trial. (I’ve addressed aspects of Evans’ In Defence of History several times on this blog.)

Some years back I was curious to understand what Irving’s arguments were about the Holocaust so I purchased second hand copies of Hitler’s War and The War Path and was bemused. I couldn’t see what people were complaining about. I failed to realize that all the fuss was about his second edition (1991) of those books. I had read the 1977 and 1978 works.

David Irving can be considered the “father” of Holocaust denial. So what is it about his work that makes it so? I select passages from Richard Evans’ conclusions about Irving as a historian. I highlight sections I find of special interest. END_OF_DOCUMENT_TOKEN_TO_BE_REPLACED