All posts in this series:

Part 5 of Greg Doudna‘s the interview with John Curington.

The previous installment ended with Curington’s recalling a visit by Adlai Stevenson amidst a rowdy demonstration and H.L. Hunts interest in retrieving an autographed book.

GD: The Adlai Stevenson incident happened less than a month before the Kennedy assassination.

You have to accept this fact: Johnson had worn his welcome out with the Kennedys on the ‘60’s ticket there. He was gonna be—he was not gonna be on the ticket in ’64. Bobby Kennedy was going to indict a fellow named Bobby Baker. And that deal was already made. Bobby Baker would in turn turn against Lyndon Johnson, enter into a plea agreement on his deal, just like they’re doing on the deal with Trump. Johnson was going to be out in ’64. No ifs, ands, buts, and maybes.

And nobody realized this until about the beginning of ’63, latter part of ’62 or ’63. Johnson was losing his skills every day, and Jack Kennedy was gaining more. So Mr. Hunt was almost at the stage where he didn’t have much time to fulfill his obligation that Kennedy would not live through four—would not survive four years in the office there. That’s really the essence of the Kennedy story. For Mr. Hunt to protect his empire, and to honor his commitment to Lyndon Johnson, Kennedy had to leave office. No ifs, ands, buts about it.

GD: How could Hunt make that happen?

JC: Having somebody shoot him with a high-powered rifle. Pretty easy.

GD: How would Hunt go about doing that?

JC: I don’t think Hunt would have gotten on the telephone and called somebody up. I think he would have had enough power with Sam Giancana or Joe Civello, or Luciano, just to make a suggestion that he needed a little help, and I think they would run it there.

GD: So Hunt may not know how they did it—

JC: No, he wouldn’t care how they did it.

GD: After the assassination, did Mr. Hunt show any signs or unusual knowledge or say anything?

JC: No. And that wouldn’t be unusual at all.

GD: And you say that Hunt—nobody was above Hunt?

JC: No. No. I don’t—Hunt would give orders to Johnson, J. Edgar Hoover—

GD: He would? He would give orders to these guys?

JC: All of them. And back at this time in Kuwait—back at this time there were no public telephones. There was no way to communicate for your personnel, to communicate back to the head offices, from Kuwait to New York or Los Angeles or anywhere, Chicago, anywhere in the world. Every major oil company was over there, and every major oil company had accountants, they had attorneys, they had every kind of personnel in the world because they were changing their bid every day.

H. L. Hunt’s over there, again, showing his thinking mechanism against other people there. There were only two or three telegraph companies in the city that they were in there in Kuwait. Every major oil company went every day to send a telegram to their parent company as to what somebody else was thinking, what to bid—they’re changing bids, every hour there. Mr. Hunt goes down, finds the head man of the telegraph companies, to make a deal with him. That man furnished him copies of every communication that went out from the major oil companies. So Mr. Hunt is sitting there, looking at everybody’s hold cards and playing deals.

What did the man get out of it? Mr. Hunt was able to call Lyndon Johnson, and say I want this man and his family to have a visa or citizenship or whatever it was. A 15 or 20-second communication from H. L. Hunt to Lyndon Johnson got that man and his family citizenship in the United States. Bunker and H. L. Hunt—eventually they lost it, Kuwait took it away from them—but Bunker, they sold a half interest in it to British Petroleum, and H. L.—Bunker’s income was in excess of three million dollars cash a day for several years there.

So if you don’t think the President, or the Vice President of the United States, can do you a business favor, then, you know, you need to evaluate your economics a little bit further there.

Here’s a man—I would imagine there were fifteen major oil companies making bids on that. Mr. Hunt had a real inexpensive hotel room, looking at everything. He had every communication that went out from every major company to their headquarters there.

GD: Amazing. Going back to Hoover and Hunt—did they regard each other as equals?

JC: Oh I wouldn’t think so. No, I would think Hoover would think he had no comparison in the world. I don’t think either one of them would consider themselves equal to the other. I think they each would have thought they were far further along, you know, in their abilities and talents and their skills. That’d be my personal thought there.

GD: It’s sort of stunning that Hunt and J. Edgar Hoover were in such close communication long term and giving information for the Life Line program.

So it finally dawned on Mr. Hunt that he was helping Martin Luther King, building his reputation with those derogatory stories, rather than getting people united to work against him.

GD: How did he come to that realization?

JC: Common sense. If you were putting on a program every year, and Martin Luther King has a meeting, and 75,000 people show up, applauding him and clapping him and getting all the publicity, and he has the same meeting in the same town a year later, and 140,000 people show up, would that suggest to you that Life Line is being effective, or would that suggest to you that maybe something else should be done?

Well that’s the way you evaluate a program like that. An orangutang can do the same assessment—you know, it doesn’t take anybody with calculators and computers. If there’s more people showing up that you don’t want to show up, then what you’re doing is not working.

GD: Hoover—he’s the chief law enforcement officer in the United States. So a lot of people would wonder, how could he go along with removing people? I’m asking this as a naive question, but—Hoover was willing to have dark things done?

JC: Well, in a way he was just like Mr. Hunt. He thought his thoughts were unequal to anybody else’s thoughts. And everything he did, in his own mind he thought he was benefitting the American people. So he thought he ought to be patted on the back and say, good job J. Edgar, rather than somebody trying to crucify him, you know. And Mr. Hunt in his own mind believed that everything that Life Line said was for the benefit of mankind. You couldn’t convince him otherwise.

I know you’ve never read (H. L. Hunt’s) Alpaca. It’s a boring book to read. But what it boils down to—Mr. Hunt had a theory that people with wealth should have a bigger voting right than people without anything.

And in my own mind I believe there were more personal feelings of Hoover and H. L. Hunt on Martin Luther King than anybody else.

I’ve put out quite a bit of information that says absolutely nothing when you get down to the nitty-gritty of it you know. I mean, I don’t know what prompted Jack Ruby to shoot Lee Harvey Oswald. I don’t know if Joe Civello had anything to do with it or not. But there’s a lot of unusual circumstances that went into effect what was done, that I don’t have an answer for. 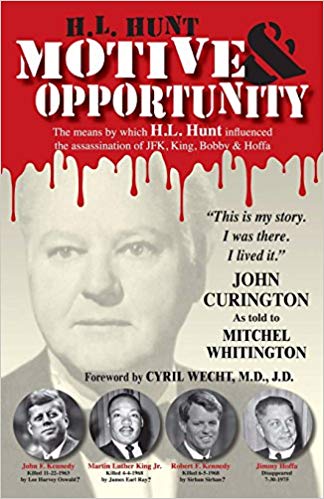 JC: But back when we were gonna set up our kill squad (this is explained in Mr. Curington’s book, Motive and Opportunity, see end of this interview), what we were gonna set up is that there were going to be three or four or five people doing what Mr. Hunt wanted to do and they would be operating independently of each other.

Again, I’m not saying this happened or didn’t happen, but somewhere down the road when it dawned on Mr. Hunt that Kennedy simply had to be removed from office—no ifs, ands, or buts—he could have called Civello in, and said, “Man, I’m in a bad spot. If there is any kind of idea you can come up with that would get rid of Kennedy, I’ll do you some favors down the road.”

Well, Civello wouldn’t know why or anything else, but he could very well know somebody and say, “If you’ve got a good expert marksman, I’ve got a parade route, can you send somebody out—”—I’m just talking out loud now—

JC: —I don’t have any basis whatsoever. But those things can be unraveled with three or four or five people. When we were going to get our kill squad in operation, theoretically these three or four or five people would operate independently, with no knowledge or contacts or tie-ins whatsoever with the other four or five. What happened in these deals is just exactly the plan that Civello instructed. When you go home you need to pull up on your computer the CIA and their workmanship with Sam Giancana on killing Fidel Castro. What they were working on is just exactly the same plan as I’m outlining with Civello and Mr. Hunt.

GD: Was Civello doing something with the Dallas police department?

JC: Oh, he would have had contacts there, that would have told him everything that was going on. I could depend on Lieutenant George Butler and Will Fritz—anything of importance I could depend on them to furnish me that information. That goes on every day. Civello would have had contacts there. If there was gonna be a raid somewhere, I think he’d know about it. If there’s somewhere gettin’ out of hand I think he would know about it. That’s going on in every county in the morning. So that’s nothing new. People doing something illegal—they’ll all have some contacts there in the police department.

GD: How about Billie Sol Estes?

JC: Billie Sol Estes came into our office two or three or four different times, and he was a Life Line listener. And I may or may not have mentioned this, but Billie Sol made a statement to me one time. We were visiting, we <unintelligible> Mr. Hunt, and he says, “John, let me tell you something in business that you’ll always remember.” I said, well what is it. That’s when he was under a hundred different indictments you know. He said, “You can shear a sheep two or three times, but you can only skin ’em once.” I thought that was a pretty wise saying.

GD: That was his philosophy of business?

JC: Yo. Of course he ripped off everybody from Wall Street on down. But he was pretty selective. He was smart enough to know that you can only skin ’em one time, but you can milk ’em two or three times.

GD: There’s one question I’ve got to ask because other people will ask. Many of these important events, you were at the heart of it. It’s a long time now, and people might say, why didn’t you say something earlier? I mean, when the Warren Commission and the House Committee were investigating—

5 thoughts on “Billionaire Logic and the Death of JFK / 5 —”