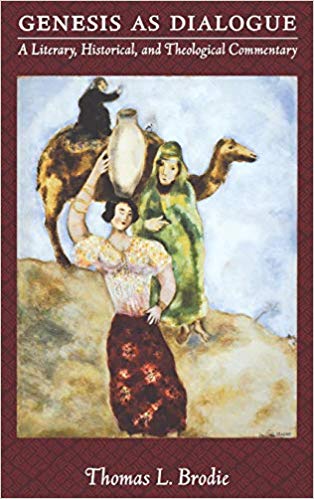 Were the first books of the “Old Testament” composed by “redactors” piecing together stories from different sources (that has long been the predominant view) or is it possible that they were composed by a single author or “school of authors”? The former is the documentary hypothesis. For a background on the documentary hypothesis refer to the post Who wrote the Bible? Rise of the Documentary Hypothesis. The topic has resurfaced with some recent posts (Plato and the Bible; Genesis to Kings, Authorship) that question the validity of the DH, proposing a “unitary authorship” of the Pentateuch and more. I am intrigued by the new alternative but have not yet sold my soul to it. I am not always overly enthusiastic about some of the arguments for a single authorship. So consider these posts as exploratory and informative. (But that’s what most of my posts are here, anyway.

Here I cite but one scholar’s criticism of the DH and proposal for the Flood Story in Genesis being composed from scratch as a single narrative. That is, the narrative is not a patched quilt of priestly and Yahwist sources after all. Here is Thomas Brodie’s take on the story (quoted words are in dark azure; the rest is my summary and comment.)

The deluge account contains much repetition and variation, and so some researchers have suggested that it is composed from two sources — J and P . . . .

Some of the examples of the repetition and variation:

Brodie’s faults the documentary hypothesis as being based on contradictory arguments:

The final product is not an unimaginative collection of material drawn from distinct sources, but an artful unified composition arranged chiastically around the central affirmation in 8:1 that “God remembered Noah.”

This explanation, however, contains radical problems, problems that are both general and specific.

1. The purported J story is seriously incomplete. It contains no account of making the ark or leaving it. Such lack of completeness is not explained by a desire to avoid repetition. The author had no problem with repetition as such; some minor details occur twice.

2. The so-called “double” entry to the ark (7:7–9, 13–16) does not require two sources. The doubled text is part of a single coherent repetitive style — similar to the repetitiveness of Genesis 17 (17:23–27). Essentially the same is true of other so-called doublets: they are part of a coherent repetitive style. Repetition is a basic feature of narrative, especially of biblical narrative (Alter, 1981, 88–113). Repetition results from various techniques (Niccacci, 1994). The issue then is not whether there is repetition but whether it is possible to discern the repetition’s variation or purpose. The two commands about entering the ark (6:18–20; 7:1–3), for instance, have several variations of context and content, but they are sufficiently similar to build something important: the sense — amid a collapsing world — of momentum and continuity. Nor do the two diverse types of bird (the raven and the dove, 8:6–12) mean two sources. In Tablet XI of the Epic of Gilgamesh, the Noah-like Utnapishtim sends out three diverse birds—a dove, a swallow, and a raven (Brichto, 1998, 114) — but that does not mean three sources.

3. The language of some purported J material, especially as regards order and sacrifice, would normally be reckoned as late or priestly.

For these and other reasons, scholars such as Blenkinsopp (1992, 77–78) and Ska (1996, 259) have moved to the idea of a single (priestly) account, which was later retouched. In other words, rather than dividing the text fairly evenly in two, they attribute most of it to a single author and reserve just a small percentage to an editor.

So some scholars are finding the different pieces fit better as if the story was composed as a single unit from the start. Brodie lists other indicators of what he believes is a unitary narrative: END_OF_DOCUMENT_TOKEN_TO_BE_REPLACED

This assertion is entirely fiction. There is no evidence for any of these claims, as far as I am aware, and I have read reasonably widely on literature in the time of the Flavian emperors. The history Josephus wrote was not an “official” history somehow “approved by” the authorities, either. It is quite unlikely that the Flavian emperor’s ever read or heard a reading of Josephus’s work. They had other propaganda and administrative issues to take up their time.

Other extravagant claims in the video are that the Roman authorities seized the holy books of the Jews from the temple, somehow implying that such an action was targeted at reducing the Jewish belief in a messianic leader to come and free them from the Romans. That, we saw, was also a misleading claim since the Jews held many other copies of the Scriptures and they probably never even read the actual copy deposited in the Temple to begin with. It was there as a sacred relic. Besides, belief in an imminent messiah, even if it existed (and we linked to evidence there was no such disturbing movement at that time) would not be quelled by removing texts from a mostly illiterate population. Josephus and other sources that inform us about the Jewish War and Roman military concerns inform us of other reasons for the Jewish was that had nothing to do with a so-called “messianic movement”. The video’s claims or inferences that the Flavian emperors (Vespasian and Titus) were confronted by widespread and regular Jewish uprisings are simply not true.

13. At one point we hear on the video: “All of the Roman Flavian historians record that Vespasian and family was the Christ.”

I don’t know the basis for that claim but I know of not a single ancient historian that said the Vespasian family were “the Christ”. Josephus said there was a prophecy that a world ruler would come from Judea and that’s all there is. Josephus did not tell us the actual source for that claim, but it was a timely one to make to ensure his survival and to assist Vespasian in establishing his status as a rightful emperor. He used the propaganda to declare that he was a fulfillment of an ancient prophecy from the east, but the notion of a Jewish “christ” or “messiah” was alien and meaningless to him.

14. The video presentation points out that the Roman emperors and their bureaucracy were dedicated to enforcing the Roman imperial cult, so that the emperor was to be worshiped as a god. END_OF_DOCUMENT_TOKEN_TO_BE_REPLACED