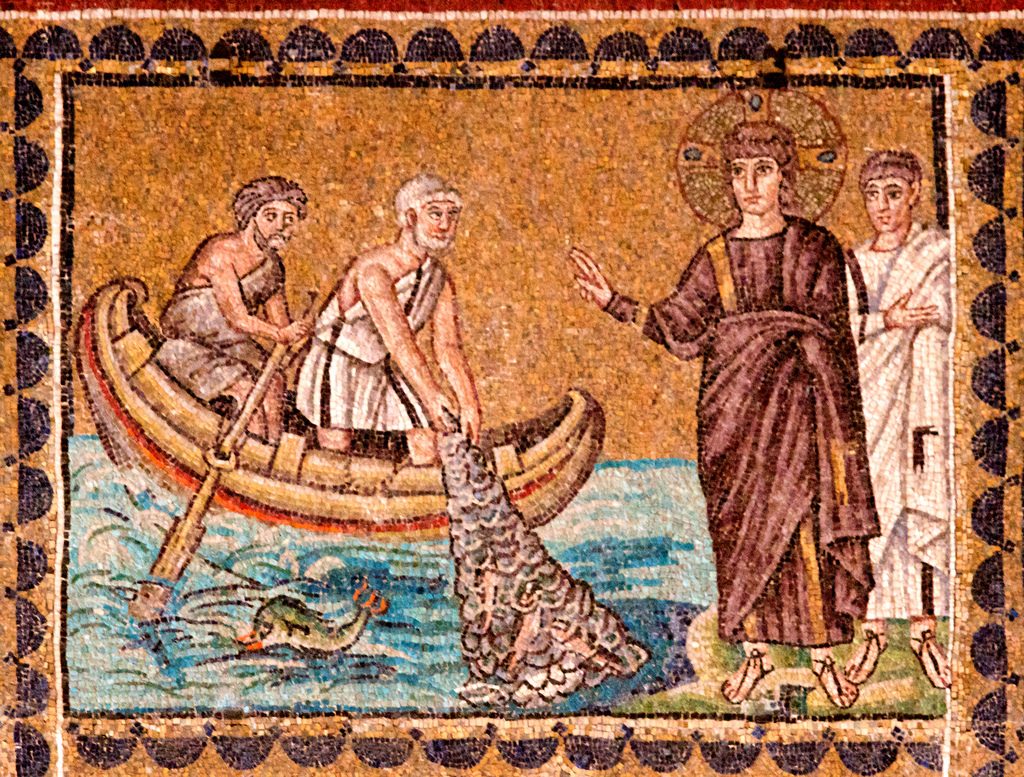 Since we have been talking about “fishing for men” and how it can be interpreted in different ways . . .

There may not be any need to choose among these different interpretations; the disciples’ fishing for people is probably a multivalent image that includes their future missionary preaching, their future teaching, and their future exorcisms (cf. 3:14-15; 6:7,12-13, 30; 13:9-10), all of which are understood as a participation in God’s eschatological war against demonic forces; this war, moreover, recapitulates God’s redemption of Israel from Egyptian bondage.

(Wassell 637, my formatting; my bolding in all quotations)

There was once a time when I thought the idea of “fishing for men” was not a particularly irenic image, certainly not for the fish or for comparing people to fish being pulled, gasping, out of the water to die a slow death. I recall trying to rationalize the metaphor. We are “alive in our sins in the world” today and have to “die” or “mortify the flesh” in order to live a new life in a new kingdom. But that didn’t really work because the image offers no pleasant lease of life for the fish.

There was once a time when I felt that the original metaphor as found in Jeremiah 16:16 was more judgmental than pastoral. Sure, if one reads the verse in the context of the previous two or three it does sound quite positive, presenting Jeremiah’s readers with a scene of drawing lost Israelites back from captivity to a restored happy kingdom:

14 Therefore, behold, the days come, saith the Lord, that it shall no more be said, The Lord liveth, that brought up the children of Israel out of the land of Egypt;

15 But, The Lord liveth, that brought up the children of Israel from the land of the north, and from all the lands whither he had driven them: and I will bring them again into their land that I gave unto their fathers.

16 Behold, I will send for many fishers, saith the Lord, and they shall fish them;

But when I studied the Book of Jeremiah more attentively I had to discard that shallow interpretation. In its fuller context the image is one of judgement.

10 And it shall come to pass, when thou shalt shew this people all these words, and they shall say unto thee, Wherefore hath the Lord pronounced all this great evil against us? or what is our iniquity? or what is our sin that we have committed against the Lord our God?

12 And ye have done worse than your fathers; for, behold, ye walk every one after the imagination of his evil heart, that they may not hearken unto me:

13 Therefore will I cast you out of this land into a land that ye know not, neither ye nor your fathers; and there shall ye serve other gods day and night; where I will not shew you favour.

14 Therefore, behold, the days come, saith the Lord, that it shall no more be said, The Lord liveth, that brought up the children of Israel out of the land of Egypt;

15 But, The Lord liveth, that brought up the children of Israel from the land of the north, and from all the lands whither he had driven them: and I will bring them again into their land that I gave unto their fathers.

17 For mine eyes are upon all their ways: they are not hid from my face, neither is their iniquity hid from mine eyes.

The image of fishing is associated now with the image of pulling people out of their land and exiling them to “a land they know not”. It is no longer an image of salvation but an image of judgment.

Contrast the Gospels of Luke and John

But in certain of the gospels it clearly is an image of salvation. END_OF_DOCUMENT_TOKEN_TO_BE_REPLACED