The first part of my response to Tim O’Neill’s Jesus the Apocalyptic Prophet is @ Examining the Evidence for Jesus as an Apocalyptic Prophet. There we pointed out that there is no support in our historical sources (primarily Josephus) for the common assertion that Judaeans and Galileans in the early first century were pining for an imminent overthrow of Roman rule and the establishment of a liberating Kingdom of God. In other words, the assertion that apocalyptic prophets like our gospel depictions of John the Baptist and Jesus would have been enthusiastically welcomed at that time lacks evidence.

This post addresses one more significant but (as I hope to demonstrate) flawed plank in O’Neill’s argument. I expect to address one more final point in the Apocalyptic Prophet essay in a future post.

Tim O’Neill begins the next step of his argument with the following verse and without identifying the source of his translation:

“Has come near”, as we shall see, is a disputed translation. But O’Neill is confident that his translation is the correct one, and he even asserts without reference to any evidence that Jesus was speaking of a soon-to-be end of human oppression, not just demonic rule:

The writer of gMark does not depict Jesus explaining what he means and expects his audience to understand – here Jesus is proclaiming that the expected end time had come, that the kingship of God was close and that those who believed this and repented would join the righteous when the imminent apocalypse arrived. Far from being a prophet of doom, Jesus is depicted proclaiming this imminent event as “good news” – the relief from oppression, both human and demonic, was almost here.

Towards the end of his post O’Neill does acknowledge that some scholars do dispute the translation but he sidelines their arguments by characterizing them as “a tactic” that was plotted “in reaction” to threats against conservative doctrines, and he accuses the scholars themselves of unscholarly “wish fullfilment (sic)”, and to cap it all off he infers that Schweitzer’s arguments have so stood the test of time that they are the only ones followed by entirely disinterested scholars: END_OF_DOCUMENT_TOKEN_TO_BE_REPLACED 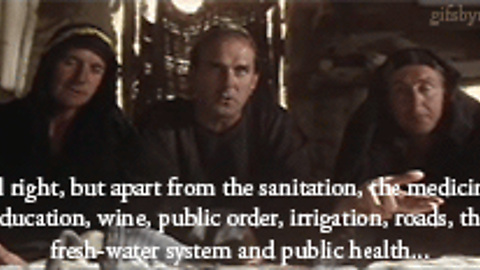 On History for Atheists Tim O’Neill has set out the standard reasons for the view that Jesus was an apocalyptic prophet. He concludes that this particular portrayal of Jesus stands against what conservative and liberal Christians, and even “fringe Jesus Mythicists”, and “many people” generally “would like Jesus to be.” Put that way, one wonders why anyone in a field clearly dominated by academics of some form of Christian faith would find the idea at all respectable. O’Neill, however, assures us that scholars who hold this view are said to be unswayed by “any wish fullfilment (sic)”. Those who disagree are not doing genuine scholarship but looking for ways to rationalize a Jesus who fits their world view.

O’Neill even uses the language of battle to defeat and lay to rest their arguments:

Now, as in Schweitzer’s time, almost all historical Jesus studies is either an endorsement of or a rear-guard action against the unavoidably powerful idea that Jesus was an apocalyptic prophet. . . . . But Schweitzer laid out the arguments against this tactic back in 1910 and more modern attempts to prop up this idea do not have any more strength than they had a century ago. . . . The liberal Christians of the “Jesus Seminar” have attempted a large-scale assault on the idea of Jesus as an apocalyptic prophet. . . . Marcus Borg has been at the forefront of these arguments . . . . Despite the rearguard actions of conservative and many progressive Christians . . . .

We are left with the image of the victorious scholar General, unswayed by any confessional or personal “wish fullfilment (sic)”, standing tall with his boot firmly planted on the defeated “wishes” of conservative and liberal Christians and fringe atheists alike.

We will see in coming posts that address O’Neill’s essay that it posits a rather crude and blunt conception of the nature of scholarly bias. Is finding a Jesus who agrees with our own world-view really the only form of bias to be expected in the pursuit of Christian origins? O’Neill’s language of warfare surely suggests it is.

Some of the posts where I have addressed this topic: The Horsley “Bandits Prophets Messiahs” Archive contains 5 posts including:

An attentive reading of the nativity story in the Gospel of Matthew will even demonstrate that the author of that gospel wrote on the assumption that there were no popular messianic hopes in the time of Jesus but that knowledge of such ideas could only be found among the scribal elites.

O’Neill’s post is long and I have no intention of discussing every detail of it but I trust a few responses to some of its core ideas will be enough to alert readers to some of its flaws and weaknesses. In this post I want to point to a theme I have posted about many times before but will do so once more, this time with reference to what a specialist in Josephus studies has recently written about conditions in Palestine around the time of Jesus.

The setting for the popular welcome of an apocalyptic prophet

O’Neill sets out the common view that Galilean peasants at the time of Jesus were seething with longing to be rid of their Roman oppressors and to be ruled once again “in liberty” as per the promises of their Scriptures. Thus an image is established at the outset of a population that was fertile ground for the seeds of the next apocalyptic prophets to appear on the scene, John the Baptist and Jesus. O’Neill even knows what scriptures and verses were subversively preached and emphasized and what was therefore in the minds of a critical mass of devout peasants of the day.

Devout Jews in this period had inherited a theology whereby they were the Chosen People of God who lived in the Promised Land granted to them by him. But by the time Herod Antipas came to rule Galilee, these ideas were difficult to reconcile with the realities of the average Jewish peasant’s existence.

To begin with, life for our peasant was hard. . . . it was difficult enough to scrape a living for them and their family by farming, herding or fishing, but they also had to pay heavy taxes to the Tetrarch Herod, who was the son of the hated King Herod the Great and, like his late father, a puppet ruler for the Roman Empire. This meant our peasant not only had to pay enough tax to keep Herod Antipas in luxury in his newly built capital of Tiberias – which he had named after his Roman patron, the emperor Tiberius – he also had to pay still more tax for Herod to pass on to his Roman masters. . . . . Not surprisingly, these taxes were resented and those who made a living collecting them were despised as corrupt quislings. The burden of heavy taxation meant that an increasing number of peasants had to give up farming their own land . . . .

. . . . Just as under old Herod the Great, these men held their petty kingdoms as clients of the Roman emperor and were hated for it by most of their subjects. . . . Herod the Great’s sons were well aware of their unpopularity and also inherited their father’s talent for repression – spies were active, uprisings were crushed and troublemakers were dealt with swiftly and painfully.

But our peasant would have known that things had not always been this way. The scriptures he and his neighbours heard read and discussed each sabbath emphasised the ideas already mentioned – that as Jews they were God’s chosen and living in the land he promised to their ancestors. But in the period since the Jewish people had been conquered, dominated and often oppressed by a succession of foreign powers.

Such has been the standard view of Palestine among New Testament scholars for generations. What is the evidence for this scenario? END_OF_DOCUMENT_TOKEN_TO_BE_REPLACED