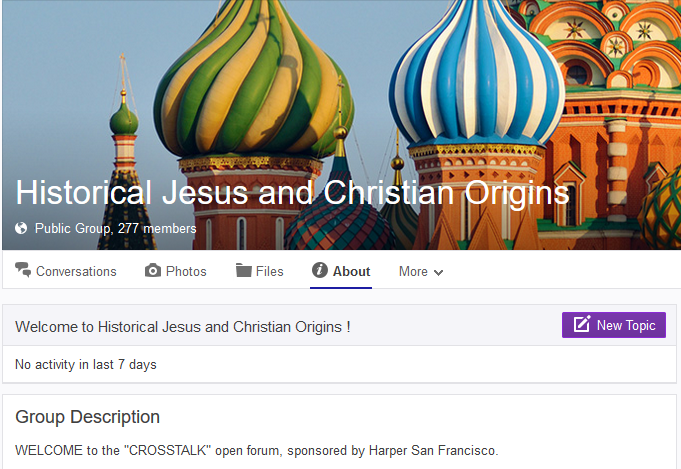 Earl Doherty, author the The Jesus Puzzle website, The Jesus Puzzle and Jesus Neither God Nor Man and other books, and contributor to The Journal of Higher Criticism, made his “public appearance” on a biblical scholars forum on Tuesday, the 9th of February, 1999: Crosstalk. In the light of some unfortunate mischaracterizations of the tone of Earl’s engagement with scholars and the wider public I have decided to post the lead up to Earl’s entrance into that web forum and the initial responses of scholars to his presence. This post only looks at the first half of that intention and concludes with the entrance of Earl to Crosstalk. The next post in this series will set out the posts demonstrating the way the different parties responded to his arrival.

It was a Thursday, 4th February 1999 when he did it. He posted the 4891st post to the Crosstalk forum, a forum for scholarly discussion among biblical scholars. He chose as the title of his post,

and this is what he wrote:

Hello. I’m new to Crosstalk and may not stick around long, but am hoping
someone can help me out here. I’m interested in the historical Jesus. Did such
a person actually exist? I’ll refer you to Earl Doherty’s work at:The basic argument, for those unfamiliar with it, is this: The NT epistles,
all the other 1st century non-canonical Christian writings and most of the
writings well into the 2nd century say nothing of an earthly Jesus: no
ministry, miracles, holy places, Mary & Joseph, the trial, the passion, etc.
The most plausible explanation for this is that Jesus started out as an
entirely divine entity, just like all the other gods in all the other
religions of the day. The idea of a historical human founder was a later
development in Christian mythology.So . . . is Doherty onto something here? I’ve read the lengthy rebuttal given
by Christian apologist J. P. Holding (Doherty provides a link), and it’s
rather feeble. I’ve read articles on Josephus and Doherty’s rebuttal. It’s
fairly obvious that the Testimonium Flavianum is a bad joke which offers not
one iota of support for a historical Jesus. The smaller Josephus reference is
better, but a far cry from compelling evidence.Most people posting messages here would seem to agree that the gospels are
loaded with fiction. To argue a mythical Jesus requires assuming the gospels
are ALL fiction—in other words, just like every other story of every
other god in every other religion in all of history. Is there anything
implausible about this?So help me out here! I like Doherty’s arguments, but am not a scholar and
can’t say whether his premises are true or whether he has been misleading or
has omitted significant information. Thanks in advance for any insightful
replies!Bill

And that’s who started it. We learn later that his surname is Paulson.

>Hello. I’m new to Crosstalk and may not stick around long, but am hoping
>someone can help me out here. I’m interested in the historical Jesus. Did such
>a person actually exist?

No, Doherty is definitely not into something here. And I’m definitely no
Christian apologist, since I’m no Christian – but I still believe that the
mass of data show that a galilean prophet by the name of Jesus was
crucified in Jerusalem on the orders of a roman governor around 30 A.D.
And let’s leave Josephus out of this for a moment. You don’t really need
the Testimonium Flavianum or the notice about James execution to
be practically certain that Jesus really existed and died the way the NT
claims. You just need a little common sense and some knowledge about
the Messianic ideas that were in vogue in Palestine around year 0. There
simply wasn’t any expectations about the coming of a SUFFERING and
CRUCIFIED Messiah. The last thing a jew would have invented if he wanted
to missionize in Palestine around that time was a dead Messiah, specially
one crucified by Israels enemies. The simple fact is that the Jesus movement
one day found itself with a very dead leader. This terrible fact they had to
explain to both themselves and to other Jews. So next they started searching
the Scriptures for clues and “found” them in places like the Servant songs
of Isaiah, Psalm 22 and the Wisdom of Solomon. Also remember that the
ancient Jews read the OT much like many moderns read the prophecies
of Nostradamus – EVERYTHING about the fate of the world, from beginning
to end, can be found there if God opens your eyes to the mysteries.

Absolutely. You have Paul testimony from 50 AD that he knows of

Jesus AND, against wierd theories that Paul made him up, Paul’s
testimony about his relationships to James Peter John whom other
sources indicate knew Jesus personally. Not to mention lots of other
Paul references to people who were adherents of Jesus and who were
so prior to meeting Paul. So if Jesus were invented
it wasn’t Paul who invented him but X the unknown who did so
a considerable period before. It’s just silliness.Steve

On Thu, 4 Feb 1999 16:45:11 -0400, miser17@… writes:
Right on, Steve,.. but don’t say God raised him from the dead and turned him into
some kind of a spirit and all that hocus pocus stuff. The
personal appearances recorded were not imagination. You know
how Meso-America works! The appearances’ effect turned a mob
running away afraid of their shadows into a group who knew
something they’d not known before. They didn’t get the
facts straight but they got a great message – and they really
ran with it!

>The basic argument, for those unfamiliar with it, is this: The NT epistles,
>all the other 1st century non-canonical Christian writings and most of the
>writings well into the 2nd century say nothing of an earthly Jesus: no
>ministry, miracles, holy places, Mary & Joseph, the trial, the passion, etc.

Why are the gospels excluded from this august list of documents? The basic
argument is circular: there is no earthly Jesus because all of a select
list writings say nothing of an earthly Jesus. What was Doherty’s selection
criterion? Apparently, those documents that do not saying anything about
the earthly Jesus. But then there’s a pesky NT epistle, 1 Thess. 2:14-15,
which states that the Jews killed the Lord Jesus, an earthly event.
Predictably, Doherty dismisses this passage as an “obvious interpolation.”
Doherty can only make his argument from silence work by systematically
ignoring the contrary evidence.

To all of whom Bill replied as follows:

Thanks to everyone who has offered input so far. The responses have been
polite, if unconvincing.First, I apologize if I’m posting messages in an odd or inconvenient manner.
I’ve tried repeatedly for two weeks to post from the web site (click “Post”,
type message, click “Send”). It fails every time. I’ve sent pleas of help to
the egroups folks, who say they’re working on the problem. Meanwhile, I’ve
resorted to “posting” by sending e-mail. (Is this common? Do many others post
this way?)