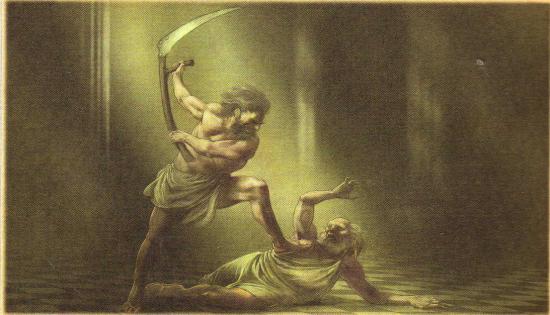 And Earth first bare starry Heaven, equal to herself, to cover her on every side, and to be an ever-sure abiding-place for the blessed gods. And she brought forth long Hills, graceful haunts of the goddess-Nymphs who dwell amongst the glens of the hills. She bare also the fruitless deep with his raging swell, Pontus, without sweet union of love.

But afterwards she lay with Heaven and bare deep-swirling Oceanus, Coeus and Crius and Hyperion and Iapetus, Theia and Rhea, Themis and Mnemosyne and gold-crowned Phoebe and lovely Tethys. After them was born Cronos the wily, youngest and most terrible of her children, and he hated his lusty sire.

But we want to read how the evil deed was done and the curse placed upon Cronos.

(ll. 147-163) And again, three other sons were born of Earth and Heaven, great and doughty beyond telling, Cottus and Briareos and Gyes, presumptuous children. From their shoulders sprang an hundred arms, not to be approached, and each had fifty heads upon his shoulders on their strong limbs, and irresistible was the stubborn strength that was in their great forms. For of all the children that were born of Earth and Heaven, these were the most terrible, and they were hated by their own father from the first.

And he used to hide them all away in a secret place of Earth so soon as each was born, and would not suffer them to come up into the light: and Heaven rejoiced in his evil doing.

But vast Earth groaned within, being straitened, and she made the element of grey flint and shaped a great sickle, and told her plan to her dear sons. And she spoke, cheering them, while she was vexed in her dear heart:

(ll. 164-166) `My children, gotten of a sinful father, if you will obey me, we should punish the vile outrage of your father; for he first thought of doing shameful things.’

(ll. 167-169) So she said; but fear seized them all, and none of them uttered a word. But great Cronos the wily took courage and answered his dear mother:

(ll. 170-172) `Mother, I will undertake to do this deed, for I reverence not our father of evil name, for he first thought of doing shameful things.‘

(ll. 173-175) So he said: and vast Earth rejoiced greatly in spirit, and set and hid him in an ambush, and put in his hands a jagged sickle, and revealed to him the whole plot.

(ll. 176-206) And Heaven came, bringing on night and longing for love, and he lay about Earth spreading himself full upon her.

Then the son from his ambush stretched forth his left hand and in his right took the great long sickle with jagged teeth, and swiftly lopped off his own father’s members and cast them away to fall behind him. 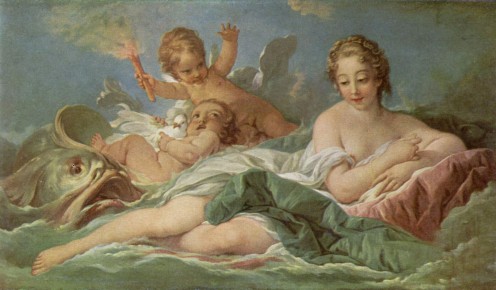 And not vainly did they fall from his hand; for all the bloody drops that gushed forth Earth received, and as the seasons moved round she bare the strong Erinyes and the great Giants with gleaming armour, holding long spears in their hands and the Nymphs whom they call Meliae all over the boundless earth. And so soon as he had cut off the members with flint and cast them from the land into the surging sea, they were swept away over the main a long time: and a white foam spread around them from the immortal flesh, and in it there grew a maiden. First she drew near holy Cythera, and from there, afterwards, she came to sea-girt Cyprus, and came forth an awful and lovely goddess, and grass grew up about her beneath her shapely feet. Her gods and men call Aphrodite, and the foam-born goddess and rich-crowned Cytherea, because she grew amid the foam, and Cytherea because she reached Cythera, and Cyprogenes because she was born in billowy Cyprus, and Philommedes because sprang from the members. And with her went Eros, and comely Desire followed her at her birth at the first and as she went into the assembly of the gods. This honour she has from the beginning, and this is the portion allotted to her amongst men and undying gods, — the whisperings of maidens and smiles and deceits with sweet delight and love and graciousness.

(ll. 207-210) But these sons whom be begot himself great Heaven used to call Titans (Strainers) in reproach, for he said that they strained and did presumptuously a fearful deed, and that vengeance for it would come afterwards.

What a beautiful story. So that’s how a certain personification, the goddess of “sweet delight and love and graciousness” was born!

Prudish Plato was scandalized. Such stories were not fit for public consumption. Wajdenbaum suggests that the authors of Genesis agreed with Plato. Some revision was called for. So the castration was slightly modified to “seeing his father naked”.

And as we read in the previous post, so Wajdenbaum alerts us to the tradition of the castration being preserved in the Jewish midrashim (Midrash Rabba).

Wajdenbaum sees other adaptations of the Greek myths in Genesis, too, but they will have to wait for future posts.

What is interesting here is that gods in other cultures were rewritten as humans in the Jewish one. Or rather, as a special type of human who lived an extraordinarily long time, so we might think of them as a species appropriate to fill the gap between gods and us normal humans. We know Euhemerus rationalized the myths be arguing that the gods were originally tales about great humans. The monotheistic (more or less) biblical authors took the same route and changed the gods into humans.

But back to the Ham story.

Canaan is cursed, for Israel, descended from Shem, is to possess the land. The proof that the biblical story is indeed inspired by Hesiod lies in the retention of the name Japhet, homonym of the Titan Iapetos. In both texts, the youngest son commits a shameless act against the father, and has a brother called Japhet.

This deliberate ‘fingerprint’ is furthermore the heralding of the coming of the Greeks.

One should mention how the Sibylline Oracles, a text of the Roman era, strangely confused the Japhet of the Bible with that of Greek tradition (Sib. Or. III, 105-13). This text considers the Greek gods to have been famous humans. . . . (Argonauts of the Desert, p. 108. My formatting) 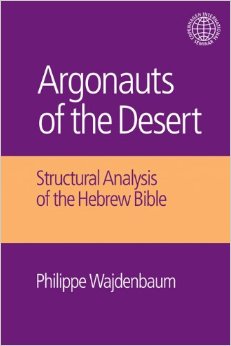 42 thoughts on “Castration of Ouranos and the Drunkenness of Noah”