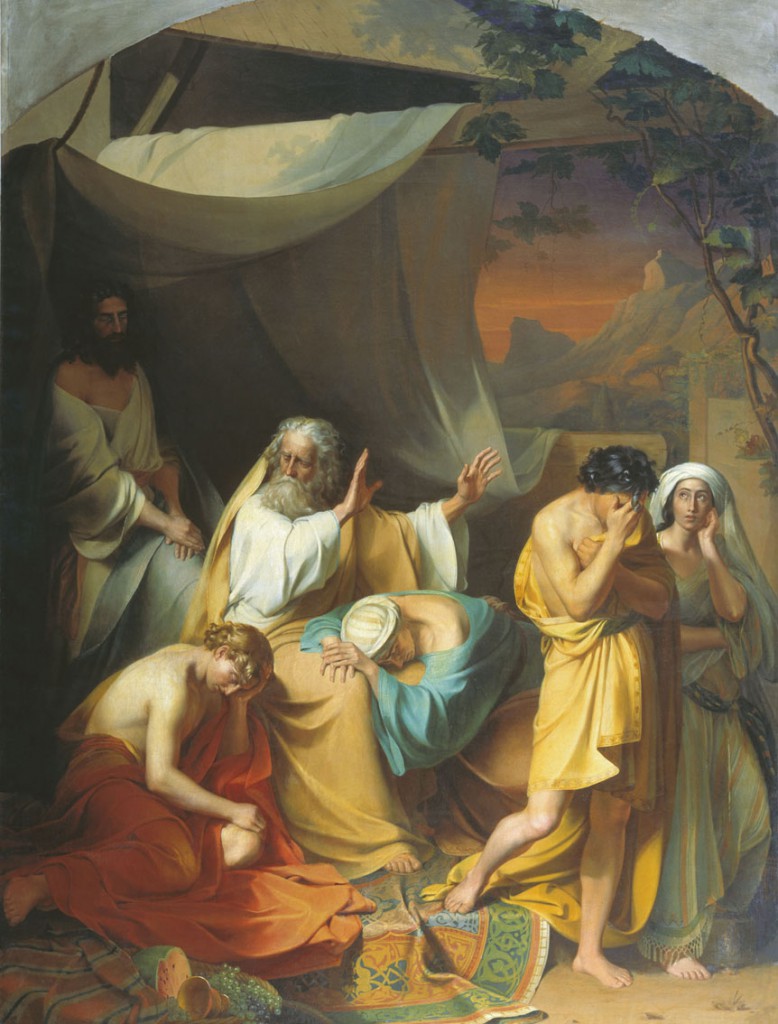 As we read the following books in the Bible we see that the Canaanites were notorious for their sexual license and so were the Egyptians who were also descended from Ham. So perhaps here is an indication that Ham’s sin involved a sex act? Not entirely a satisfactory explanation, is it.

Stepping Back for a Closer Look

Here’s where Avigdor Shinan and Yair Zakovitch take a literary step back and view this episode in its broader structural context.

Before the flood recall that one of the sins that upset God so much was the fallen angels lusting after and procreating with human females. Then not long after the flood Ham does something relating to illicit sex to his father. Sin is ever the human condition. God just has to learn to be patient if he wants humans to populate the earth. But consider another subsequent tale of annihilation — Sodom and Gomorrah. In that case, it is the humans who lust after and want to have sex with the angels who are visiting Lot. Not that they know they are angels, of course, but we do see a curious chiastic or sandwich structure here either side of the Noah-Ham filling.

It gets more interesting as we zoom in for a closer look. Here’s a little diagram produced by the authors to help explain the way it works:

Before the flood the fallen angels “went unto” the daughters of men. Before the destruction of Sodom the wicked men wanted “to have” the male angels sheltering with Lot.

After the flood a son “sees the nakedness” of his father (I think the diagram is a bit askew there); after the destruction of Sodom the daughters have sex with their father Lot. 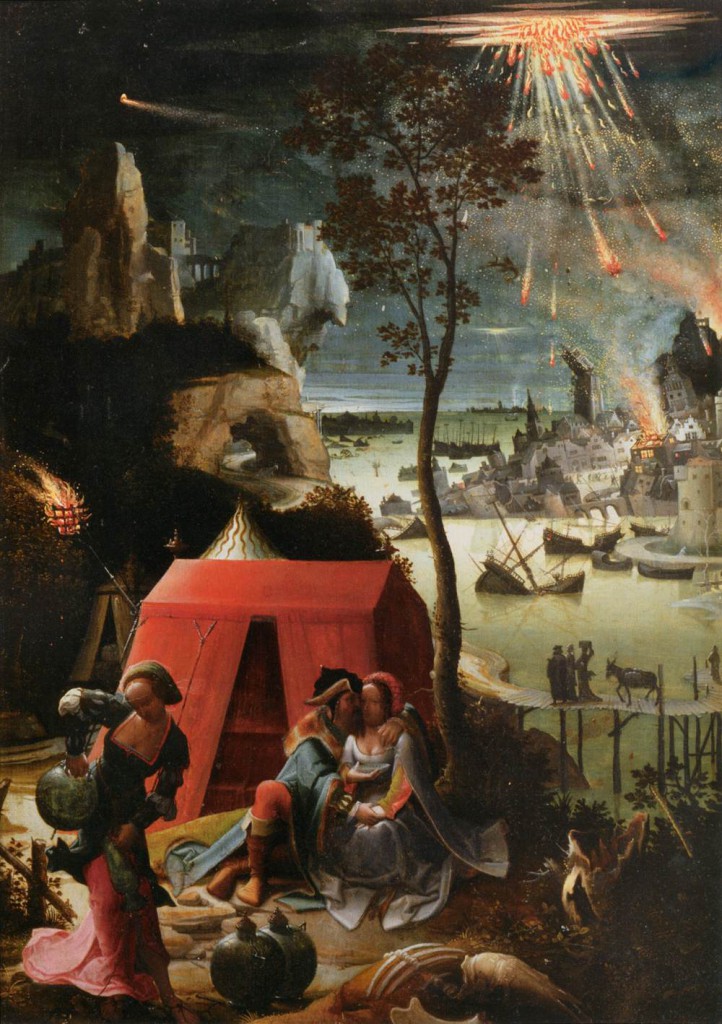 Moreover, getting blind drunk is an essential part of each story. Both Noah and Lot become so drunk that they don’t know what is happening to them.

Noah knows what has happened when he recovers, however. So he curses Ham’s fourth son. We’re coming to that.

Lot does not know what has happened and does not curse anyone. The children are later cursed in the biblical narrative, though (Deut 23:4). Later rabbinic readings, however, did find a way to interpret the Genesis account to mean that though Lot did not know when one of his daughters came to lie with him he did register her getting up and leaving. This appears to have been an attempt to connect the stories of Noah and Lot more closely. Was this interpretation known in Second Temple times? (Genesis — and I’m departing from the Shinan and Zakovitch’s book here — is considered by some scholars to have been of very late composition, even as late as the second century BCE.)

So despite the vagueness and ostensibly virtual innocence of Ham’s “sin” (peeking at his naked father) in the Genesis account, the rabbis recognized that there was something more sinister just below the surface (the Midrash Genesis Rabbah 51:8).

The Unspeakable is Spoken

They (the rabbis) went further. B. Sanhedrin 70a says the following:

“And he knew what his youngest son had done to him.” Rav and Samuel [differ]. One says that he castrated him, the other says that he sexually abused him.

Castration? Where did that come from?

The neighbouring Phoenicians, Hurrites and Greeks all had myths of intergenerational conflict in which a son castrated his father or ruler. Philo of Byblos tells us the Phoenician god Kronos castrated his father Uranus with his own knife; the Hurrite god Kumarbi rebelled against the sky god Anu and replaced him as the ruler of the heavens, even biting his knee and swallowing his genitals. We know of the Greek myth of Kronos castrating his father Uranus, god of the sky.

Shinan and Zakovitch inform us that

what was told in the polytheistic nations surrounding Israel about the battles of gods was transferred, in the monotheism of the Bible, to the human realm. (p. 135)

It follows then, Shinan and Zakovitch explain, that the story of Ham and Noah developed in three stages:

It would also explain why Noah cursed Ham’s fourth son.

The mythic tradition of a son castrating his father in order to prevent his father from having more sons and “dilute the older son’s inheritance.” So the Midrash ha-Gadol to Genesis 9:25 says:

The Holy One, blessed be He, meant to issue four sons from Noah who would inherit the four winds of the earth. Ham said: I will castrate my father so that he will not produce a fourth son, in order that [this fourth son] will not share the world with us.

Rashi in the commentary says that the castration was performed “for inheriting the world.”

Now as Shinan and Zakovitch point out, an act of castration would leave some fairly obvious evidence for the sobered-up Noah to notice. It would also explain why Noah cursed Ham’s fourth son. If Noah could no longer have a fourth son then Ham’s fourth son was to be cursed.

The Pentateuch stepped back from documenting a castration upon a man who was elsewhere called “righteous” (Genesis 6:9). So Noah’s emasculation was replaced with a lesser evil, being raped by his son.

The “see nakedness” expression and the correlations with the Sodom narrative make this interpretation fairly clear.

Censorship finally sanitized the whole episode to infer that Ham was guilty of “seeing” his father naked and instead of covering his shame rushing to tell his brothers.

Interestingly the Bible retains an ambiguity here — as it does in many other narratives. The reader is not quite sure what the author intended. Alternative possibilities are always on the table.

Why Did God Want It In the Bible At All?

But why should such a tale enter Holy Writ at all? S and Z answer:

the story disparages two nations with whom ancient Israel was in contact, Egypt and Canaan, and calls for Israel’s utter separation from them. It is also possible that the story was . . . used to justify the Israelites’ conquest of the Land of Canaan. At least that is what is stated overtly in the Talmud: “The Canaanites said, The Land of Canaan belongs to us. . . . Geviha son of Persia said to them, . . . But [you are wrong, since] it is written in the Torah, ‘Cursed be Canaan a servant of servants shall he be unto his brethren.’ [Now:] if a slave acquires property, to whom does he belong, and whose is the property?” (B. Sanhedrin 91a)

S and Z also suggest a morality tale to warn against drunkenness.

In any event, we can, at the least, say that the obfuscation of the story’s objectionable contours was evidently enough to assure its place in the Bible. (p. 137)

I often wonder of such intriguing explanations how much of their account really is “true” and how much is owed to the wisdom of hindsight. Either way, it’s a plausible and interesting tale. It also underscores the point of Hector Avalos that the Bible is, or should be, an irrelevant book for any sort of moral guidance this day and age.