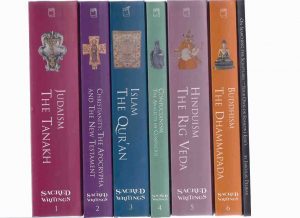 Someone says to you, “That’s just fine.” You immediately try to figure out from the previous conversation or immediate environment what “that” means, what is “fine” about it, and why it is “just” fine.

Tone and inflection in the way “That’s just fine” will be taken into account. You will recall that previously you had asked to taste your dinner host’s special reserve. You will have noticed since then the broken wine bottle on the dining room floor. You will draw upon your background information to understand that your host is ironic when angry.

You will, further, believe that the speaker understands all of these factors, too, and that he knows you also grasp them.

That’s significant. You stop processing and working out the right interpretation of the communication once its function is clear.

That’s not how one interprets a religious authoritative text, however. Such normal rules of communication — called “relevance criteria” — are bypassed.

Believers generally assume that the words in a sacred text

are authorless, timeless and true. As a result, people do not apply ordinary relevance criteria to religious communications. (p. 92)b

Since the divine text is essentially “authorless” — the author is thought to be a channel for the mind and wisdom of God — there is no thought or need to try to infer the intent from the way the words are spoken or the context in which they are heard, etc. (The preacher’s gesticulations and intonation are his own, not the deity’s.)

Timelessness implies that cues from the surrounding environment, background knowledge, and memory are all irrelevant — or equipotentially relevant, which amounts to irrelevance.

And that is why God’s message can apply to any and all contexts in an indefinite number of different ways. Certainly believers do interpret God’s word in specific ways for specific contexts, but

they have no reason to ever stop interpreting.

Unlike normal communication that context, memory, surroundings, intonation, etc may lead you to understand as metaphor, satire, or lighthearted nonsense, etc. communication from God that is accepted as true on faith can never be false, deceptive or merely figurative.

(Of course the Gospels do have Jesus speaking figuratively, but the meaning or doctrine itself is always seriously literal.)

Ordinary preoccupation with lying and false belief in communication therefore plays no role in interpretation (or at least no consistent role). Neither can failed attempts at verification or confirmation of this or that aspect of the information represented in a religious statement, or inferred from it, undermine the audience’s belief in the statement’s truth. (p. 92)

So in the face of disconfirming evidence, the believer follows the logic of faith and

tries harder to understand the deeper truth and to strengthen religious beliefs.

We have seen a classic illustration of this in discussions with the Pastor of the Diamond Valley Church in the comment thread following the recent post How Literary Imitation Works. Evidence that demonstrates literary mimesis is an indicator or imaginative fiction even in ancient historical works is set aside by redefining “literary mimesis” or re-interpreting the challenger’s intent and motives or even revising and changing the terms of their original argument — efforts that would normally never be tolerated by either party in normal everyday communications. The rules of communication are quite different between a sacred text and a believer, and any attempt to try to make that religious communication subject to the rules of normal everyday communication will always be deflected by an invisible force-field.

(My own view is that the ability of the believer to deflect such challenges with this otherwise unacceptable response in normal communication appears to give the believer confidence in the truth of his or her faith, and a greater appreciation for the divine inscrutability of this truth to unbelievers.)

Atran cites an experiment that illustrates this. It is written up in the Journal of Personality and Social Psychology, 1975 (32:176-184), titled, “Rational processing or rationalization: The effect of disconfirming information on a stated religious belief”.

After reading a bogus article on a new finding from the Dead Sea Scrolls that seemed to contradict Christian doctrine, religious believers who also believed the story reported their religious beliefs reinforced.

For believers, then, confidence in religious doctrine and belief can increase through both confirmation and disconfirmation of any factual assumptions that may accompany interpretation of those beliefs.

So what, then, is faith?

So faith in religious belief is not simply another mechanism to somehow reduce cognitive dissonance by ignoring or reinterpreting information that contradicts one’s belief system.

If faith is, in part, willingness to suspend ordinary pragmatic constraints of relevance, then beliefs held in faith become not only immune to falsification and contradiction but become even more strongly held in the face of apparent falsification or contradiction.

Atran opines that the believer who is faced with disconfirming evidence for his or her beliefs will assume that his or her current understanding or interpretation is incomplete and that he or she has more to learn and understand about the depths of those spiritual beliefs.

Or in other words, discussions with believers about the validity of their religious faith inevitably become little more than intellectual training exercises for both parties. Neither side ever will yield, nor can they. They are playing by quite different rules of communication.

18 thoughts on “Fantasy and Religion: One Fundamental Difference (Or, Why God’s Word Will Never Fail)”