Question: If Muslim sympathy for terrorism is not driven by religious fanaticism, then why does support for terror seemingly exist more among Muslims?

Answer: Muslims hold no monopoly on extremist views and are, in fact, on average more likely than the American public to unequivocally condemn attacks on civilians.

A [2007] study shows that only 46% of Americans think that “bombing and other attacks intentionally aimed at civilians” are “never justified,” while 24% believe these attacks are “often or sometimes justified.” 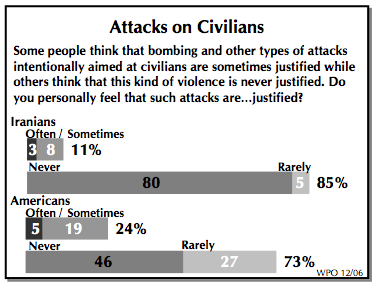 Contrast those figures with data taken from the same year from some of the largest Muslim countries, Indonesia, Pakistan, Bangladesh and Iran.

Agree that “bombing and other attacks intentionally aimed at civilians” are “never justified“: END_OF_DOCUMENT_TOKEN_TO_BE_REPLACED

The title was a tweet by Sam Harris: https://twitter.com/samharrisorg/status/337313832814919680 in response to the horrific terrorist murder of Lee Rigby in London. I told someone in a recent comment that I would do a post explaining my perspective on what lies behind Harris’s response. (In that same comment thread one can see a video in which Sott Atran goes some way to explaining what a soccer club has to do with terrorism.)

Firstly, who is Scott Atran? From Wikipedia:

He has studied and written about terrorism, violence and religion, and has done fieldwork with terrorists and Islamic fundamentalists, as well as political leaders. . . .

. . . he received his PhD in anthropology from Columbia University. . . .

Atran has experimented on the ways scientists and ordinary people categorize and reason about nature, on the cognitive and evolutionary psychology of religion, and on the limits of rational choice in political and cultural conflict. His work has been widely published internationally in the popular press, and in scientific journals in a variety of disciplines. He has briefed members of the U.S. Congress and the National Security Council staff at the White House on the The Devoted Actor versus the Rational Actor in Managing World Conflict, on the Comparative Anatomy and Evolution of Global Network Terrorism, and on Pathways to and from Violent Extremism. He was an early critic of U.S. intervention in Iraq and of deepening involvement in Afghanistan, and he has been engaged in conflict negotiations in the Middle East. . . .

Atran’s debates with “new atheists” Sam Harris, Dan Dennett, Richard Dawkins and others during the Beyond Belief symposium on the limits of reason and the role of religion in modern society highlight the differences between “new atheists” who see religion as fundamentally false and politically and socially repressive, or worse, and those like Atran who see unfalsifiable but semantically absurd religious beliefs as historically critical to the formation of large-scale societies and current motivators for both conflict and cooperation.

Atran has taught at

I am belatedly catching up with two of his books, In Gods We Trust and Talking to the Enemy, after having read a few of his scholarly journal and online writings.

I mentioned Atran’s video presentation — there is also follow up to that and Atran’s exchanges with Sam Harris at The Reality Club, Beyond Belief webpage (note on that page there are several in depth comments by Atran). Of his exchange with Sam Harris he writes: END_OF_DOCUMENT_TOKEN_TO_BE_REPLACED