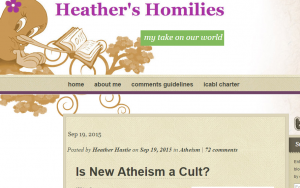 Sometimes the most slap-dash of posts get the most attention and my recent post, Atheism, Cults and Toxicity, is the latest instance. At this moment it has garnered 111 comments and today Heather Hastie of Heather’s Homilies has responded to it with Is New Atheism a Cult? with another 72 responses at this moment.

The irony behind all of this kerfuffle is that I had decided to check out a book Jerry Coyne had cryptically complained about (it was written “by an Atheist Who Shall Not Be Named” he said for some unexplained reason). I only read the first few pages of C.J. Werleman’s book —

(is there some curse pronounced on anyone who names the author? Tough — I don’t agree with Coyne’s totalitarian tactic of erasing from all records memories of those he deems to be his opponents and banning all contrary political thought from his comments pages)

— anyway, as I was saying, I only read the first few pages of this work by an author (named C.J. Werleman) and was immediately struck by how “true” it rang with my own personal experience of exchanges with fervent supporters of Coyne’s, Harris’s and Dawkins’s views on the role of the Islamic religion in Islamic extremism today. It also struck a chord with my very similar experiences with some of the less scholarly advocates of the Christ Myth theory.

So I posted a few chunks of Werleman’s early pages that I believed hit the nail on the head in their description of the toxic tone of these Harris-Coyne-Dawkins and Murdock supporters with respect to the specific question of Islam and religion as forces of evil today.

Before I continue let me say that yes, I do agree that Islam’s teachings are socially retrograde in many respects but I also recall how it is only in recent years that Christianity itself and some Indigenous belief systems have begun to struggle out of many medieval and prehistoric values that have brought misery and even death in their wake; I oppose toxic and oppressive religions as anyone who has read anything about my past knows; and I do fully support any and all constructive programs aimed at encouraging liberalization with humanistic values in all faiths.

But let’s back track a step. This current flurry began when I attempted when Coyne posted the following words of mine directed to him:

Jerry, what concerns me about the various statements made by yourself along with Dawkins and Harris is that they are not informed by specialist scholarship — sociologists, anthropologists, political scientists et al — in Islamic and terrorist studies. Rather, they seem to be fueled by visceral reactions without the benefit of broader understanding and knowledge that comes from scholarly investigations into these phenomena. It almost appears to some of us that your criticisms are willfully ignorant of the scholarship. I find these visceral responses coming from trained scientists difficult to understand.

But I do not believe that religion curses and generates evil in everything it touches, and I do not believe that Islamic beliefs themselves cause people to become terrorists. I do not believe Harris’s simplistic aphorism “As a man believes so will he act”. I know damn well that I do not follow through on many things I believe and I am very capable of changing my beliefs to suit my behaviour. And I know that there is abundant research in the fields of anthropology, psychology, political science, sociology and other scholarly areas — much of it undertaken by academics who risk their lives to talk with terrorists and their supporters — that makes a nonsense of Harris’s claim.

Anyway, back to the topic. I only read and quoted a few sections of Werleman’s book, pointing out that I had some reservations about the use of the word “cult” and wondered if “tribal” would be more appropriate, and was focusing primarily, perhaps exclusively, on the toxic tone of recent commenters (Coyne included) on the discussion of Islamic extremism. Coyne called my post “intemperate rantings“. At least he has not reduced me to a blogger “who shall not be named” status yet.

Heather Hastie was more measured in her response and from the few posts of hers I have read I have by and large been impressed with Heather’s avoidance of the “intemperate rantings” of the likes of Coyne. At least Heather has, unlike Coyne, permitted me in the past to post comments on her blog attempting to set out a reasoned objection to some of the remarks about Islamic terrorism that have appeared there.

I do take Heather’s point that perhaps the word “cult” is so inflammatory for some readers that its use only turns people off before they are even prepared to read or hear what I have tried to say.

From the little I have read I do have some confidence that I could at least have a discussion with Heather on these questions.

Here I will make just a few general comments in response. I have prioritized other tasks ahead of taking all the time it would require to read through all of the comments there. It took me a few days even to catch up with the comments on my own post here. So a few notes for now:

From the fact that religion is an evil it does not follow that the world would be a better place without it. That is because our judgments about evil are usually particular, not universal.

Here is an analogy to explain what I mean. Most insects are pests, but we know that their eradication would disrupt the eco-systems that sustain us, and ultimately make the world uninhabitable.

Similarly, religion may be noxious, but perhaps, for all we know, a world without religion would be a much worse place than it is today.

For my part, I insist on religion’s many intellectual and moral vices. But I have suggested earlier that religions can satisfy profound emotional needs, many of them fundamental. And now I would add that no-one really knows whether these satisfactions can be relinquished without dire consequences, especially for those I described – in a sympathetic, Fanonian phrase – as the wretched of the earth.

I think it is important not to miss the distinction between atheism and anti-theism in Werleman’s comments. Anti-theism is a hostile mindset that seeks to attack religion at all opportunities as by nature evil or damaging. We had a Prime Minister who was always acting like that and many Australians sighed with relief when he was replaced recently.

If we are going to take on religion we need to do our homework and understand what it is we are engaging with. Popular caricatures and prejudices don’t cut it. I expect scholars to know better than to ignore and even ridicule the serious research of their peers. See Where the New Atheists Have Let Us Down for details. As I have quoted several times before from Pataki, we better be sure we are not going to destroy the things we value in our environment before we start on a wholesale eradication of the pests in it that we don’t like.

A while ago I posted what an anthropologist has seen as the difference between religious and other types of thought — and then more recently posted on this topic again — but this sort of scholarly understanding is nowhere in sight in the polemics of Coyne, Dawkins and Harris. See

Fantasy and Religion: One Fundamental Difference (Or, Why God’s Word Will Never Fail)

Religious Credence is Not Factual Belief: 1

Religious Credence is Not Factual Belief: 2

I expect people like Coyne, Dawkins and Harris to live up to their professional obligations as public intellectuals and use their status to educate and inform the public instead of fanning ignorance and bigotry.

Meanwhile, my suggested reading in addition to the above for anyone interested is AU’s comment at http://vridar.org/2015/09/14/new-atheism-versus-old-atheism-and-what-is-a-cult/#comment-73177 and others on Heather’s site and here. My own responses sit nearby.

Exploring the Links between Beliefs and Behaviour

“On how to be completely wrong about radicalisation: the curious case of Jerry Coyne” — ***** This points to where the whole recent kerfuffle began

Oh yes — also my new series that is actually engaging with some serious research and explanations so is definitely not for anyone who wants their prejudices massaged:

How Terrorists Are Made

Not forgetting the many other posts from the past archived under terrorism and Islam.

18 thoughts on “New Atheism, Tribalism and Ignorance of How Religion and Humans Work”