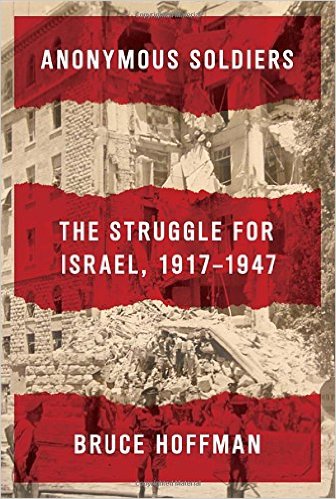 There are a number of interesting similarities between

There are also obvious differences but this post is taking a look at the similarities that struck me on reading Anonymous Soldiers: The Struggle for Israel, 1917-1947 by Bruce Hoffman.

Before looking at the parallels notice Hoffman’s striking concluding remarks on the relationship between the two terrorisms (my own bolding and formatting, pp. 483-4):

The Irgun’s terrorism campaign in fact is critical to understanding the evolution and development of contemporary terrorism. The group effectively directed its message to audiences far beyond the immediate geographic locus of its struggle — in New York and Washington and Paris and Moscow as much as in London and Jerusalem. This taught a powerful lesson to similarly aggrieved peoples elsewhere, who now saw in terrorism an effective means of transforming hitherto local conflicts into international issues.

Thus the foundations were laid for the transformation of terrorism in the late 1960s from a primarily localized phenomenon into the security problem of global proportions that it remains today.

Indeed, when U.S. military forces invaded Afghanistan in 2001, they found a copy of Begin’s seminal work, The Revolt, along with other books about the Jewish terrorist struggle, in the well-stocked library that al-Qaeda maintained at one of its training facilities in that country.

Extraordinary Rendition and Guantanamo for the “worst of the worst”

The cabinet approved the decision two days later, and on October 19 [1944], 251 imprisoned Jewish terrorists whom the authorities deemed the most dangerous were secretly flown from Palestine to British-occupied Eritrea aboard eighteen DC-3 transport aircraft accompanied by fighter escort. (p. 153)

From there, Lankin was transferred under heavy guard to police headquarters at the Russian Compound for interrogation. Later that day he was brought to the adjacent central prison facility and, deemed the most dangerous of the lot, quickly transferred to Acre prison and then exiled to the secret terrorist detention facility in Eritrea. (p. 189)

The Geneva Convention said not to apply to terrorist prisoners who do not have POW status . . . . END_OF_DOCUMENT_TOKEN_TO_BE_REPLACED