Not wanting on a Sunday to spend too much time at one sitting responding to James McGrath’s gaffes I will respond in small segments to his latest “review” of Richard Carrier’s On the Historicity of Jesus on the Bible and Interpretation site. Once I’ve done enough of these I may combine them into a single response and forward to Bible and Interpretation to see if they will post them there.

His [Carrier’s] treatment of myth, and how to determine whether a work is largely or entirely myth, is less satisfactory. Carrier writes,

Characteristics of myth are

(1) strong and meaningful emulation of prior myths (or even of real events);

(2) the presence of historical improbabilities (which are not limited to ‘miracles’ but can include natural events that are very improbable, like amazing coincidences or unrealistic behavior); and

(3) the absence of external corroboration of key (rather than peripheral) elements (because a myth can incorporate real people and places, but the central character or event will still be fictional).

The citations refer to the previous two interview posts.

Miami is the first one with David Fitzgerald; Logicast is Daniel’s follow up podcast.

The time references match the preceding time marker in each of the two posts.

So [Logicast, 49:00] means that the source for my statement can be found by beginning to read from the 49:00 minute header in Daniel’s followup podcast post.

Daniel Gullotta is a young student (26 years old, just starting a Masters course at Yale) who is looking forward to breaking into the field of biblical studies as a professional scholar [Logicast 49:00, Miami 72:40 and blog bio]. The field is winding back in many universities but Daniel is doing all the right things — especially with his self-promotion via his blog and other social media [Logicast, 29:00, 1:29:30] — to improve his chances of eventual employment. All credit to him and we wish him well as we do anyone embarking on a new career.

What I would like to do in this post is to raise some of the dynamics — psychological and social — that I noticed at work in the recent exchanges I recently posted here. 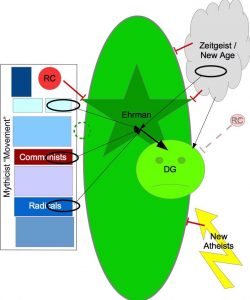 What interested me as I wrote up my notes on these two exchanges was not so much the arguments themselves — they were at a very basic level and sometimes misinformed — but the way the issues were framed and what the flow of conversation revealed about the different perspectives at play.

In other words, what is really going on when challenges to mythicism are raised and when there are discussions between mythicists and historicists? What is it that lies behind the arguments themselves and that perhaps indicates why arguments on neither side “work”?

It’s a question I could explore more widely by examining a wide range of exchanges and denunciations but I also have to invest in a full time job so that’s not going to happen today. I am, however, revising the many comments on the old Crosstalk discussion forum where Earl Doherty made his first public appearance in the world of scholarly exchanges and would like to share a similar set of observations from those exchanges one day. Till then, we start with a very small case-study based on one “budding scholar” in two online interviews.
END_OF_DOCUMENT_TOKEN_TO_BE_REPLACED