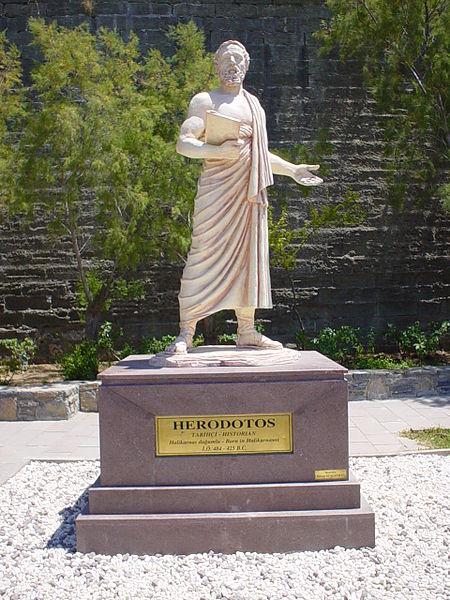 It is a naive mistake to approach every ancient narrative that purports to be about past events on the assumption that we can take it at its word — unless and until proven wrong.  Even the famous “father of history”, the Greek “historian” Herodotus, turned fables into history. The Hebrew Scriptures (Old Testament) does the same. If we are to understand how to interpret the New Testament literature we might find it useful to study ancient Hellenistic literature in general. Knowing how ancient authors worked across a wide spectrum of genres in the cultural milieu preceding and surrounding the time of the Gospels might lead to an understanding otherwise lost to us. If nothing else, a broad understanding of how ancient texts “worked” will alert us to possibilities that need to be considered and evaluated when we do read the Gospels.

I focus in this post on Herodotus and draw out lessons from modern critical studies that might profit us in reading the Gospels and Acts, perhaps even the New Testament epistles.

In school I learned that Herodotus was “a credulous collector of anecdotal data”. That was wrong. That perception was the result of taking his writings at face-value and making modern-reader judgments about that face-value reading. That’s not good enough and leaves the door open to many misreadings of the text.

A far greater impediment to our inquiry was the accepted belief, with which we are at first concurred, that even when the stories themselves were not truthful, Herodotus was truthfully reporting what he had learned during his perambulations, and concomitantly that Herodotus believed he was writing an historical work.

We soon realized that this was not valid.

Rather it was exactly what the author, Herodotus, who knew what he was doing, wanted his readers to believe.

(p. xi, The Relationship Between Herodotus’ History and Primary History by Sara Mandell and David Noel Freedman, 1993, my own formatting and emphasis)

The first lesson to learn in understanding any literature is that we need to be aware of the difference between the real author, the one who is actually composing the words, and the implied narrator, the voice the reader hears speaking as she follows the words of the narrative.

One of the earliest lessons I remember from my high school classes when we were being taught the art of writing was the importance of finding the “voice” we wished to use. Who I am in real life is not identical to the persona I project when I set out a narrative. Writing a narrative is a little like acting. The real author adopts a certain personality through which to project the tale.

So when one reads, say, History by Herodotus or the biblical book of Genesis, it is a mistake to assume that the narrator of the words one hears in one’s head is identical to the real person who composed those words.

No matter what the reader believes, the implied narrator is a character created by the author. What he says, he says because the author depicts him doing so. His world is circumscribed by the author’s narrative vision. It is of no consequence whether or not he is identified as fictive in the narrative itself. If the work is in a definable literary genre . . . the implied narrator is a literary persona. (p. 14)

This is fundamental to any proper interpretation and understanding of literature. It is absolutely essential for historians who rely entirely on literary sources.

As long as we deemed Herodotus an historian of any sort, albeit not in the modern sense, we could not understand fully the structure of the History of the real and primal role that theology plays in it. These only became comprehensible when we began to view his work as the historical type of fiction it really is. When we realized that the History is a theologically charged prose epic in which two different but related genres, the Documentary Novel and the Roman à Clef, are combined, we began to see that Herodotus was not simply a credulous collector of anecdotal data.

It was at this point that we understood that the named narrator, Herodotus, was not the author himself. He was an implied narrator, whom the real author called by his own name. Interestingly enough, there is evidence suggesting that this was understood by the author’s audience. (p. xii)

Similarly, I think there is much to learn about the Gospels once we begin to understand this principle of literary analysis. Some scholars do of course understand this very well, and I have discussed works by some, such as Mary Ann Tolbert and Dennis MacDonald. Some of the criticism of their works appear to me to have arisen from a failure to understand the significance and implications of the difference between the implied narrator and real author.

Why we have been misled

Mendell and Freedman show us that both Herodotus and the authors of the Primary History (Genesis to 2 Kings) have long been mistakenly thought of as historians. They were really literary artists who created fictional narratives with theological messages in such a way that they presented the illusion of history.

Aristotle understood the difference between the real author and the implied narrator, but he still classified Herodotus as a historian. Cicero even called Herodotus the “father of history”. Many have ever since continued to read these works as “histories” primarily because the authors

successfully created the illusion by virtue of [their] superb literary craftsmanship. (p. xii)

The second essential thing to understand

Once we realized that neither Herodotus’ History nor Primary History should properly be classified as histories save under a confessional rubric, we began to approach the problem from the perceptual standpoint of Analytic Criticism whereby any work, even a seemingly historical one, is to be treated as iconic. (p. xiii)

By “iconic” here Mandell and Freedman mean that a literary work needs to be studied in the same way we might treat any other work of art. Just as a painting, say, of a famous battle or historical figure first and foremost needs to be studied, understood, and analyzed as a work of art — according to all the tricks and devices that went into its construction — so we need to study a work of literature in the same way. It is a mistake to seek first of all what the painting of the battle can tell us historically about the real battle that took place. Any such coincidences between the iconic representation of the battle and the real battle that once happened and is now only a memory require a separate study and analysis, with different tools and pieces of evidence.

This is not to say that there is always only a very slight resemblance between, say, a work by an ancient historian and real events. It means that once we understand the literary composition for what it is, only then are we in a position to interpret any relationship between the literary content and the real world. (Sometimes familiarity with a genre enables us to do this almost subconsciously. But when studying the literature of ancient cultures it is a mistake to quickly assume much overlap between our own customs and values and theirs.)

This is probably the most frequently broken rule among studies of early Christian history and the historical Jesus that I have encountered. Studies simply assume the texts they are reading relate directly, and without any need for argument, to a certain historical world. And that “certain historical world” is imagined as an extrapolation of the narrative itself. The literary narrative is simply assumed to be a mirror of real events (however distorted the mirror might be). There is a literary Galilee, and this is understood, or simply assumed, to be related directly to a real Galilee. The same narrative speaks of a literary breaking apart of heavens and directs its readers to focus on a person up there who is speaking as something falls down from there to earth, but that fact does not lead modern readers to conclude that we should imagine this corresponds to a real breaking apart of heavens, etc. The fact that the same author narrated both settings and images (heavenly quakes and earthly Galilee) in the same narrative, and therefore was conceptualizing a narrative which quilted settings that could only come together in his own imagination, and the significance of this fact, tends to escape a lot of readers, scholars included. Sure there is a real Galilee, but in the mind of the author a story is being created that means that the real Galilee becomes an imaginative world, and then a literary world.

To understand a literary narrative it needs to be treated as iconic first and foremost.

This post has not yet started to cover what I originally intended. Once I began to type I realized I had to step back a little to explain what comes before, then that led to a further step back, and so on.

I have been itching to start this series of posts for a few years now. So hopefully in fits and starts over the next few months (in between a couple more on the Ascension of Isaiah and a few others) I can complete what I think is worthwhile understanding about ancient historians, in particular Herodotus, and how this compares with the “historical writings” of the “Old Testament”. I think this is worth understanding if there is any chance that the Gospels themselves owe anything to those OT historical writings.