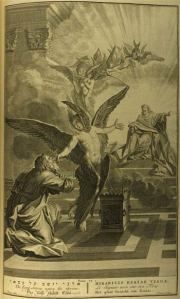 Earl Doherty has argued that the New Testament epistles, unlike the Gospels, portray Jesus as a heavenly being who was crucified by demons in heavenly places, and that it was this event that was revealed to early Christian apostles such as Paul by visionary or mystical spiritual experiences or insights into their readings of Jewish scriptures. They described the gospel that they preached as a “mystery” that had been revealed to them by the Spirit of God in what they believed were “the last days”. The crucifixion of Jesus was not an earthly event enacted by human agencies. The New Testament books and other extra-canonical writings give ample evidence for their being a wide variety of “Christianities” in the two or three centuries, but the canonical Gospel narratives and the book of Acts have so completely dominated our understanding of Christian origins that we have failed to see just how “riotously diverse” Christianity was before and even after the Gospels were written. Our canonical gospels — the orthodox narrative of Jesus — and the book of Acts were not widely known among Christian communities until the mid to later half of the second century. We know this from the testimonies of various ancient texts.

Doherty’s arguments are extensive and founded on a wide spectrum of evidence both within the New Testament writings and beyond. But there is one ancient document that appears to describe the very scenario that Doherty believes is found in writings such as the epistles of Paul and other New Testament letter-writers, in particular the Epistle to the Hebrews. This apocryphal text is The Ascension of Isaiah, which in its present form is a relatively late second-century Christian document. I will discuss some details of the dating of this document in a future post, but can make it clear now that scholarly introductions to translations of this text generally acknowledge that the current complete text was made up by stitching together at least two originally separate texts, and that along the way various Christian copyists or editors have added their own Christian messages into the original.

The original layer may not have been Christian at all, but Jewish sectarian. It is not impossible that the author of the New Testament’s Epistle to the Hebrews knew of one of the original Jewish documents that became the basis of the later Ascension. Hebrews speaks of a prophet being sawn in half, and the Ascension of Isaiah is the only other text we know of that testifies to this happening to a prophet. Even apart from that possibility, the earlier (quite likely) pre-Christian text was composed in the latter part of the first century.

But to cut to the chase. Here are the highlights of one of the pre-orthodox-Christian passages of what became known as The Ascension of Isaiah. (Many of us I know have read this in full from the online versions or in other books. This is for those who find ploughing through the lengthy compressed text and rambling details, especially with scholarly commentaries, hard going.)