‘OK, here is how we do things,’ began Kosti’s account of the corporation in which he worked. ‘No one tells anyone what to do. We choose freely the persons or teams that we want to work with and also how much time to devote to competing projects. Everything in our company is in flux. Staff move about, new teams are formed, older projects die, new undertakings are concocted. No bosses to order anyone around. Spontaneous order and personal responsibility overcome the fear of chaos.’

This constant flux was a design feature of corporate life in the Other Now, Kosti explained. When hierarchies are used to match people with particular roles and teams, the result is clumsy, inefficient, oppressive. Status anxiety and the need to satisfy one’s superiors make full transparency impossible. People are kept in the dark about the relative attractiveness or drawbacks of working with particular managers or colleagues, how happy or dysfunctional teams are, how rewarding or boring different projects. Hierarchies simply perpetuate and expand themselves, resulting in a terrible mismatch between a person’s standing and what they actually contribute. Even the hierarchy’s great advantage, of ensuring that all posts are staffed at all times, is a hidden loss.

Under the flat management model, Kosti acknowledged, there are frequent gaps. But the fact that they are observable to all makes them useful. When people notice an empty spot where David’s desk used to be on the sixth floor, and then discover on the company’s intranet that he moved to the fourth floor to work with Tammy, Dick and Harriet, everybody learns something important about the value of the work being done in that nook on the fourth floor. With people voting freely with their feet, an ongoing collective assessment takes place of each project’s relative value. If unpredictability is the price of staff autonomy, it is a small one to pay, Kosti reported.

‘But surely there must be a hierarchy when it comes to recruitment?’ Costa asked. ‘Surely there are menial tasks that no one would choose to perform?’

‘No, no hierarchy is involved at any level – not even in recruitment or the assignment of shitty chores,’ replied Kosti. New staff are taken on informally, he explained, without the need for a personnel department. If Tammy and David need, say, a graphic designer to work with them but cannot find one within the firm, they post a notice on the intranet announcing themselves as the initial search committee, inviting others to join them if they wish. Once assembled, the impromptu committee places an ad on the company’s public website to solicit applications. The committee then compiles a shortlist and conducts interviews, which anyone in the company is entitled to witness either remotely, via the intranet, or in person. Finally, Tammy, David and the rest of the search team post their recommendation, and anyone who wants to is able to cast a vote either against or in favour of their chosen candidate.

The same process is used, no matter the job, including for secretarial or run-of-the-mill accounting positions for example. New staff are recruited on the understanding that, once in the company, no one can force them to be secretaries or accountants. And indeed, Kosti explained, it is often the case that people recruited for these tasks eventually branch out into more creative roles in a way that no hierarchy would ever allow. But more often than not, perhaps out of a sense of moral obligation, they provide the services for which they were originally employed for sufficiently lengthy periods.

‘But what about pay?’ Costa was impressed but still incredulous. ‘Surely someone must decide who gets what?’

‘No, no hierarchy is involved in determining pay either,’ came Kosti’s answer. A company’s income is divided into five slices. One slice, 5 per cent of all revenues to be precise, is retained by the government. The remaining 95 per cent is divided into four: an amount to cover the firm’s fixed costs (such as equipment, licences, utility bills, rent and interest payments), an amount for R & D, a slice from which basic payments to staff are made and, lastly, a slice for bonuses.

The relative size of those four slices is decided collectively on a one-person-one-vote basis. Anyone who wishes to propose a change in the current distribution has to put forward their new formula. For example, if they want an increase in the amount allocated to basic pay, they will need to say which other slice or slices will see the necessary reduction. If only a single alternative proposal for the following year’s distribution is put forward, a simple two-way referendum suffices. More often than not, though, many competing business plans are put forward, each accompanied by an intricate rationale. Here a more complicated voting system is used.

Before voting, staff are given at least a month to read up on each proposal, to debate them and to form their preferences. They are then invited to rank the proposals in order of preference on an electronic ballot form. If no plan wins an absolute majority of first preferences, a process of elimination takes place. The plan with the fewest first preferences is knocked out and its first preference votes are reallocated to the voters’ second preferences. This simple algorithmic process is repeated until a plan has acquired more than half the votes cast.

Having determined the amounts of money the company will spend on the various slices, the basic pay slice is then divided equally among all staff – from those recently employed as secretaries to the firm’s star designers or engineers.

Costa appreciated the simplicity of the system but could not see how the fifth slice, the bonuses, could be distributed democratically. ‘Surely any decision as to who gets what bonus must involve a hierarchy?’ he insisted.

‘Do you recall the Eurovision Song Contest?’ Kosti asked.

Costa did remember that hideous celebration of kitsch.

‘Then you may recall the voting scheme at the end of all the awful singing: every participating country was given points to allocate to the songs of every other country, but not to its own song. The song that gained the most points won. We use essentially the same allocation system to determine the bonuses of each member of our corporation,’ Kosti explained.

Every year, just before the New Year’s holidays, Kosti is given one hundred merit points to distribute among his colleagues. He can give all his one hundred merit points to a single colleague whom he thinks has done a uniquely exceptional job or he can spread them out more thinly among colleagues whom he thinks have made above-average contributions to the company. Meanwhile, all his colleagues do the same, resulting in each member of the company receiving a percentage of the total merit points, and it is this which determines the percentage of the bonus fund they receive. If, for example, Kosti collects 3 per cent of the total merit points, his personal bonus will be 3 per cent of the firm’s total bonus fund – whose size has already been determined via the preferential voting algorithm.

Perhaps because of his Mediterranean background, Costa’s immediate concern was that such a system was open to abuse. ‘If that were a Greek or Italian company,’ he confided to Eva weeks later, ‘I have no doubt that most people would seek reciprocal agreements with their friends and allies: “I’ll award you my one hundred points if you return the favour.”’ But when he put this to Kosti, he received an interesting answer. . . . .

And so the ideas are fleshed out.

The above extract is from

The first two boxed inserts are descriptions of the real company on which the Other Now idea is based:

The EconTalk section addressing pay and bonuses is from:

The interview that introduced me to all of the above: 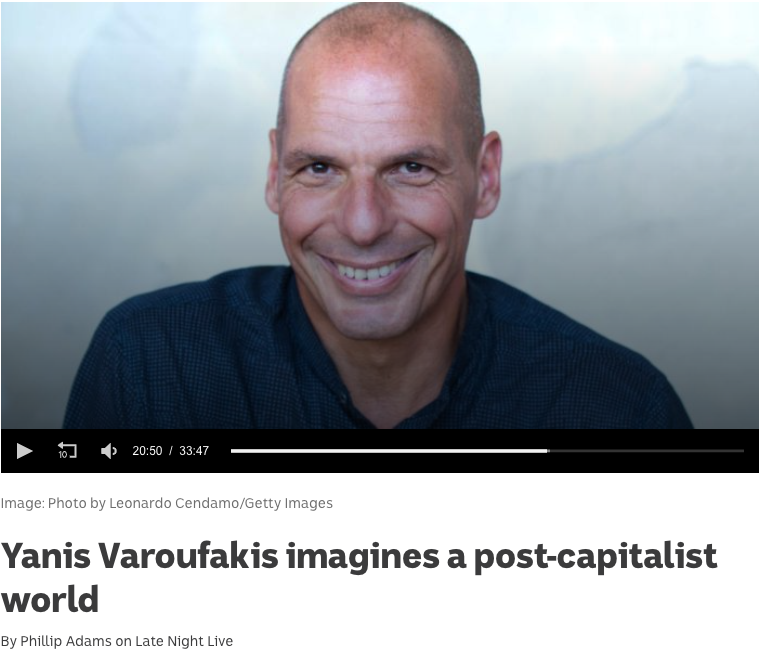 7 thoughts on “No bosses, no wages, no problem”