When we began Nanine Charbonnel’s [NC] discussion of the various Old Testament figures being epitomized in Jesus we had only two references to Adam, both in Paul’s writings (Rom 5:17-19 and 1 Cor 15:45-49). (The same post also introduced NC background discussions on the Adam figure per Paul Ricoeur and Philo of Alexandria.) A commenter rightfully asked if those citations could be used as evidence of a more general idea among early Christians. That was when I recalled discussions about the Gospel of Mark’s portrayal of Jesus as a New Adam in the wilderness “with the wild beasts and angels ministering to him”. Not everyone is convinced that that wilderness image of Jesus in Mark’s gospel was intended as a pointer to Jesus being a New Adam, so in this post I will share more detailed discussion on Adam typology throughout the Gospel of Mark.

But first, here is an interesting (and related) perspective on John the Baptist in the Gospel of Mark:

Joseph and Asenath 16:8, 14 The bees of the Paradise of Delight [i.e. the Garden of Eden (cp. the LXX at e.g. Gen iii.23 and Ezek. xxxi.9) have made this honey, and the angels of God eat of it, and no one who eats of it shall ever die. . . . And all the bees flew in circles round Aseneth, from her feet right up to her head; and yet more bees, as big as queens, settled on Aseneth’s lips.

Even apart from these Elijan connections, the description of John the Baptist has a strongly eschatological flavor. His garment of camel hair, his leather belt, and his food of wild honey lend him a certain primal, back-to-the-earth quality, reminiscent of the Garden of Eden narrative and Jewish elaborations thereof. The hair garment and leather belt, for example, recall Gen 3:21 LXX, in which God clothes Adam and Eve with leather tunics (chitōnas dermatinous), and the honey is reminiscent of Joseph and Asenath 16:14(8), where Aseneth eats a honeycomb made by the bees of the Garden of Eden; several later Jewish legends, moreover, describe a river of honey in Eden (see Ginzberg, 5.29 n. 79). These Edenic features anticipate Mark 1:13, where Jesus is with the wild animals in the wilderness, a scene that also recalls Eden (cf. Drury, “Mark 1.1-15,” 31). In both passages the reminiscence of Eden looks forward to the eschaton, since the end-time will be, in a sense, a return to paradise, when the “natural” world was all that existed. Even some non-Jewish readers might have picked up this hint; Virgil’s Fourth Eclogue 30, for example, mentions miraculous provision of honey as a feature of the coming Golden Age. (Marcus, 1, 157)

Following up the suggestions of Adam intertextuality in the Gospel of Mark has led to an overabundance of resources. Many posts could be written to cover all of the hints and nuances. Instead, I follow primarily key points in the commentary by Joel Marcus and some of his references.

Joel Marcus explains why Jesus’ sojourn in the wilderness is based primarily on Adam typology:

NOTE on “were serving”: Gk diëkonoun. On its most concrete level, diakonein describes the waiter’s task of supplying someone with food and drink, though the word then comes to mean “to serve” generally and becomes particularly important in this transferred sense in early Christianity . . . . In our passage, however, the concrete meaning is to be preferred; it makes sense in the context, corresponds to 1:31, and coheres with the Adamic typology that can be observed throughout the narrative, since a Jewish legend depicts “ministering angels” . . . preparing food and drink for Adam in Eden (b. Sanh. 59b). Diakonein can also, like Heb ‘bd, mean “worship” (see e.g. Josephus Ant. 7.365), and this may be a secondary nuance in our passage, in view of the legend in which Adam is worshiped by angels . . .

After being driven by the Spirit into the wilderness, Jesus spends forty days there—like Elijah, who was also sustained by an angel’s provision of food (1 Kgs 19:5-8; cf. 1 Kgs 17:5-6). But the primary biblical model for our passage’s portrait of Jesus is not Elijah but Adam (cf. Mahnke, Versuchungsgeschichte, 28-38, and Mell, “Jesu Taufe”). Adam was tested by God’s adversary, the snake, who in later Jewish interpretation became Satan (see e.g. Apoc. Mos. 17:4). Adam, moreover, lived at peace with the wild animals before the Fall (Gen 2:19-20), and according to a Jewish legend, his meals were catered by angels—catering being one of the nuances of diêkonoun (“were serving”) in 1:13 (see the NOTE on “were serving” in 1:13). The motif of forty days also appears in an influential pseudepigraphal account of the Fall (Adam and Eve 6). In this same account, which probably reflects a widespread tradition (see G. Anderson, “Exaltation”), Adam is raised by God to a preeminent position, opposed out of jealousy by Satan, and worshipped by the other angels (Adam and Eve 12-15). Similarly, in Mark 1:9-13 Jesus is proclaimed or even installed as God’s son, combated by Satan, and worshiped by angels, if diêkonoun is given one of its alternate meanings (see the NOTE on “were serving” in 1:13). This interpretation has the advantages of linking our passage with the previous one and of providing a motivation for Satan’s hostility to Jesus, namely jealousy. And it fits in with the Markan prologue’s general emphasis on new creation . . .  (Marcus, 1, 169)

Walking about, they searched for many days but did not find anything like they had in paradise. They only found what animals eat. Adam said to Eve: “The Lord gave these things to animals and beasts to eat. Ours, however was the angelic food.

Adam said to Eve: “. . . I will do forty days of fasting. You, however, arise and go to the Tigris River and take a stone and stand upon it in the water up to your neck in the depth of the river. Let not a word go forth from your mouth since we are unworthy to ask of the Lord for our lips are unclean from the illicit and forbidden tree. Stand in the water of the river for thirty-seven days. I however, will do forty days in the water of the Jordan. Perhaps the Lord will have mercy on us.”

The Devil answered: “Adam what are you saying to me? On account of you I was cast out from heaven. When you were formed, I was cast out from the face of God and was sent forth from the company of the angels. When God blew into you the breath of life and your countenance and likeness were made in the image of God . . . .

Having gone forth Michael called all the angels saying: ‘Worship the image of the Lord God, just as the Lord God has commanded.’ Michael himself worshipped first then he called me and said: ‘Worship the image of God Jehovah.’ I answered: ‘I do not have it within me to worship Adam.’ When Michael compelled me to worship, I said to him: ‘Why do you compel me? I will not worship him who is lower and posterior to me. I am prior to that creature. Before he was made, I had already been made. He ought to worship me.’

Hearing this, other angels who were under me were unwilling to worship him.

Michael said: ‘Worship the image of God. If you do not worship, the Lord God will grow angry with you.’
I said: ‘If he grows angry with me, I will place my seat above the stars of heaven and I will be like the Most High.’

Even the dove is an image from the beginning of creation, according to Philo. Philo interpreted the two doves offered as a sacrifice by Abraham (Gen 15) as symbols of wisdom: one was God’s wisdom, the other was the image of God’s wisdom planted in Adam and humanity, so in one sense both representing the one wisdom. Wisdom, we know from the early Jewish writings (Proverbs 8; Wisdom 7), was present at the beginning of creation. The dove may be another sign that the Gospel of Mark opens with the image of Jesus as the beginning of a new creation. 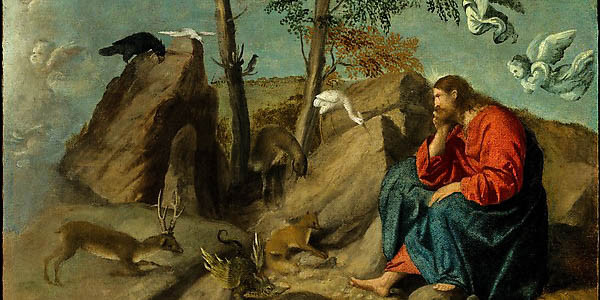 The Testament of Naphtali 2:26

Not forgetting, of course, the creation account where God made the animals and brought them to Adam.

Preaching the Kingdom of God  END_OF_DOCUMENT_TOKEN_TO_BE_REPLACED