We have a humble request. Does anyone out there have a PDF copy of Jonathan Z. Smith’s doctoral dissertation, The Glory, Jest and Riddle. James George Frazer and The Golden Bough (1969)? I thought I’d found it today, but it’s incomplete. This appears to be one of those oft-cited, rarely read works.

Here are some excerpts from A.J. Droge‘s article in the Caesar journal, “Jesus and Ned Ludd: What’s in a Name?” (2009)

Droge begins with two quotations that, despite their difference in tone, are saying much the same thing:

To start a religion all you need is a name and a place. (Jonathan Z. Smith)

Droge segues into noting that to think through the implications of those two sayings is to realize:

first, that religions are not “founded” because there are no “founders” in the first place;

second, that there is no originating moment of insight, or “big bang,” that sets any religion in motion and drives it into the future;

third, that when it comes to the study of the religious imaginary, invention is everything.

Luddism was not generated by the dramatic actions of any one individual nor by the sudden emergence of class consciousness but rather by a single, forceful act of naming—the creation and appropriation of the eponym, “Ned Ludd.” 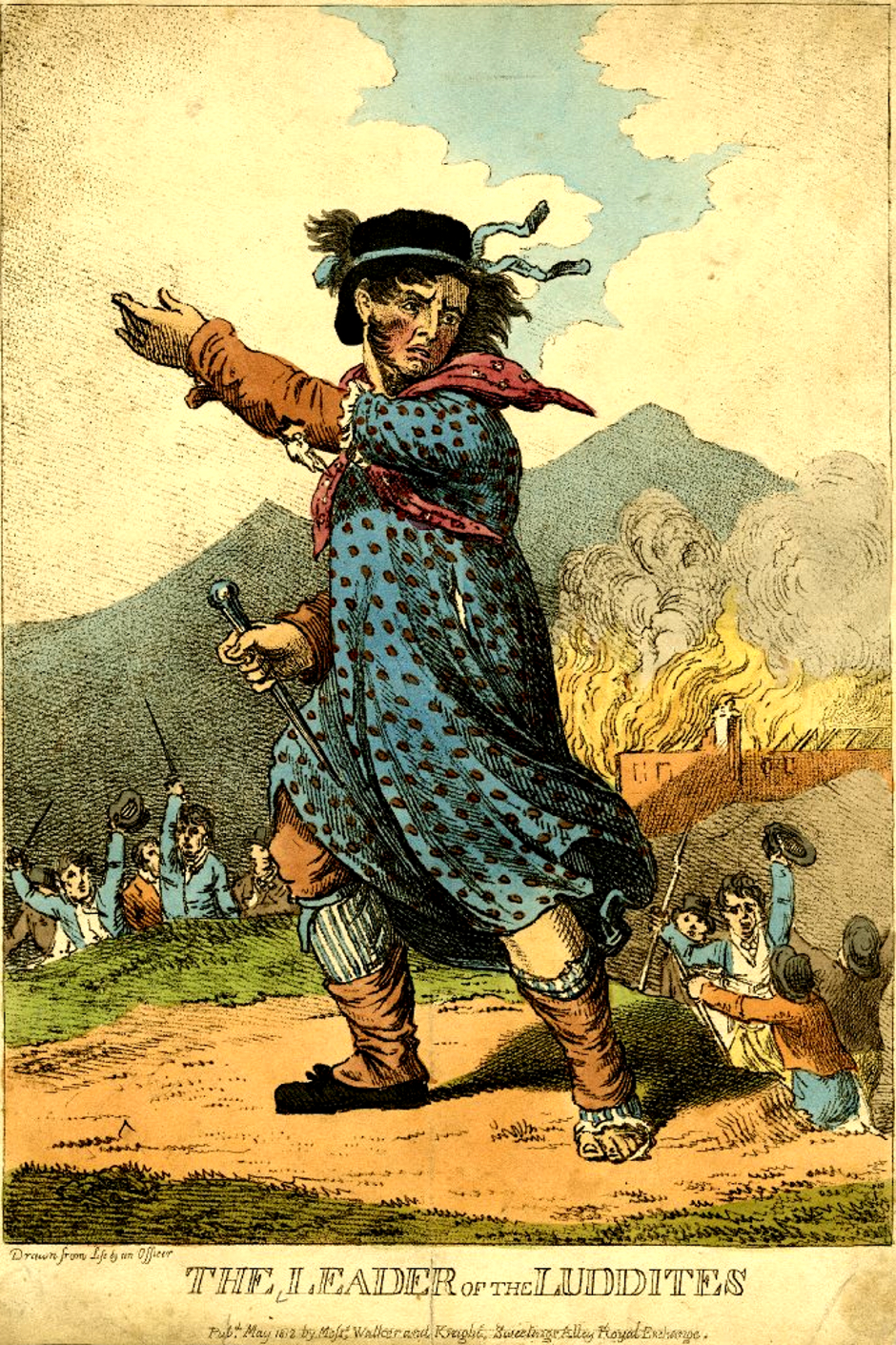 Take Ned Lud[d], for example. Luddism (so called) was a movement of early nineteenth-century English textile workers who, when faced with the replacement of their own skilled labor by machines, turned to destroying textile machinery to preserve their jobs and their craft. The movement began with an attack on wide-knitting frames in a shop in the vicinity of Nottingham in 1811 and in the next two years spread to surrounding cities. The “Ludds” or “Luddites,” as they called themselves, were generally masked, operated at night, and often enjoyed local support. They swore allegiance not to any British king but to their own “King Ludd” (also referred to as “Captain” or “General Ludd”). Some three decades earlier, in 1779, one Edward (“Ned”) Lud[d] is said to have broken into a house in the vicinity of Leicestershire and “in a fit of insane rage” destroyed two machines used for knitting hosiery. Soon, whenever a stocking-frame was found sabotaged—something that had in fact been occurring in Britain since the Restoration in the late seventeenth century(!)—folks would respond with the catchphrase, “Ludd must have been here.” By the time his name was taken up by the frame-breakers of 1811, the “historical” Ned Ludd had become “King Ludd,” now a more-than-human, nocturnal presence, roaming the hosiery districts of England.

What is called the “Luddite movement” consisted of

a number of sometimes conflicting tendencies, including appeals to centuries-old traditions, customs, and statutes regulating the textile industry, trade-unionist ambitions to gain a seat at the table with manufacturers, and Jacobin calls to overthrow king and aristocracy alike. Luddism turns out not to have been monolithic but a series of overlapping protests with discrete sets of discourses generated under unique local circumstances. . . . Luddism was not generated by the dramatic actions of any one individual nor by the sudden emergence of class consciousness but rather by a single, forceful act of naming—the creation and appropriation of the eponym, “Ned Lud[dJ.”

The study of the origins of Luddism is a study in social formations and mythmaking. Historians are not preoccupied with uncovering the “historical Ned Ludd”. Studies of the rise of Luddism treat it as a very human event that can be explained as other events are through historical inquiry. Searches preoccupied with uncovering some lost moment of “genius”, “dramatic visionaries”, “charismatic leaders” are not called for.

The myth of Luddism has not died. Stories of the exploits of Luddites spread a romantic interest in the nineteenth-century events and today various protest movements are known to have embraced and reshaped the myth:

Forgive me for pointing out the obvious, but these neo-Luddites have nothing in common with their alleged forefathers other than the name. Instead, they are engaging anew in the imaginative and dynamic processes of social formation and mythmaking, in the construction of genealogies and the invention of histories, as they re-confect and re-deploy the figure of Ned Ludd in their own image and in their own struggles with what they see as the dehumanizing effects of rampant globalization, the dark forces of technology, and postmodernity.

That is, the figure of Ned Ludd has taken on a meaning that lies well beyond any historical figure. It is easy to lose sight of this fact because the renewed myths generally claim to be speaking of the “historical” Ludd. But we know that such historical reconstruction is another form of mythmaking.

Could any of us—at least those of us who construct our-selves as historians—imagine participating in the “quest of the historical Ned Ludd”? Or imagine writing books with titles like Meeting Ned Ludd Again for the First Time (cf. Borg 1995) and The Incredible Shrinking Ned Ludd (cf. Price 2003)? Or imagine ourselves pronouncing that “Ned Ludd and his first followers . . . were hippies in a world of Georgian yuppies” (cf. Crossan 1994: 198)? Or finally, and more pertinently, contributing a paper to “The Ned Ludd Project”? The answer to all four questions should be a resounding “No!”

Esteemed colleagues, haven’t we learned by now that the Nazarene simply can’t be killed? That he always manages to escape? And that, rather like Ned Lud[d] himself, he will always be out there somewhere, a more-than-human presence roaming the countryside of the religious imaginary? So let us be content simply to pronounce that, like Ned Ludd, Jesus [of Nazareth] was “probably apocryphal.” Please, just let it go at that and let us turn our attention to matters much more interesting and important when it comes to the invention of Christianity (and the invention of Christian “origins”). Take Marcion, for example.

Droge, Arthur J. “Jesus and Ned Ludd: What’s in a Name?” Caesar: A Journal for the Critical Study of Religion and Human Values 3 (2009)