There can be little doubt that many of the gospel stories are derived from the Jewish Scriptures: Jesus in the wilderness reworks the nation Israel’s and the prophet Elijah’s sojourn there; Jesus feeding the multitudes and raising the dead are surely inspired by comparable miracles by Elijah and Elisha and many more. What I find particularly interesting about this process is that the Jewish Scriptures themselves invite, or even entice, readers to undertake that very kind of rewriting we find in the gospels.

Embedded in the narratives of the books from Genesis to 2 Kings are two types of repetition:

Look at opening chapters of Genesis and the creation of Adam. There are actually two stories of Adam’s creation in the first two chapters and each one is different. In the first Adam and Eve are evidently created equal. In the second Eve is an afterthought who was contemplated only after God finally realized that he absentmindedly overlooked giving Adam the same sort of sexual partner he had provided for other animals. Here is Robert Alter’s interpretation of what is going on here:

Just such a technique of placing two parallel accounts in dynamically complementary sequence is splendidly evident at the very beginning of the Hebrew Bible. There are, of course, two different creation stories. The first, generally attributed to P, begins with Genesis 1:1 and concludes with the report of the primeval sabbath (Gen. 2:1–3), probably followed, as most scholars now think, by a formal summary in the first half of Genesis 2:4: “This is the tale of the heavens and the earth when they were created.” The second version of the creation story, taken from the J Document, would then begin with the subordinate clause in the second half of Genesis 2:4, “When the LORD God made earth and heaven … ,” going on to the creation of man, the vegetable world, the animal kingdom, and woman, in that order, . . . . 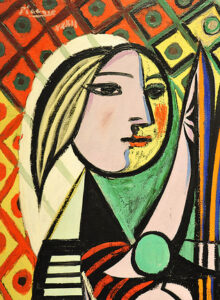 The decision to place in sequence two ostensibly contradictory accounts of the same event is an approximate narrative equivalent to the technique of post-Cubist painting that gives us, for example, juxtaposed or superimposed, a profile and a frontal perspective of the same face. The ordinary eye could never see these two at once, but it is the painter’s prerogative to represent them as a simultaneous perception within the visual frame of his painting, whether merely to explore the formal relations between the two views or to provide an encompassing representation of his subject. Analogously, the Hebrew writer takes advantage of the composite nature of his art to give us a tension of views that will govern most of the biblical stories—first, woman as man’s equal sharer in dominion, standing exactly in the same relation to God as he; then, woman as man’s subservient helpmate, whose weakness and blandishments will bring such woe into the world.

A similar encompassing of divergent perspectives is achieved through the combined versions in the broader vision of creation, man, and God. God is both transcendent and immanent (to invoke a much later theological opposition), both magisterial in His omnipotence and actively, empathically involved with His creation. The world is orderly, coherent, beautifully patterned, and at the same time it is a shifting tangle of resources and topography, both a mainstay and a baffling challenge to man. Humankind is the divinely appointed master of creation and an internally divided rebel against the divine scheme, destined to scrabble a painful living from the soil that has been blighted because of man.”

Similarly with the rise of David. Again, two incompatible stories about his rise to power are told side by side. Whoever combined the stories was not interested in making them look like a seamless whole but left the inconsistencies for all to see and no doubt talk about.

The effectiveness of composite narrative as a purposeful technique is even more vividly evident when the primary aim is the presentation of character. The most elaborate biblical instance is the introduction of David, which, as has been often noted, occurs in two consecutive and seemingly contradictory versions (1 Samuel 16 and 17). In the first account, the prophet Samuel is sent to Bethlehem to anoint one of the sons of Jesse as successor to Saul, whose violation of divine injunction has just disqualified him for the kingship that was conferred on him. . . . Following the anointment, David is called to Saul’s court to soothe the king’s mad fits by playing the lyre, and he assumes the official position of armor-bearer to Saul. In the second account, David is still back on the farm while his older brothers (here three in number rather than seven) are serving in Saul’s army against the Philistines. There is no mention here of any previous ceremony of anointing, no allusion to David’s musical abilities or to a position as royal armor-bearer (indeed, a good deal is made of his total unfamiliarity with armor). In this version David, having arrived on the battlefield with provisions for his brothers, makes his debut by slaying the Philistine champion, Goliath, and he is so unfamiliar a face to both Saul and Abner, Saul’s commander-in-chief, that, at the end of the chapter, they both confess they have no idea who he is or what family he comes from, and he has to identify himself to Saul. . . . 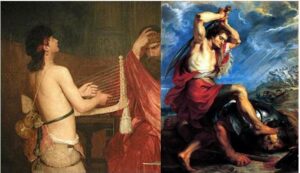 Both stories, though drawn from disparate sources, are necessary, however, in order to produce a binocular vision of David. In this case, the inference of a deliberate decision to use two versions seems especially compelling, for the redactor of the David story, unlike the redactor of Genesis, is not working with traditions sanctified by several centuries of national experience. One may infer that he had greater freedom as to what he “had” to include than did his counterpart in Genesis, and therefore that if he chose to combine two versions of David’s debut, one theological in cast and the other folkloric, it was because both were necessary to his conception of David’s character and historical role. Much the same point has been made by Kenneth R. R. Gros Louis in an intelligent essay on the larger David story: “But surely whoever put the narrative into this final form was aware of the inconsistency too; such inconsistency in close proximity in a narrative is more than an author’s nodding; it is the equivalent of deep sleep.” . . . . .

[T]he joining of the two accounts leaves us swaying in the dynamic interplay between two theologies, two conceptions of kingship and history, two views of David the man. In one, the king is imagined as God’s instrument, elected through God’s own initiative, manifesting his authority by commanding the realm of spirits good and evil, a figure who brings healing and inspires love. In the other account, the king’s election is, one might say, ratified rather than initiated by God; instead of the spirit descending, we have a young man ascending through his own resourcefulness, cool courage, and quick reflexes, and also through his rhetorical skill. All this will lead not directly to the throne but, as things usually happen in the mixed medium of history, to a captaincy; further military successes, a devoted following; the provocation of jealousy in the king, which brings about his banishment; a career of daring action, subterfuge, hardship, and danger; a bloody civil war; and only then the throne. Without both these versions of David’s beginnings and his claim to legitimacy as monarch, the Hebrew writer would have conveyed less than what he conceived to be the full truth about his subject. . . .

Embracing complexity and contradictions
The fundamentalist view of the Bible that “there are no contradictions in God’s word” would seem to turn the Bible into a collection contrary to the purpose of its authors. One can imagine the discussions, the debates, in which authors and many readers must have once engaged.

Other Vridar posts exploring this same question of contradictory narratives in the Bible:

Explaining (?) the Contradictory Genesis Accounts of the Creation of Adam and Eve (this post focuses on comparisons and contrasts with the methods of the Greek historian Herodotus)

Comparing the Rome and Israel Foundation Stories, Aeneas and Abraham

Another but with a less direct approach:

From Babylonia to Moses and Enoch to Paul: Questions

In regard to larger blocks of narrative material, the characteristic biblical method for incorporating multiple perspectives appears to have been not a fusion of views in a single utterance but a montage of viewpoints arranged in sequence. Such a formula, of course, cannot smooth away all the perplexities of scribal and editorial work with which the biblical text confronts us; but we are well advised to keep in mind as readers that these ancient writers (and their redactors), like later ones, wanted to fashion a literary form that might embrace the abiding complexity of their subjects. The monotheistic revolution of biblical Israel was a continuing and disquieting one. It left little margin for neat and confident views about God, the created world, history, and man as political animal or moral agent, for it repeatedly had to make sense of the intersection of incompatibles—the relative and the absolute, human imperfection and divine perfection, the brawling chaos of historical experience and God’s promise to fulfill a design in history. The biblical outlook is informed, I think, by a sense of stubborn contradiction, of a profound and ineradicable untidiness in the nature of things, and it is toward the expression of such a sense of moral and historical reality that the composite artistry of the Bible is directed.

Reiterations: “all reflecting a single transcendent reality throughout the Bible’s narrative”

Then there is the other type of repetition: the reverberations of the same motifs, images, actions in different contexts and with augmented meanings. Here I will cite Thomas L. Thompson and his thoughts in The Mythic Past. END_OF_DOCUMENT_TOKEN_TO_BE_REPLACED