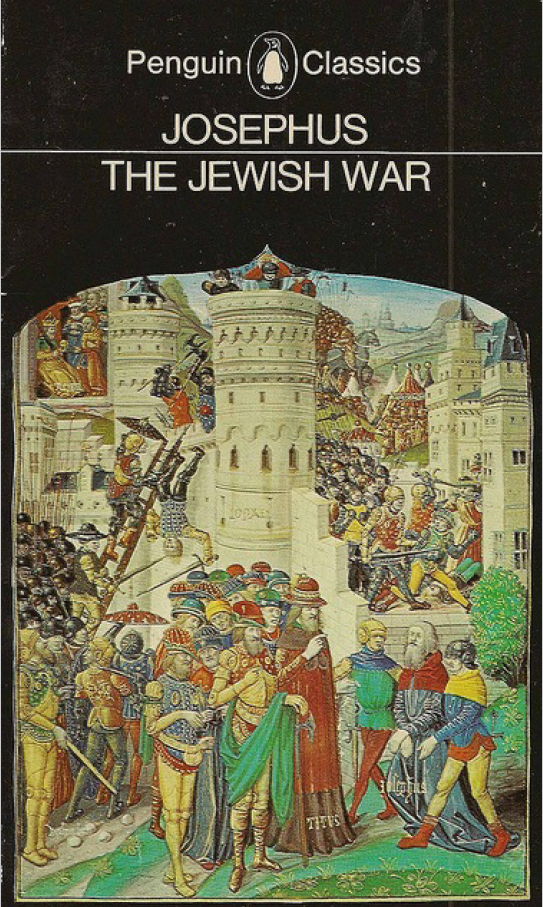 The Caesar’s Messiah myth proponents appear to involve Josephus in some sort of conspiracy to pacify the Jews. Their primary method, according to their view, is that Josephus was involved in the creation of the Christian religion as a kind of pacifist-messiah cult to replace their traditional supposedly militaristic messiah cult said to be found in their Scriptures.

I recently had a difference of opinion with Joseph Atwill, author of Caesar’s Messiah, over whether Josephus’s history of the Jewish War was an “official” history. I had written that it was not an “official” history in the sense that it was commissioned or ordered to be written and vetted by the emperor. (The claim I was responding to was that “Josephus was employed to write the official history” and that is quite simply incorrect.) Joseph Atwill was nevertheless right to correct me insofar as I should have added that the emperor Titus, Vespasian’s son, at least did like Josephus’s history and ordered it published, at least according to Josephus’s own account. In his Life or autobiography Josephus boasted about his history of the Jewish War:

Now the emperor Titus was so desirous that the knowledge of these affairs should be taken from these books alone, that he subscribed his own hand to them, and ordered that they should be published; and for king Agrippa, he wrote me sixty-two letters, and attested to the truth of what I had therein delivered…

Why would Titus have done that if the Caesar’s Messiah theory of Atwill is correct and that history of the war apparently exposed the “truth” behind the gospels, that Jesus was a pacifist foil to Titus the conqueror?

Yet there were many other historians writing about that war at the time and Josephus compares his work with theirs:

Yet persons with no first-hand knowledge, accepting baseless and inconsistent stories on hearsay, have written garbled accounts of it; while those of eyewitnesses have been falsified either to flatter the Romans or to vilify the Jews, eulogy or abuse being substituted for factual record. . . .

Yet the writers I have in mind claim to be writing history, though beside getting all their facts wrong they seem to me to miss their target altogether. For they wish to establish the greatness of the Romans while all the time disparaging and deriding the actions of the Jews. But I do not see how men can prove themselves great by overcoming feeble opponents! Again they are not impressed by the length of the war, the vastness of the Roman forces which endured such hardships, and the genius of their commanders, whose strenuous endeavours before Jerusalem will bring them little glory if the difficulties they overcame are belittled.

However it is not my intention to counter the champions of the Romans by exaggerating the heroism of my own countrymen: I will state the facts accurately and impartially.

Josephus is telling readers what they would have expected to hear about other historians of the time, that they wrote flattering propaganda extolling the power and all-round superiority of the Romans while deriding the weakness and ineptness of their enemies, the Jews. Josephus, on the other hand, did point out certain failings of the Roman soldiers and the courage of his own countrymen. His own Judaeans, he writes, gave the Romans their money’s worth in order to win their victory.

The question must be asked, then, why did Titus, according to Josephus, prefer his work rather than one of the many other historians of the day? Why would Titus have ordered more widely disseminated a work that did not ostensibly flatter the Romans or denigrate the Jews?

I think Steve Mason in his study of the Jewish war gives a cogent answer to that question:

Titus was reportedly a man of the arts and letters (Suetonius, Tit. 3.2). Pliny’s dedication of his Natural History declares Titus an excellent judge of literature, with unmatched ability in oratory, letters, and poetic composition.226 Granted Pliny’s hyperbole, such interests might suffice to explain some level of support for his protege turned author Josephus. Titus recognized quality when he saw it, and might have preferred Josephus’ obviously knowledgeable account to the thin agitprop of the Flavianist hacks.227

Second, the obvious independence of Josephus’ War could have been useful. After all, Christians would exploit Josephus’ work precisely because it was so clearly Judaean that it could not be suspected of bias toward them (Chapter 1).

Third, after the war it was in the rulers’ interest to rehabilitate Judaeans, the dominant and traditionally stabilizing ethnos of southern Syria (Chapter 4). Would not such a mature political analysis by one of the region’s prominent aristocrats, written from realist premises, help everyone to settle down? Titus’ endorsement and broader dissemination of Josephus’ War could help to tamp down lingering hostilities and unproductive reprisals as in Alexandria and Antioch (cf. Ant. 12.122-24).

That to me sounds more likely than the Caesar’s Messiah hypothesis. Josephus was as prepared to point out failings of the Roman armies at times as well as the courage of his own people against them.

Note, too, that Josephus speaks of alternative histories abounding in his day. It is difficult to accept the claim made on the Caesar’s Messiah video:

“[Josephus] was employed to write the official history that we have. The other histories from this period have been destroyed ruthlessly by the Romans. Josephus tells us this in very chilling passages how the Romans exerted complete control of the literature of this period. There were alternative histories of the Jewish war written, while the Romans rounded up the writers of those histories and executed them. They rounded up all the copies of those histories and destroyed them. That is to say they ruthlessly wiped out any alternative history, so that the only history we have is written by Josephus.” — Dr Rod Blackhirst, Lecturer in Religious Studies, La Trobe University

That’s not what we read in Josephus or in any other historian of the Flavians. Suetonius did write of the last of the Flavians, Domitian, who had one historian and his slaves executed, but that was because of some personal offence and did not represent a wholesale rounding up of historians and destruction of all their works. All the other histories flattered the Romans.

Domitian put to death Hermogenes of Tarsus because of some allusions in his History, besides crucifying even the slaves who had written it out. (Suetonius, Domitian, 10)

2 thoughts on “Did the Roman Emperors Use Josephus to Help Pacify the Jews?”