Before putting aside for a while Tomas Hägg’s The Art of Biography in Antiquity I must address his chapter on the canonical gospels. It’s most interesting to have a set of non-theological eyes from an outside field (classics) examine their literary art as “ancient biographies” while nonetheless engaging with what biblical scholars have learned.

I have said several times that I have a problem thinking of at least the first written canonical gospel, the Gospel of Mark, as being “about Jesus” as a person, which is to say a “biography of Jesus”. My point is that Mark (as I’ll call the gospel’s author) presents us with a Jesus who is little/no more than a theological mouthpiece and actant, teaching, symbolizing and representing theological principles — a theological cipher — rather than as a “genuine person” of interest as a personality and human character. (I suspect that this symbolic nature of Jesus is the reason he can be embraced by such wildly diverse interest groups, even faiths, throughout history and today.)

“[I]t turns out that there is a great diversity within each of the two groups, the four gospels and the ten ancient biographies; and it is this very diversity … that makes it possible always to find a parallel in one or several of the ten Loves for each feature occurring in one or more of the gospels. What is proven is that the investigated features of the gospels are not unique in ancient biographical literature; but no control group is established to show which features may be regarded as significantly typical of this literature, in contrast to the biographical writings of other times or cultures.” (p. 154)

But as Hägg himself points out, whether or not we define a gospel as a biography really comes down to how we define the term biography.

[M]ost discussions of the generic question are dependent on how one defines ‘biography’. (p. 152)

Works of the type of Burridge and Frickenschmidt are important, not for ‘proving’ that the gospels ‘are’ biographies — that remains a matter of definition, no more and no less — but for studying them as literature in context. (p. 155)

Fair enough. Hägg himself discusses the gospels as ancient biographies. Even so, I find his conclusion striking, and in some ways supportive of my own view: in discussing one scholar’s observation that the Jesus in the Gospel of John may speak about love but actually demonstrates very little of it in his own relationships with those close to him, Hägg writes:

The observation is pertinent, but the apparent coolness may rather be attributed to the ascetic narrative style that dominates all four gospels, as soon as it comes to the description of persons and their character traits, not to speak of their physical appearance, physiognomy as well as facial expressions. That the protagonist himself is no exception in this respect reduces markedly the gospels’ character of biographies, even by ancient standards.105 (p. 185, my bolding in all quotations)

Amen. But what does footnote 105 say?

105 Burridge 2004 passim (seen Index s.v. ‘characterization, methods of’), in his insistence that the gospels are close to Graeco-Roman bioi in all respects, misses the nuances; the gospels are rather extreme in this respect.

One of the chapter’s epigraphs is interesting:

‘Jesus: A Biography’ is always an oxymoron.

Tomas Hägg’s chapter “What were the gospels?” does

not set out to prove anything about their ‘proper’ classification; [his] object is simply to read them as biographies. (p. 155)

to trace the gradual ‘biographizing’ of the Christian message.

I omit in this post Hägg’s discussion of Q and the Gospel of Thomas as examples of the type of sayings “gospel” that many scholars believe preceded our canonical narratives — except to use one example of how Mark wrapped a saying of Jesus into a narrative context:

Mark has added a setting, stage directions, an additional question, and replaced disciples with a more open crowd. The sparse words are thereby given some life, a more visual setting. But Hägg’s comment is pertinent:

Yet there is hardly any real biographic focus: the narrative does not return to Jesus’ mother and brothers, to see how they reacted, or even to mention whether Jesus came out to meet them. Thy are the same shadowy figures here as elsewhere in Mark. . . . The author has obviously not been interested in creating any family atmosphere around his hero. Terms for family relationships are mainly left to metaphorical language, as we saw in 3.34, and the only father mentioned is the heavenly father. (p. 164)

We know how it goes. An episodic account of events sometimes connected by a causal link, sometimes connected thematically, sometimes not connected at all, followed by a dramatic passion narrative. Jesus is given a narrative setting as an authority figure accomplishing his divine mission; the witnesses to the miracles and teachings indicate to the readers how to respond to Jesus. The narrative structure is a common pedagogical technique for maintaining audience interest in the message, not unlike the way Plato has woven narratives around some of the teachings through Socrates, especially his own passion or death scene.

The Gospels of Matthew and Luke

Both Matthew and Luke build on Mark and Hägg goes with the current prevalent thesis that Luke wrote independently of Matthew.

Both of them add detail about Jesus’s background, birth and childhood. At least part of the reason for these additions was surely biographical curiosity: was Jesus’ birth and childhood indicative of what he would become as an adult? what sort of family did he come from? etc.

These questions are basic in Graeco-Roman culture when it comes to describing the life of important figures; in one form or another, they are no doubt common to all cultures that celebrate the memory of their heroes. (p. 166)

I won’t outline the nativity story of Matthew here, assuming it is familiar enough to us all. We can refresh our memories easily enough with a web search of Matthew 1-2. Hagg’s observation and commentary helps us verbalize what we sense as we read chapter 1 and the background to Jesus’ birth:

Family life continues to be described not from the perspective of the hero of the story, but from that of his mother’s husband. Jesus is just referred to as to paidion, the child or infant, and is never the grammatical subject.

We then read chapter 2 and the story of Herod, the slaying of the infants and flight into Egypt and return. The narrative establishes the divine status of Jesus but whenever the narrative returns to the family of Jesus we are always given the perspective of Joseph, his fears, revelations and decisions.

Suddenly, while we are still reading about the family of an infant Jesus, we are whiplashed to read

In those days John the Baptist came preaching in the wilderness of Judea . . .

and are immediately taken to Jesus’ baptism, wilderness temptation and beginning of his adult ministry.

We still know nothing about Jesus as a child. We have no idea how old he is when he began his public career. Matthew has remarkably (for a biographer) covered the earliest years of Jesus

without at any point placing Jesus the child in the centre of his narrative. His perspective has been to underline how Jesus from the start was a fulfilment of old prophecies and divine promises; but the only person in the family into whose mind we are granted insight is Joseph . . .

The author, then, has hardly set out to provide a childhood description of any substance. Nor has he striven for continuity. He has left a large temporal gap in his account between the return from Egypt and the baptism without even trying to smooth it with some transitional phrase. (pp. 167f)

It appears that Matthew had no source material about the early life or birth of Jesus from which to draw. He only “half-heartedly” takes the smallest of steps towards writing a “Life of Jesus”.

Luke develops more material for the birth and childhood of Jesus, but is even more idiosyncratic than Matthew in how he introduces it. Luke may tell readers from the outset how he is setting out to write his gospel but he does not tell us that it is about Jesus at all.

We read through his prologue, then we read unfolding details about an elderly priest Zechariah, and his wife Elizabeth, and a visiting angel, . . .

but the uninitiated reader would go on for some time thinking that the child of Zechariah and Elizabeth, so elaborately announced, is the biographical subject. (p. 168)

An “intimate family atmosphere” finally appears in Luke’s story of the happy meeting between the two mothers, Elizabeth and Mary. This is the first time we encounter anything so personal in the gospels; Matthew failed to develop anything similar; and we see here the inspiration for subsequent infancy gospels in the apocryphal traditions.

Luke develops the narrative more fully with graphic details about the actual birth of Jesus, as when Mary “wraps Jesus in bands of cloth and laid him in a manger”. He also points to the universal significance of the event by relating it to a census ordered by the Roman emperor and an angelic announcement to shepherds in a field who soon spread the message far and wide.

But the colour fades with the next two scenes matter-of-factly stating that Jesus was circumcised and named (contrast the elaborate detail of the naming of John) and then presented at the Temple. 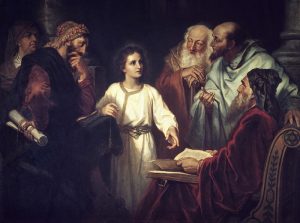 The first genuinely biographical detail of Jesus arrives when Jesus is twelve years old facing the wise men in the Temple. We learn about the parents’ very natural and everyday concerns and the “adolescent arrogance” of Jesus, his separation from this world, his first signs of superior wisdom, and his return to “the expected filial obedience”.

This is the kind of characterizing anecdote that every biographer wishes for, a child demonstrating extraordinary gifts and a behaviour that anticipates his grown-up persona. It is, however, the only one told about the young Jesus in the canonical gospels. (p. 171)

It’s not much, only two childhood episodes to occupy thirty years. But that’s the start.

Hägg turns to examine how two “apocryphal” gospels picked up on Luke’s beginning. . . .

4 thoughts on “Evolution of the Gospels as Biographies, 1”