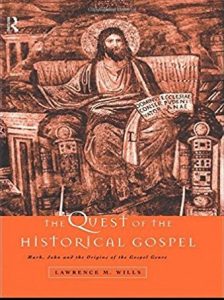 If we are doing comparisons one question that will interest many of us will be just how historical the respective narratives are. I won’t attempt to discuss that question in relation to the gospels and Jesus in this post for obvious reasons, so let’s look at Aesop. Wills is looking at origins of gospel genre but Tomas Hägg gives us a more comprehensive survey of Life as an ancient biography so from this point on I rely upon Hägg. END_OF_DOCUMENT_TOKEN_TO_BE_REPLACED

Especially since reading Theodore J. Weeden’s Mark — Traditions in Conflict, and several other works influenced by Weeden’s thesis, I have tended to assume that the Gospel of Mark seeks to denigrate Peter and the Twelve. They are nothing but failures, “obtuse and wrongheaded” (John Drury’s phrase) in every way. Was the author of the gospel (let’s call him Mark) firing shrapnel at Peter and his associates as part of some sort of ideological battle involving Paul?

But if Mark wanted to condemn Peter then why is it so easy to read the gospel and feel sympathetic towards him? Are we really unconsciously reading Mark through the later evangelists?

Before continuing, I must admit that I am conscious of the fact that I am relying entirely upon the Gospel of Mark as we have it in its canonical form and that the original composition may well have contained significant differences. Be that as it may, to continue…..

Finn Damgaard raised and answered my question in “Persecution and Denial – Paradigmatic Apostolic Portrayals in Paul and Mark”, a chapter at the end of Mark and Paul, Comparative Essays Part II. For and Against Pauline Influence on Mark (2014).

Mark singles out Peter for special mention throughout his gospel so we naturally take a particular interest in him:

Peter’s failings are certainly many:

But notice how the author also leads us to sympathize with Peter. Peter may be a foil to Jesus but he is not portrayed as wicked. Mark keeps the readers on Peter’s side by letting the readers see into Peter’s well-meaning nature, his good intentions and genuine bafflement and tearful remorse over his most serious failures. END_OF_DOCUMENT_TOKEN_TO_BE_REPLACED