Jerry Coyne and Mano Singham have each posted their respective conundrums about Nazis and modern day antisemitism.

But the anti-Jewish racism of Nazi Germany had a plausible explanation. Demagogues always face a particular problem. Part of their appeal is to pander to their followers by telling them how great their race is. This message resonates especially when they are not doing so well, as was the case in pre-war Germany. But then you have the problem of explaining why, if they are so great, their country and their lives are not wonderful. . . .

Mano points out that the Jews in the US do not single themselves out as obviously different by living in ghettos; to most of us they are essentially indistinguishable from anyone.

So back to my question: Why do the current neo-Nazis hate Jews? I am genuinely baffled.

Mano’s blog post prompted me to pick up from my “waiting-to-be-read” pile of books Jacob Katz’s From Prejudice to Destruction: Anti-Semitism, 1700-1933. It had been some time since I read other answers to Mano’s question, such as Yuri Slezkine’s The Jewish Century and Israel Shahak’s s Jewish History, Jewish Religion, (see my 2011 post, Understanding the Reasons for Anti-Semitism) hence I had an added incentive to make Katz my next read.

Mano’s quandary arises from what I think is confusion between a moment of political exploitation of antisemitism and the reasons for antisemitism itself. Antisemitism has long lurked independently of persons in power who have taken opportunities to exploit and fan it.

That was part of my point in my previous post, Islamophobia Really Is a Twin of Anti-Semitism.

Hard on on heels of Mano Singham’s public query, Jerry Coyne posted his own somewhat perverse confusion in A thought about “Nazis”. I posted a short reply on Mano’s blog but Jerry seems to have a habit of banning from his blog views that dissent from his and he has certainly banned me from posting on WEIT (Why Evolution Is True) — though ironically he deplores the “deplatforming of Richard Dawkins by a Berkeley radio station as “a terrible blow to free speech” — so I cannot offer my response to Coyne personally.

Coyne has a conundrum that he posts in A thought about “Nazis” . . . . END_OF_DOCUMENT_TOKEN_TO_BE_REPLACED 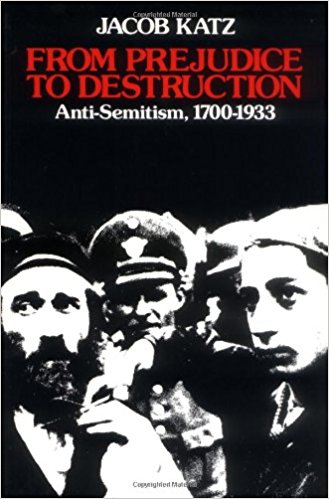 In his opening chapter of From Prejudice to Destruction: Anti-Semitism, 1700-1933 Jacob Katz introduces readers to Johann Andreas Eisenmenger, a late seventeenth century intellectual whom he identifies as setting out the blueprint for the survival of antisemitism beyond the Christian era of the Middle Ages. Katz points out that, ironically, just as the European world was beginning to slough off the domination of Church, superstitions and ignorant prejudices and to move at last in the direction of rationalism and secularism, to a time when states were beginning to grant citizenship and basic rights to Jews, antisemitic attitudes among both elites and the public appeared to take a vicious turn for the worse.

The explanation, Katz believes, must include a focus on historical heritage:

A heavy hereditary burden, going back to the Middle Ages and ancient times, has loomed over the relationship between the Jew and the non-Jewish world. This heritage was partly accountable for the enmity that broke out just when one might have expected it to have been eradicated by the change in historic circumstances. . . . .

Fate decreed that a certain Christian writer, Johann Andreas Eisenmenger, should have arisen at just that moment in the history of anti-Semitism and concentrated the tradition of medieval anti- Jewish doctrines in his great work Entdecktes Judenthum. (Katz 1980, p.13 – The title Entdecktes Judenthum translates as “Judaism Uncovered”.)

One would expect the Age of Reason and the ensuing Age of Enlightenment would rid the world of the scourge of racism.

However, rationalism did not bridge the schism, but succeeded only in changing its character, and so the denunciations of Eisenmenger did not drop out of sight for more than a brief period. They kept coming up, and his book nourished the anti-Semitic movement directly and indirectly at all stages of its development. . .  (p. 14, bolding mine in all quotations) 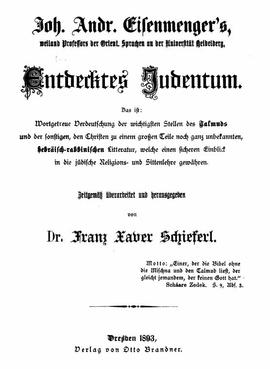 My interest in reading Katz was to further understand the history and nature of modern antisemitism but his discussion of Eisenmenger’s book pulled me right back to so many anti-Islamic writings I have across on the web. The approach, the method and assumptions with which Eisenmenger “identified” the reasons for the “untrustworthy” and even “murderous” nature of the Jews were exactly the same as the way many fearful people today find reasons to fear Muslims as “untrustworthy” and even “murderous” at heart by studying their religious writings. END_OF_DOCUMENT_TOKEN_TO_BE_REPLACED