I have a copy of Norelli’s Ascension d’Isaïe and I consulted it when I wrote parts 7 through 9 of my blog series on a Simonian origin for Christianity. In part 7 of the series I noted in passing that Norelli put the date of composition for the Vision of Isaiah at the end of the first century. And in post 8, as part of my Jan. 30, 2014 response to George Hall, I quoted from page 52-53 of Norelli’s book.

However, just judging from this one book of Norelli’s, I’m skeptical that his work will prove to be, as Bauckham says, “definitive.” And I don’t see that Bauckham himself really considers it all that definitive either for, as I recall, Bauckham argues that Norelli is wrong about assigning a different author to each of the two parts of the Asc. Isa. and about Norelli’s dating of the second part (theVision of Isaiah) earlier than the first (chapters 1-5).

In regard to the Asc. Isa.’s chapter 11 “pocket gospel:” I explain in post 8 my reasons for questioning whether it was part of the original Vision. As you know, I share Carrier’s and Doherty’s suspicions that it was not, but we have different guesses about what was originally there. I proposed that some kind of early passion narrative like the one now found in gMark would fit in better with the rest of the Vision.

Continuing from A New (Completely Revised) Look at the Ascension of Isaiah . . .

Roger Parvus has thankfully reminded me that he addressed aspects of Enrico Norelli’s book on the Ascension of Isaiah in his earlier posts. See his comment on my previous post (in side-box) for links to these and for his more general response to Norelli’s work.

This post overviews the contents of the Asc. Isa., a little of how we came to possess it, and what I understand to be Norelli’s argument for a fresh approach to the study of the text.

The Asc. Isa. was most likely originally composed as a Greek text but its most complete version today is in the Ge’ez or classical Ethiopic script. This has come down to us as part of the Ethiopian Old Testament that has preserved a number of books rejected from the canons of Jews and Christians (such as Enoch and Jubilees).

In its present form the Asc. Isa. consists of two parts.

The first part (chapters 1-5) borrowed the Jewish tradition of the death of Isaiah who was sawn in two by King Manasseh.

King Hezekiah, the father of Manasseh, summoned his son to hear Isaiah recount his vision — the one that we will read about in part 2. But Isaiah informed Hezekiah privately that Manasseh would lead Israel astray from the true faith and that he would kill the prophet.

After Manasseh became king he was influenced by the false Samaritan prophet Belchira to capture Isaiah and saw him in half. We also learn that the real power behind these two men inspiring them to murder Isaiah was the devil, named Beliar.

Beliar was incensed against Isaiah because the prophet had exposed the his scheme to deceive and be worshiped by humanity.

Isaiah’s vision that had so enraged the devil is summed up in between the arrest of Isaiah and his martyrdom. In this section we read additional material that is not found in the later account of the vision (3:13-4:18):

The second part (chapters 6 to 11, except for 11:41-43) brings us to the vision so often referred to in the first half. This vision, therefore, is a flashback to the twentieth year of Hezekiah’s reign and the vision of Isaiah that angered the devil.

Chapter 6 begins with Isaiah leading the prophets in worship in the king’s house in Jerusalem. Isaiah falls into a trance and is transported in vision through the seven heavens up to the presence of God (7:2-9:26). There he witnesses heavenly worship in progress, this one led by Christ (who had not yet visited earth) and the Holy Spirit (9:27-10:6).

Isaiah is then shown God’s plan of salvation:

Isaiah is then sent back to earth by the Holy Spirit, tells his vision to a small circle of the king and the prophets and commands them to keep it secret until the coming of Christ (11:34-40).

The first manuscript of the Asc. Isa. that came to the attention of a modern Westerner was purchased by the English scholar Richard Laurence from a dealer near London. He published it in 1819.

Two other important editions have since appeared:

Dillmann and Charles used the following sources for their versions of the Asc. Isa.:

Norelli acknowledges the translation work Eugene Tisserant (published in Paris in 1909) which is the most cited version, and refers to the new critical edition of all known texts with translation and commentary to appear in the Corpus Christianorum Series Apocryphorum. Handwritten editions of the Ethiopic text and the Old Slavonic will also be significantly increased in this series.

The book that I’m reading (Ascension du prophète Isaïe, a summary of Norelli’s work)  relies for most part on the Ge’ez (classical Ethiopic) version.

The Question of Its Composition

Norelli next discusses how the text has been composed. He points out that the analysis that has dominated up to the present is that of R. H. Charles who set out his views in his 1900 edition. Charles saw the Asc. Isa. as a merger of three originally autonomous works:

A Christian editor was believed to have combined these three writings into our present Asc. Isa..

Norelli argues that most scholars since Charles have failed to investigate the intentions that guided this final editor responsible for stitching these pieces together.

As a result we have piecemeal interpretations of subsections of the Asc. Isa.. The section from 3:13 to 4:18 has generally been taken as a Christian insertion into a Jewish writing. This section was originally composed to encourage Christians facing Roman persecution.

That chapters 1-5 originated as an early Jewish narrative has been the virtual consensus. There has even been a proposal that it was produced by the Qumran community and that the persecution theme was inspired by the treatment of that community’s Teacher of Righteousness.

Norelli tells us that today historians are much more attentive to the context in which texts are produced and to understanding the needs that generate them. R.G. Hall and A. Acerbi are two scholars who have more recently attempted to reconstruct the environment and situation that led to the Asc. Isa. With different nuances they each situate the Asc. Isa. in a prophecy-focussed form of early Christianity. This view had been proposed before but Norelli believes that the methods of analysis applied by these two scholars are lacking. He cannot accept their views of the structure of the text and its purposes. (He cites Studi in margine all’Ascensione di Isaia, Genova 1993, pp. 50-59, for a summary of their views along with his and his colleagues’ critical remarks.) 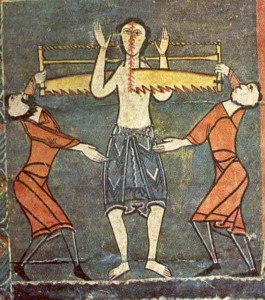 Norelli finds a humorous remark by an English scholar aptly sums up this scholarship: scholars trying to dissect the Asc. Isa. seem to be possessed by that same power of Beliar who sawed the unfortunate prophet in half. Such dissection is not forbidden in principle, but it does not really explain what the Ascension of Isaiah is about, says Norelli.

According to Norelli the problems of interpretation and scholarly approaches can partly be explained by their apocryphal status. Since studies began on the apocryphal literature in the eighteenth century scholars have tended to consider them as secondary texts in comparison with the canonical literature, marginal compared to the patristic tradition, inspired by fantasy and the desire to teach or entertain.

In recent decades this view has been changing: it is becoming increasingly clear that behind these texts we find not only authors concerned with producing literature, but also Christian communities and theological trends which differ from those of the New Testament and the Patristic texts. We see more and more clearly that the term of “apocryphal” applied to these writings served to marginalize them and exclude the groups responsible for them from the main Church. This means that today the study of an apocryphal text cannot avoid the question of its roots in the history of early Christianity, and that has relevance for the question of its structure and composition.

Norelli steps back to address the theoretical underpinnings of what we need to understand. A text is the linguistic part of a communication event, which takes place between a transmitter and a receiver in a given situation. The transmitter is communicating with a particular purpose in mind. This transmitter comes equipped with a wealth of knowledge, beliefs, traditions, expectations that he shares with his receivers. He chooses themes, organizes them, puts them in perspective, and creates expectations that he modifies or contradicts afterwards. In short, he implements a stylistic strategy in order to lead his target audience into his own world. The meaning of a text is therefore conveyed through a stylistic strategy; understanding a text requires a competence in understanding the way such a strategy from a particular heritage works.

These considerations need to be part of the historian’s study. To situate a text historically, it is not enough to point to a few references or details in it; one must try to grasp the overall strategy and understand the situation to which it was responding.

In the case of the Asc. Isa. Ascension the methodological problem is difficult. If we start from the currently prevailing literary analysis of Charles we move into the consensus which actually prevents us from grasping the overall meaning of the text, or at least the meanings of its parts if we conclude that it is a patchwork of disparate sources.

Conversely, if we impose an artificial synthesis to try to describe the themes of the book as a whole then we risk losing sight of the differences and the eventual divisions that could inform us about the history of the composition of the text.

So Norelli tells us that he will therefore study the Asc. Isa.‘s form and content in order to establish if it must be regarded as having been composed as a single book or whether we must understand it as coming about through several phases of composition.

This sounds to me very cogent theoretically but a question in the back of my mind is wanting to be heard: How can we be sure our final interpretation of the text is not the result of circular reasoning?

I suspect I’ll never get a chance to read the new commentary (presumably in Italian) or the 600 page additional volume of explanatory essays by Norelli in order to answer that question for myself.

Further, it’s no doubt a step in the right direction to lift works such as the Asc. Isa. from their prejudicial “apocryphal” status, but aren’t the scholars dedicated to its study still all from the same ideological cloth with evident presuppositions and assumptions concerning Christian origins that that entails?

I look forward to learning more about the different perspectives and future discussions that will surely follow.

Till the next installment in this series . . .

15 thoughts on “Ascension of Isaiah: Contents, Manuscripts and the Question of its Composition”