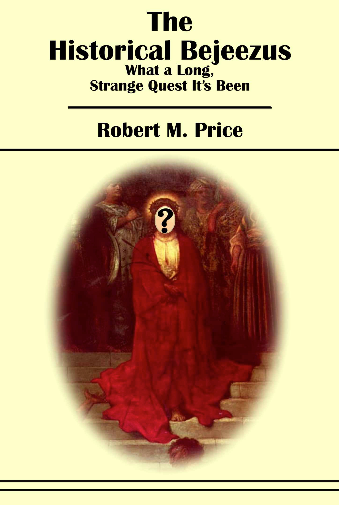 In my previous post I made the following note:

Daniel Gullotta has a more conventional background and approach and recently reviewed Robert Price’s latest volume, Review: The Historical Bejeezus: What a Long, Strange Quest It’s Been. He gives 2 out of 5 stars.

Daniel Gullotta expresses his disappointment over Price giving as much space as he does to some of the more bizarre (and generally obscured from the wider public’s consciousness) Christ myth theories extant today:

Some of these people [reviewed by Price] are household names to Bible geeks, such as John Dominic Crossan, Luke Timothy Johnson, and James D. Tabor, but others are for more obscure and less known. This is where the main problem lies with The Historical Bejeezus.

Some of the writers and theories that Price tackles are simply so minor, so fringe, and so insignificant it is hard to imagine why Price wasted his time and energy writing on them. Some of the chapters that were extremely difficult to finish were the ones related to the works of Hugh J. Schonfield, Joseph Atwill, and Charlotte Allen. . . .

[D]espite the outlandish claims of Atwill’s conspiracy theory about the origins of Christianity and Price’s own criticisms of Atwill’s work, Price nonetheless calls Atwill “an innovative thinker” and says that Atwill’s theory “does not sound unreasonable on the face of it.”

Even Richard Carrier is willing to distant himself from figures like Atwill and Murdoch with far more hard hitting reviews and criticisms, despite their shared overall thesis.

I think I can understand where both Gullotta and Carrier are coming from but I also think it is worth taking note of Price’s own explanation for why he “wasted his time” with such “fringe” authors. From Price’s Introduction:

I take quite seriously even works considered eccentric by the (often dull) mainstream of conventional scholarship. It is only by taking such books seriously, rather than offering facile mockery and disdain, that one can tell the difference between nonsense and brilliant new theories. But I have no wish to defend nonsense, and my book’s title pretty well indicates that I find a good bit of it in several of the books I review. And, again, it is my job to show why they are nonsense if indeed they are. . . . (My bolding) END_OF_DOCUMENT_TOKEN_TO_BE_REPLACED

Time to catch up here with blog posts that have appeared in recent weeks addressing mythicism.

There’s now a blog devoted to mythicism: The Mythicism Files. A good many of its articles look like good future reference material. I was worried at first by the the apparently large space that appeared to be devoted to Acharya S (D. Murdock) but relieved to see Quixie’s very fair discussion of her contribution and criticisms it faces. The Otagosh blog addresses questions a number of us will have about the anonymity of the blog’s provenance. If Quixie is a regular contributor, however, that’s certainly a positive attribute. I’ve seen him write good stuff around various discussion groups and blogs (and in comments on Vridar iirc).

Speaking of Otagosh, he also tells us about the current leader of my old cult wading into the mythicist debate. Predictably a pabulum effort from the great apostle or whatever he’s called now.

Peter Kirby has endeavoured to bring some serious balance into the discussion by posting a detailed case, or rather “best case”, for the historicity of Jesus that he thinks can be made. The Best Case for Jesus. This is good to see. So few anti-mythicists [not that Peter himself falls into that “anti” camp — see his comment below] appear willing or able to argue their case with any real awareness of what mythicists actually say. They also seem to fall back on ad hoc responses too often. Comments are welcome in Peter’s blog, of course, but there is also a discussion on the same at the Biblical Criticism & History Forum.  END_OF_DOCUMENT_TOKEN_TO_BE_REPLACED

If you are frustrated by Bart Ehrman hiding behind a paywall the views of the only expert in papyrology he has found to comment on the current Gospel of Mark fragment controversy behind his blog’s paywall (An Expert Talks About Mummy Masks and Papyri) I suggest we turn to that expert’s own updated blog page:

Mummy masks, papyri and the Gospel of Mark

I am not sure now but I think this page was linked from one of the sites I posted here a few days ago.