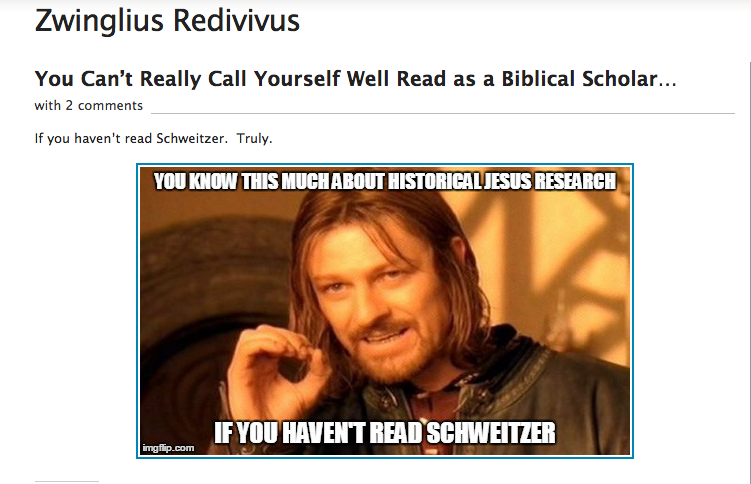 an academic institution designed to train believers for more effective ministry, both in and out of the church. QHST affirms that each believer is a priest before God, indwelt by the Holy Spirit, not needing any human intermediary to reach God and competent to judge spiritual matters for him or herself. Quartz Hill School of Theology is a ministry of Quartz Hill Community Church, a very small Baptist congregation which is associated with the Southern Baptist Convention.

But has Jim himself really read Schweitzer? Although very much a believer in the historicity of Jesus Schweitzer wrote some interesting words about the implications of mythicism and historical methods that I suspect Jim would not like one bit. Jim certainly does not believe in emulating Schweitzer in this area.

Perhaps he has only read the first edition, from 1910, of Schweitzer’s The Quest of the Historical Jesus. There we read the famous insight that has been repeated by many a scholar ever since, that in searching for a historical Jesus each scholar has found a Jesus in his own image:

As formerly in Renan the romantic spirit created the personality of Jesus in its own image, so at the present day the Germanic spirit is making a Jesus after its own likeness. (p. 309)

But the historic Jesus and the Germanic spirit cannot be brought together except by an act of historic violence which in the end injures both religion and history. A time will come when our theology, with its pride in its historical character, will get rid of its rationalistic bias. This bias leads it to project back into history what belongs to our own time, the eager struggle of the modern religious spirit with the Spirit of Jesus, and seek in history justification and authority for its beginning. The consequence is that it creates the historical Jesus in its own image, so that it is not the modern spirit influenced by the Spirit of Jesus, but the Jesus of Nazareth constructed by modern historical theology, that is set to work upon our race. (p. 312)

Jim West is a model of faith-based scholarship. I say this because of his ability to recognize the circularity of much that passes for research into the historical Jesus while not allowing such unstable intellectual foundations wobble his insistence that there really was a historical Jesus.

Jim is also a very unpleasant and dishonest character when he broaches the subject of mythicism and here he and Schweitzer stand poles apart.

Perhaps the reason Jim promotes disinformation about mythicist arguments and makes the effort to excise any hint of a reference to a mythicist site (see his response to being informed of inaccuracies in Casey’s book; his editing to remove a reference to a scholar’s comments on Vridar; and his churlish treatment towards one solely on grounds of suspected mythicism) is his deep-down recognition of this methodological vacuity at the heart of his faith-based scholarship.

The tone in which the debate about the existence or non-existence of Jesus has been conducted does little credit to the culture of the twentieth century. (p.394, the 2001 Fortress edition of Quest throughout)