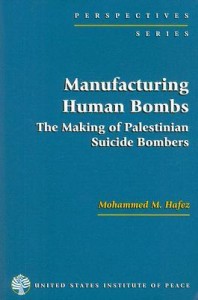 Palestinian suicide bombing operations are now (hopefully) history. The last one was five years ago. It is still good (even if painful) to understand them, however. (I have certainly found much of the reading preparation for this post to be painful; sometimes I could not bring myself to repeat certain details of what I learned.)

Having said that, let me say now that I am vain enough to think that Vridar readers are in some respects like me and share an interest in learning facts about terrorism and suicide bombings (along with any related role of Islam) from investigative journalists and in particular from scholarly researchers who specialize in the relevant fields: anthropology, sociology, political science, Islamist studies among them. To this end my reading list to date consists of Amin Saikal, Ghassan Hage, Jason Burke, Robert Pape, John Esposito, Riaz Hassan, Greg Barton, Scott Atran, Mohammed Hafez, Zaki Chehab, Lily Zubaidah Rahim, Amin Saikal, Tariq Ali and Tom Holland.

I am interested in studying the data these researchers gather in support of their conclusions. That’s what these posts have been attempting to do ever since November 2006: to present some sound and verifiable research data and tried and tested explanatory models of human behaviour to counter the pop polemics from public figures (think Sam Harris, Richard Dawkins, Jerry Coyne) who clearly have no more specialist understanding or knowledge of this area than a twelve year old madrassah pupil has about evolutionary biology or neurology.

It is also disturbing to learn through some of the rhetoric of critics of these posts (and the writings of Harris, Dawkins and Coyne) how very little they know about the “facts on the ground” and the history of the Middle East. I am dismayed that one such figure, Sam Harris, even publicly ridicules and blatantly misrepresents the findings of one of the most prominent and politically influential anthropologists who has risked his life to learn first-hand, in field research, how terrorists think.

In what other area would a public intellectual think to ridicule his intellectual peers while at the same time promoting the popular prejudices and CNN sound-bytes and Fox News stories as reliable and responsible datasets and founts of wisdom?

So far I have posted thoughts and research from publications by

And yes, I’ve also read Sam Harris (two books), Chris Hitchens (four books), Richard Dawkins (six or seven books plus interviews), Daniel Dennett (one book) and even Jerry Coyne (one book and lots of blog posts) and what they have had to pontificate against their perceptions of Islam.

For the benefit of newer readers who have been upset by my posts on this theme, note that these posts began in the first month of the creation of this blog. This is not some new-found interest of mine. The by-line of this blog from the beginning has been, Musings on biblical studies, politics, religion, ethics, human nature, tidbits from science. Only this year have some readers seen fit to complain that they do not think that these posts meet Vridar standards of presenting reliable scholarly research and sound argument.

I have since had an opportunity to read two more books by Mohammed Hafez: one exploring the phenomenon of suicide attacks in Iraq (up to 2006) and the other Palestinian suicide bombers from 1993 to 2005.

I was prompted to obtain a copy of Hafez’s study of the terrorist attacks in Iraq after hearing of yet one more horrific spate of bombings that once again killed dozens of Iraqis. (Why are they targeting fellow Muslims? Especially now that the U.S. has left? It turns out that there is a strong motivation among a good number of people to maintain Iraq as a failed state.)

This post primarily addresses Hafez’s findings about the motives of individual Palestinian suicide bombers. I conclude with a few related explanations from Scott Atran. (Sorry, that was my intention when I began this post, but the post turned out way much longer than I anticipated. More on Scott Atran’s views later.)

A popular Western view is that the Muslim world has a fatal enchantment with martyrdom. Religious fanaticism is one of the most common explanations of why individuals volunteer to become human bombs. (Suicide Bombers in Iraq, p. 218)

In his earlier book, Manufacturing Human Bombs, Hafez singled out several problems with this explanation: END_OF_DOCUMENT_TOKEN_TO_BE_REPLACED