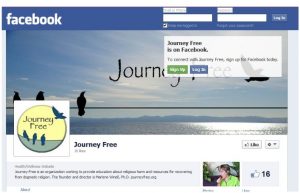 The Journey Free team is a group working to provide education about religious harm and resources for recovering from the effects of dogmatic religious indoctrination. Our office is based in the San Francisco Bay Area where Dr. Marlene Winell, our director, has a consulting practice; most of Journey Free’s recovery retreats are held in this region too.

Dr. Winell wrote the leading self-help book on recovering from religious harm after working in and researching the topic for more then 20 years. In 2011, she named Religious Trauma Syndrome or RTS a form of chronic Post Traumatic Stress Disorder or “C-PTSD.” END_OF_DOCUMENT_TOKEN_TO_BE_REPLACED 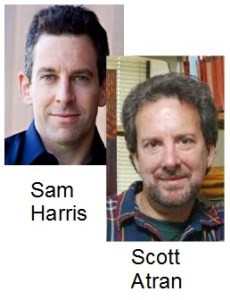 Sam Harris in The End of Faith and Letter to a Christian Nation has written a lot of uninformed nonsense about religion in general and Islam in particular. Don’t misunderstand. His logical arguments against religious belief systems are entirely valid. For a time when I was in the process of recovering from my own religious experiences I would have endorsed almost everything he wrote. Even mainstream Anglican pabulum was a threat to humanity because it lent social respectability to religious faith and the Bible, and that made it possible for extremist cults — who also claimed faith and the Bible as the foundations of their seriously harmful systems — to germinate. (I was focusing on the intellectual constructs as the easy and obvious target, failing to realize that there was something far more significant at the root of religion.)

At the same time I was going through that phase I could not help but notice a niggling doubt in the back of my mind. Yes, my argument was entirely rational, and borne of experience. But was it the whole story? If there had been no notion of faith or the Bible in any religion, would that really mean we would be living in a Utopia? Was it really only social respectability for faith and the Bible that cults fanned into something monstrous? Was there not also a shared dream of a better world? Should such idealism also be condemned? Was there not also a shared belief in the rightness of doing good? Even the dreams and the morality of the cult could be turned into destructive weapons. But they could also be used for much good, too.

Cults may sprout out from mainstream religions but it does not follow that they are the cause or to blame for them. A host to a parasite is hardly to be blamed for the parasite.

Religion is not going to disappear, or if we believe otherwise, it certainly won’t be demolished by rational answers to its teachings of faith and belief systems. I guess that thought was beginning to dawn on me when I started this blog and that’s why I’ve never been interested in any sort of “anti-Christian” or “anti-religion” crusade of any sort. People will respond to precision arguments and new questions when they are ready. Crusading against irrational beliefs — or against even rational ones based on false data — will rarely accomplish much more among the believers than to send them scrambling for better reasons for holding fast to those beliefs.

That is, polemics like those of Sam Harris are based on a misunderstanding of the very nature of religion and may in fact be backfiring and strengthening religion’s power in the world. It’s only in recent times that I’ve begun to truly grasp this.

So it was with some relief that I read a fact by fact rebuttal of Sam Harris’s diatribes against all religions and Islam in particular. The following (as well as the title of this blog post) is based on a section of Talking to the Enemy: Violent Extremism, Sacred Values, and What it Means to be Human by Scott Atran.