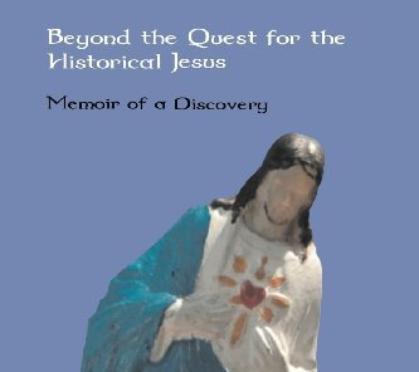 Dominican priest Thomas Brodie has written an autobiographical narrative of how he came to the realization that the New Testament writings about Jesus, in particular the Gospels, do not derive from reports about the life and teachings of an historical person at all but are entirely sourced and re-created from other theological writings. The Jesus of the Gospel narratives was created as a kind of parable or theological symbol.

His book, Beyond the Quest for the Historical Jesus: Memoir of a Discovery, is a recounting of how his ideas developed and also of the lessons he learned along the way as he attempted to share and subject his research to independent scholarly criticism.

More, it is also a survey of the history of scholarly interpretations of the Bible, sweeping the reader through a panoramic view of how we got to where we are today with how we critically read the Bible.

Anyone not aware of Brodie’s background can learn a little more from my earlier posts in relation to Beyond the Quest. (Check the Index of Topics drop-down list in the right margin to see posts on other works by Brodie.)

Beyond the Quest is divided into five parts. Below are the intellectual themes of each part. These are narrated within the context of Brodie’s own life-experiences, exchanges with other (sometimes highly prominent) scholars, personal aspirations and challenges. He also reveals the background to each of his major publications.

The book concludes with an epilogue reviewing Bart Ehrman’s Did Jesus Exist?

In this post, Act 1, Scene 1, I’ll highlight the principle intellectual discoveries in Brodie’s early career as a student. These in themselves are well-known today among most readers with a critical interest in the Bible. They do not themselves directly lead to Brodie’s mythicist views. But we need to start at the beginning. There is much of Brodie’s own personal experiences that form the background to his education, and I encourage anyone interested to read his book to appreciate a little the personal odyssey this proved to be for Brodie. There is much of human interest as he relates his intellectual journey to his personal and wider social experiences.

And more than that, the reader will likewise begin to share Brodie’s learning and understanding of the sweep of critical biblical studies since the eighteenth century and even earlier.

At one moment in his high school years Brodie was struck by the “extraordinary experience of depth and calm and truth” in Jesus’ farewell speech in the Gospel of John. He went on to learn by heart that entire Gospel.

One day an older Dominican remarked casually that the words of Jesus in the Gospels were not necessarily the exact words Jesus spoke. Brodie describes the slightly disheartening feeling that probably many other young believers have felt on first learning this.

But that is the sort of stuff most of us go through in our teen years. We learn to understand more the ways of the world, accept reality, and move on with faith unshaken or even cemented.

Then in the 1960s Brodie was taught in the tradition of Jerusalem’s Dominican-run biblical school, Ecole Biblique, a school that emphasized history and archaeology. Here is where Brodie was introduced to the historical-critical method.

The process is like that of a wise court-room where the facts of a case are in doubt, or of a calm history department in a university. The various biblical accounts of an event or life are examined individually, compared with one another, and compared also with other accounts or with other pertinent evidence. (p. 4)

Example. The Book of Jonah. END_OF_DOCUMENT_TOKEN_TO_BE_REPLACED

In the past I have posted on biblical scholars I have caught out promoting and citing Wikipedia articles, books, journal articles, archaeological finds in support of their views that in fact directly contradicted their arguments and claims. Mercifully the names of these scholars have been relatively few. I have posted far more on many excellent biblical scholars who produce informative and interesting work.

But there is one more published biblical scholar who has come to my attention as another charlatan. I would hope that this post will embarrass him enough to pull him up and lead him to mend his ways. I really would much rather argue with a competent and honest scholar than an incompetent charlatan.

Recently Joel Watts referred to “the science of history” in a blog article. My blogging colleague queried the meaning of that phrase, and someone tweeted Joel to protest, so Joel Watts has come back like a steam-roller to squash any suggestion that history is not a science.

Normally this sort of ignorance can be overlooked. But Watts is a PhD student and a published scholar so he has attained the status of being a “public intellectual”. As a public intellectual he deserves to be held accountable for what he publicly writes.

Joel Watts has no specialty in historical studies that I am aware of. I suspect few New Testament scholars have any idea of landmark names in the history and philosophy of historiography like von Ranke, Collingwood, Carr, Elton, White or the various schools of history. Yet he is quite prepared to publish on something he knows nothing about and insult others who do know what they are talking about.

Joel, if there’s one lesson I’d like you to take from this post, it is this: Don’t treat your reading public as fools. They really are smarter than you think. You even explicitly call us stupid, imbeciles, etc. yet you produce blatant charlatanry like the following.

(I have shortened some of the longer urls)

On the “science of history”

there are times you just can’t help stupidity… mythicism falls into this category, but…

So Bahumuth, one blessed with a special kind of mythicism, tweeted this regarding my use of the phrase “science of history.

The “science of history”? I don’t know about you, but I studied history when I got my M.A., not my B.S.

Guess he does have a special sort of b.s. as well.

Remember, what is here are links with a variety of resources, including some responses against the idea. If you can’t understand the use of a multitude of sources… oh wait… some do not even get the idea of sources.

So what is Joel’s method here? How does he prove his point that history is a science? It appears he Googles the phrase “history is a science” or similar, collects a quick grab-bag of URLs that pop up, and posts them as a “There! Gotcha!” But he can’t help but notice a few at least don’t support the idea, so he mentions that too.

What he doesn’t grasp is that the whole collection is nothing but a testimony to the fact that history is not today considered a science — the main exceptions being some Marxists. The days when many historians thought of it as a science are now over a century gone.

This is the very method that his good friend and Associate Professor at Butler University has been caught out doing repeatedly — and unrepentantly — with Wikipedia articles on historical method and with citations from historians. How is it possible that such “scholars” continue to do this sort of thing? I can only presume they assume everyone else is as lazy and incompetent as they are and no-one will bother to check their citations.

Unfortunately for Joel Watts I have checked every one of those links and not a single one of them demonstrates that history is a science. Many/most (not “some”) of them actually argue the very opposite! Many plead that they would like it to be a science, and most of these are from the nineteenth century or modern Marxists.

Let’s look at each of those sites and ask what we learn about this scholarly fraud in the process: END_OF_DOCUMENT_TOKEN_TO_BE_REPLACED