As signalled in a comment on my recent post on the single authorship of Genesis to 2 Kings, I have decided it best to back-track a little before continuing that series and posting a little on how oral tradition came to be a ruling paradigm among Biblical scholars and why an increasing number of scholars, especially those who study the Gospels, are coming to question whether it has any place at all in the creation of the biblical stories. This post begins to cover Thomas L. Brodie’s chapter, “Oral Tradition: Wonderfully Plausible but Radically Problematic”, in The Birthing of the New Testament: The Intertextual Development of New Testament Writings.

There was a time when the gospels were seen as the product of writing — of competent authors using some ancient form of pen and writing materials. It was presumed that the evangelists [i.e. gospel authors] had either been present at many of the events they described (like Matthew and John) or had received their information from authoritative sources (Mark from Peter, and Luke perhaps partly from Paul.) (p. 51, The Birthing of the New Testament, by Thomas L. Brodie)

Given that the time-gap between the events narrated and the gospels was at most fifty or sixty years, it was understood that eye-witness testimony in some form (oral or written) was available to even the latest of evangelists.

used it as a model and who thus introduced it to the center of biblical studies.

Gunkel went against the perceptions of those who had gone before by failing to see Genesis as artistic literature. Further, Gunkel implied that his model “could be applied to the life of Jesus.” (Brodie, p. 51)

In effect, he gave the twentieth century a new paradigm.

Soon the new idea of “form criticism” began to appear in New Testament studies. Wellhausen went beyond Gunkel’s implication and secured a central role for oral tradition in Jesus studies with his series of commentaries and introductions to the gospels 1905-1911. Bultmann summarized Wellhausen’s contribution:

The oldest tradition consisted almost entirely of small fragments . . . and did not present a continuous story of . . . Jesus. When these fragments were collected they were connected so as to form a continuous narrative. . . [Wellhausen] showed not only that they evangelists’ narratives . . . were secondary, but also that oral tradition was steadily producing more and more new sayings of Jesus. (Bultmann, 1926, quoted on p. 51 Birthing of the New Testament)

K. L. Schmidt introduced the model of the Gospel of Mark that has been widely embraced among scholars up to today and that has been discussed in recent posts reviewing Jesus, Criteria, and the Demise of Authenticity:

In 1919 he used Gunkel’s model to distinguish between Mark’s framework, which Schmidt reckoned came from the evangelist, and Mark’s various units, which Schmidt assigned to oral tradition . . .

And so a new idea of the gospels emerged: they are not really literature, not the work of literary people. At one point Bultmann described the gospels, or at least the Synoptics, as ‘unliterary’. (my emphasis)

Brodie emphasizes that the role allotted to oral tradition to the study of the gospels is largely a twentieth century innovation. I gather from Brodie’s historical outline of the scholarship that this view of the gospels was not the result of literary analysis of the gospels themselves with conclusions seeking an explanation, but it was a view imposed upon the gospels by the model itself.

Contrasting perceptions of the literary qualities of the Biblical literature

Brodie earlier addresses emerging scholarly views arguing for sophisticated literary qualities of the biblical literature. He included a lengthy extract from André Chouraqui (1975) who had spent decades translating the Bible into French. How is it possible that Gunkel and Chouraqui, reading the same literature, could come to such opposing views? Chouraqui:

What were the writing techniques of the inspired authors of Israel? I believe that we have scarcely begun to glimpse them. This art corresponded to a science which was very rigorous, traditional. . . . an art of symphonic composition where each word, each letter, has connections which continue through the entire account; [there is] even a kind of arithmetic of words. It is known in the neighbouring civilizations. . . writing sometimes constituted a veritable cryptogram. . . As far as the Hebrews are concerned, the techniques of expression have not yet been fully deciphered. [The biblical writers] had a writing art to which we do not now have the keys. The structure of the language is extraordinarily wrought, even to the detail of the letters. . . There are internal harmonies between words, even between letters; there are stunning balances (équilibres bouleversants). A biblical text was ‘assembled’ with the same exactitude, the same precision, as is used today in assembling the elements of a computer or a missile.

This brings to mind (though not mentioned by Brodie) M. J. J. Menken’s Numerical Literary Techniques in John: the Fourth Evangelists Use of Numbers and Syllables — indicating that Chouraqui’s observations extend into the New Testament literature as well.

So we have two views of biblical literature that could hardly be any more distant from each other.

All writing to some extent owes something to oral communication.

In this sense all ancient literature is oral, including the Greco-Roman classics and the Bible. (p. 52)

The Aeneid illustrates the place of orality as a medium or means of expression, as opposed to the content of the story being expressed.

Oral Tradition as understood before Gunkel

“Before 1900 there had been two pivotal ideas about oral tradition . . . .” — one belonged to Jewish tradition and the other to anthropological studies:

We can understand the Jews wanting to invest their oral law, and then the Mishnah, with the authority of the myth that it was spoken by God to Moses. But why did Gunkel, when faced with the same text as Chouraqui, start talking about primitive, pre-literate communities?

Gunkel framed the question of the nature of Genesis as a choice between history and saga. Clearly Genesis was not history, he observed, so it must be saga.

Saga is oral tradition. So Genesis is also derived from oral tradition. History is a sophisticated accomplishment of cultured peoples. Sagas are found among uncultured non-literate societies. We can thus imagine the Genesis tales arising from primitive, non-literate peoples.

The Genesis episodes are brief. So we must further picture storytellers meeting the limited mental capacities of his uncultured communities. So Genesis consists of lots of short episodes that had been told in primitive communities and that were stitched together by an editor to create the longer book. 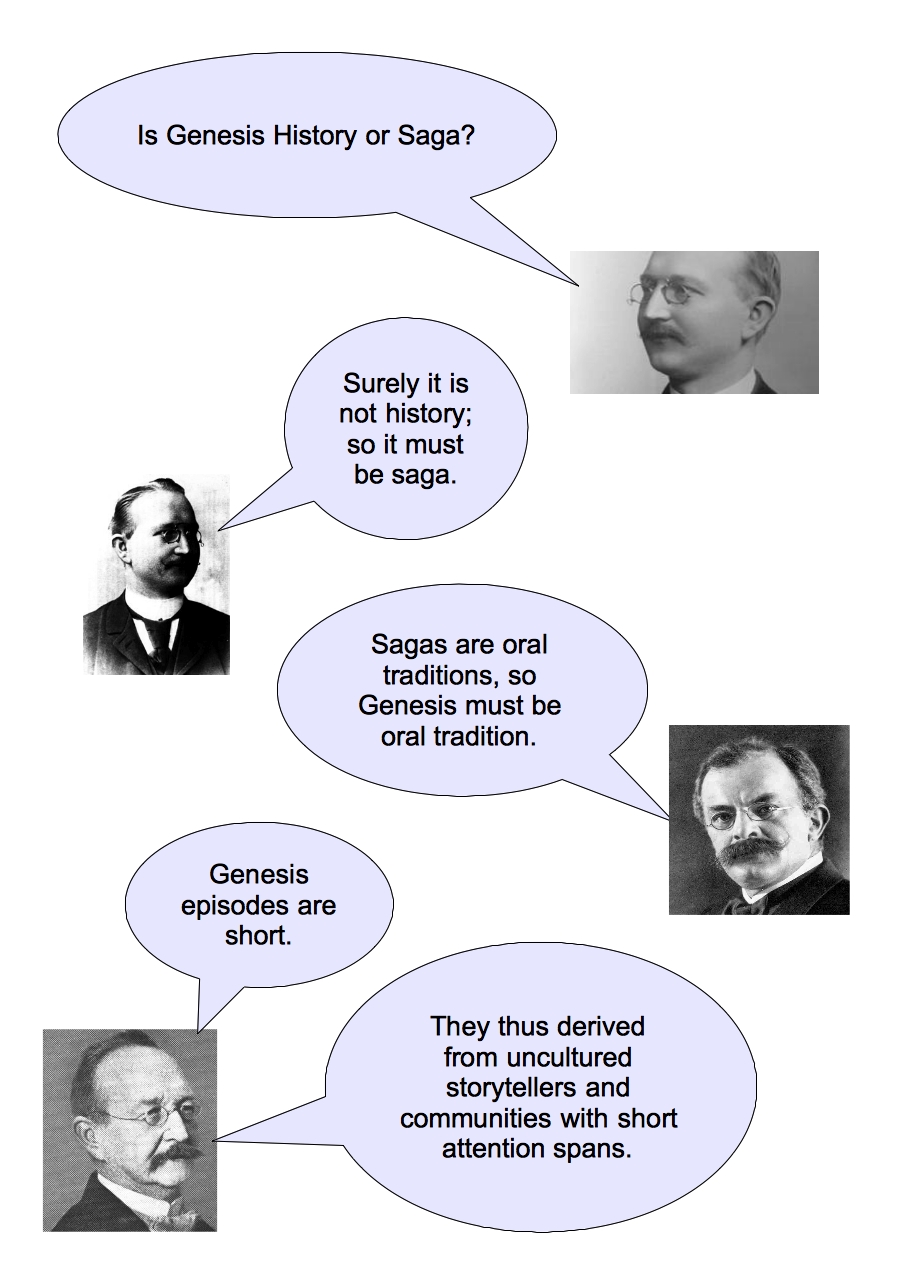 So on page forty of his commentary on Genesis Gunkel began talking about “the foundational role of oral tradition. And behind the oral tradition were, not authors, but communities.” (p. 55)

Gunkel’s Genesis community ‘not only . . . rearrange[s] . . . the material . . . but the reader is constantly aware of the way in which the ‘mature Western European’ presents the naïve attitude of the ‘childish Oriental’ towards nature . . . God, etc.’ (Nielsen 1954:11).

Given such an attitude, it becomes more understandable how, even when faced with a superb writing, magnificently crafted, Gunkel’s imagination jumped to something naïve or simple. (pp. 52, 53, my emphasis and formatting)

At a stroke, biblical writers, as real writers, had been virtually eliminated. Gunkel had created an atmosphere in which it would become easy to accept that Mark was clumsy and that John’s gospel was isolated, confused, and open to rearrangement. (p. 55, The Birthing of the New Testament)

The Book of Genesis is “encyclopedic and antiquarian.” It epitomizes the world’s history and legends, “even back to the days when there were giants on the earth.” Amidst such a mass of data it was “easy to find some data which seemed to correspond in some way to oral literature.”

And given a choice between an historian sitting at his office desk and a storyteller, how could he possibly opt for the former?

Of course we can see today that the choice between history and saga was a false one. Gunkel lacked awareness of the nature of ancient historiography and anachronistically set what moderns understand as history against saga.

The second half of the twentieth century saw the first efforts to recover the concept of authorship of biblical literature.

Many New Testament scholars have now reached the conclusion that the gospels are fine writings. While moving ahead, the paradigm is coming full circle. The idea of ‘genuine literature’ has returned and, as it does, Gunkel’s invoking of ‘oral processes’, unclear from the beginning, now looks even more inappropriate. (p. 55)

On what basis, then, is it possible to go on claiming oral tradition?

The arguments for and against will be the subject of the next post in this series.

17 thoughts on “Oral Tradition Behind Gospels and OT: Unfounded, Unworkable and Unnecessary”