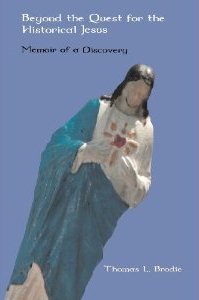 Though several New Testament scholars have attempted to accuse mythicism of being invalid on the grounds that it is supposedly driven by an agenda hostile to religion generally and Christianity in particular, there is abundant evidence to demonstrate that this is an ignorant accusation. If I recall correctly Dr Robert M. Price has made no secret of his affection for religious trappings; René Salm (Myth of Nazareth) has clear sympathies with Buddhism; and Paul-Louis Couchoud, as I quoted in my recent series of posts on his work, expressed the highest admiration for the Christian religion. Now we have Thomas L. Brodie (Beyond the Quest for the Historical Jesus), writing compassionately of belief in God and Jesus as a literary symbol.

Recall from my earlier quotation from Brodie’s Prefatory Introduction, this time with different bolding:

Then later in the same introduction:

To say Jesus did not exist as a historical individual does not mean he has been eliminated. . . . He is not eliminated, but seen in a new way. . . . (After comparing the Copernican revolution that disturbed many people but did not do away with the earth — only leading them to see earth in a different way . . . ) Jesus too loses one aspect of his solidity. But he does not lose his central place. In fact, his central place as ‘an image of the invisible God’ (Col. 1.15) can become clearer than ever. END_OF_DOCUMENT_TOKEN_TO_BE_REPLACED