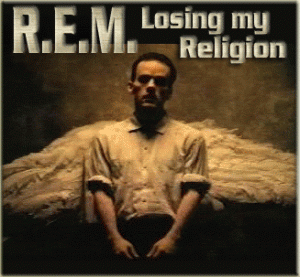 A minister once told me he wished he knew who or what burned me so badly I left Christianity. I didn’t answer. I wasn’t burned. I evolved. — John

Marleine Winell in Leaving the Fold (See earlier Journey Free post) outlines several reasons leave fundamentalist religious systems in particular, but I think some of the points probably work for why people leave behind any religious faith. Her list is not complete or the result of a controlled study, as she herself explains. The purpose of her book is to support readers who have already stepped outside their old religious worlds and to share with them a range of experiences of others who have been through the same journey.

In general, people make changes of all kinds based on integrating information from new experiences. Human beings are “wired” to survive and thrive. Thus when we are disappointed with the methods we are using to meet needs, we are likely after a while to seek new methods. Also, change is more likely to occur if we are frustrated and we have access to information about alternatives. In effect, there are forces that push and forces that pull. Formally religious people find other ways to live, without the intellectual, emotional, and ethical discomforts that had become bothersome. New satisfactions add to the impact of the dissatisfactions, and the combination becomes enough to force the break. Thee multiple influences can be subtle and accumulate without clear awareness. (p. 88)

People are growing, changing, maturing beings. Our development into more complex creatures is most noticeable in infancy, through childhood and youth.

This change is not random, but progressive with increased physical skill, emotional maturity, moral and cognitive development.

Personal development continues through adulthood. We integrate experiences as we change and grow, learn to appreciate paradoxes and shades of grey in our lives, learn how better to deal with situations.

That normal development can, however, be arrested. And that’s what happens when someone is diverted into a fundamentalist, black-and-white, dogmatic belief system.

In cases where a believer puts their trust strongly in a religious leader they make themselves vulnerable to disillusionment, even trauma, when that leader seriously fails.

Leaving such a religion can thus be seen positively as simply resuming one’s personal maturing and evolution.

Sometimes such resumptions of personal development come with a major life transition. Winell cites one woman for whom the birth of a child was such a turning point:

I believed the Bible’s promises and prophecies. I declined my parent’s offer to pay for a college education and devoted my time to studying the Bible and volunteering full-time in the ministry. At the age of 28, as I was expecting my first child, my whole concept of life and of the future collapsed. It was as if I had awoken from a dream state and saw reality for the first time. In the midst of the ensuing confusion I was left with the task normally reserved for adolescents: the search for who I am and what I am to do with my life. The nagging doubts that I had been able to hold at bay for years were finally slipping through. (p. 89)

2. The Bible and Fundamentalist Doctrine END_OF_DOCUMENT_TOKEN_TO_BE_REPLACED