What does the data tell us?

In 2005 Robert Pape (Dying to Win: The Strategic Logic of Suicide Terrorism) published figures that enable us to see whether al-Qaeda terrorists were influenced primarily by their religious beliefs or the foreign occupation forces in their countries.

(I earlier posted other findings of Pape’s identifying terrorist goals and targets: see Terrorist Facts, #2. The figures in this post identify the affiliations and origins of al-Qaeda terrorists.)

“Islamic fundamentalism” — an expression commonly referring to any Muslim movement that seeks to establish an Islamic state — is generally portrayed as “militant”. The fact, however, is that such movements are widely varied (with different movements not accepting each other as true Islamists) and “only a tiny fraction of those who subscribe to these movements have engaged in acts of violence.”

The Muslim world is broadly divided between Sunnis and Shias. The Shias are concentrated mostly in Iran and Iraq and no Al-Qaeda consisted of Muslims (it’s as good as dead now in 2013) who practiced a Sunni form of Islamic fundamentalism known as Salafism.

Apparently oblivious to the varied nature of Salafism (many Salafis oppose and condemn violence) a number of “important scholars and policymakers have . . . come to the conclusion that the ideology of Salafism is a principle cause of al-Qaeda terrorism.” (p. 107)

The following data is based upon the 71 al-Qaeda suicide terrorists who blew themselves up between 1995 and 2003. All but one of 67 whose nationality we know came from a Sunni Muslim country. The exception was from Lebanon and his religion is not known for certain.

An examination of the 66 al-Qaeda suicide terrorists who were known citizens of Sunni-majority countries shows that American military presence is a stronger factor than Salafi fundamentalism in predicting who dies for al-Qaeda’s cause. (p. 109)

However, when we examine the effect of the absolute number of the Salafi-influenced population on the absolute number or terrorists from any country, the effect is not statistically significant . . . . Pakistan produced far fewer terrorists and Saudi Arabia and Morocco far more than would be consistent with a direct relationship between Salafism and suicide terrorism. . .

This means that . . . the odds that someone from a Salafi-influenced country will become an al-Qaeda suicide terrorist are not significantly better than chance. (pp. 110-112)

Contrast the data that relates al-Qaeda suicide terrorists with American combat operations. But first, what is meant by “Occupation”?

How can any fair-minded person think the U.S. is an occupying power? END_OF_DOCUMENT_TOKEN_TO_BE_REPLACED

What were terrorists doing before they discovered the USA, UK, Europe, Bali?

These tables are for a particular type of terrorist attack, the suicide bombing, from 1980 to 2001, from Robert Pape’s article, “The Strategic Logic of Suicide Terrorism”, American Political Science Review, Vol. 97, No. 3, 2003 (pp. 343-361). The same tables no doubt appear in his book Dying to Win but I don’t have my copy of that with me. 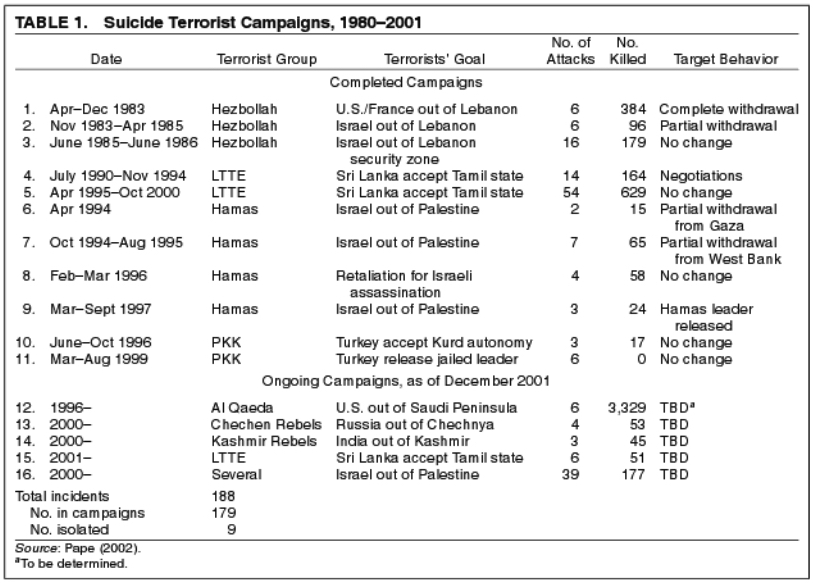 END_OF_DOCUMENT_TOKEN_TO_BE_REPLACED

I would not be surprised if I ever learned that I could do the same with the faiths of Judaism and Islam. END_OF_DOCUMENT_TOKEN_TO_BE_REPLACED

Robert Pape, a professor of political science at the University of Chicago, has analyzed suicide bombings internationally since the 1980s. In Dying to Win he demonstrates that the earliest case of modern suicide terrorism was carried out by mixtures of Islamists, Christians and Socialists without any particular allegiance to religion in Lebanon. In Sri Lanka many were Buddhists. It is not restricted to any particular religion. The cause was in every case political and national. Religion might help some muster a Dutch courage to carry out those missions, but it might just as often restrain many others from surrendering their lives through such an act. Pape’s latest discussion (co-authored) of Chechen suicide bombings in the New York Times adds to this case. An easier-to-read form of this article can be read on InformationClearingHouse.info.

Dr Jim hits the nail on the head whenever he trashes Richard Dawkins’ too-often “pretty pathetic” [Link //drjimsthinkingshop.com/about/ and blog is no longer active… Neil, 23rd Sept, 2015] treatment of religion. I love a lot of how Dawkins handles religion, but as Dr Jim has put it, he can also show himself up as not really understanding “the humanity” (too busy focussed on “the stupidity of it”). Ditto for Sam Harris. Discussed something like this once before.

Simplistic discussions like these do not contribute to the most constructive way to remove this threat.

Yes, I think the founding fathers set up a political structure that’s very stable, that is very wisely designed, so political structure is part of it. They also guaranteed a free press and all the institutions that make it possible for voters to really feel empowered, such as local village councils, which was one of Gandhi’s big ideas. So you know, it’s a very successful democracy. It has higher voter turnouts by far than the US.

But there is a problem. India’s Muslims are not violent enough. They haven’t produced a raft of international terrorists. They just want to live at peace with their Hindu neighbours. They don’t even want to overthrow their nation’s democratic government and institute Sharia law for all. And they are the second largest conglomeration of Muslims after Indonesia. END_OF_DOCUMENT_TOKEN_TO_BE_REPLACED

Yes, I think the founding fathers set up a political structure that’s very stable, that is very wisely designed, so political structure is part of it. They also guaranteed a free press and all the institutions that make it possible for voters to really feel empowered, such as local village councils, which was one of Gandhi’s big ideas. So you know, it’s a very successful democracy. It has higher voter turnouts by far than the US.

But there is a problem. India’s Muslims are not violent enough. They haven’t produced a raft of international terrorists. They just want to live at peace with their Hindu neighbours. They don’t even want to overthrow their nation’s democratic government and institute Sharia law for all. And they are the second largest conglomeration of Muslims after Indonesia. END_OF_DOCUMENT_TOKEN_TO_BE_REPLACED

There is much to commend The God Delusion as a clear presentation of a wide range of reasons for viewing atheism as not only a rational but a wholesome and positive alternative to religion. I will probably address some of these in future posts. (The book is also far by miles from being the rabid polemic against religion that it has been promoted as being in many quarters.)

But there is one area where the book disappointed me — it follows Sam Harris’s End of Faith in simplistically reducing the fundamental cause of Islamic suicide terrorism to the belief that a martyr’s death will translate into heavenly and/or virginal bliss.

At least Dawkins acknowledges that there are other factors pressuring such terrorists to their acts, but he still comes down on this fanciful belief as being the bottom line that enables such actions.

The reason I think it worth addressing this claim is that I believe it has the potential of stoking the flames of intolerance, especially against a large part of non-western humanity, and contributing to western blindness that can only serve to perpetuate the whole problem. END_OF_DOCUMENT_TOKEN_TO_BE_REPLACED