Historian and author of In the Shadow of the Sword: The Birth of Islam and the Rise of the Global Arab Empire, Tom Holland, was interviewed last night on Late Night Live, an Australian “Radio National” program hosted by Phillip Adams.

I’ve posted twice before on Holland’s controversial view that Islam as we recognize it arose after the Arab conquests. Holland does not deny the historicity of Muhammad (though the evidence he cites seems flimsy to me) or that there was a form of “Islam” founded by the Prophet before the Arab conquests. It was only after the Arabs found that the empires of Rome and Persia had fallen so easily into their grasp (having been savagely ravaged by bubonic plague and war) that divine explanations were called for.

The conquered peoples, in particular the massive influx of slaves, fed their own beliefs and interpretations into the “hadiths”, sayings attributed to the Prophet, and — not without Caliphate dictates — forged what has become the Islam we recognize today. The Caliph most responsible, Islam’s equivalent of Saint Paul and Constantine combined according to Holland, was Abdul Malik (see Islam, the Untold Story).

If you haven’t caught up with Holland’s view yet, the interview is worth a listen: The Origins of Islam. END_OF_DOCUMENT_TOKEN_TO_BE_REPLACED

A few weeks ago I posted Islam – the Untold Story as a response to my introduction (through a radio program and an online video) to narrative historian Tom Holland’s controversial book on the rise of the Arab empire and the origins of Islam. I was interested in some of the comments expressing Muslim viewpoints but not having read the book, and not having studied Islamic history in any depth, there was not much I could say in response.

Now I can at least make a few comments on Tom Holland’s approach to the question after having read his 58-page introduction.

(Coincidentally today I heard another radio interview with Tom Holland, one in which he discusses the way he writes history, the modern relevance of his other historical works, Millennium and Rubicon, as well as further comments on In the Shadow of the Sword.)

But first, let me confess my bias: I believe the most reliable way for any historian to work is to begin with data that can be tested for its genre (hence likely authorial intent), its provenance, and the independent verification of its content. As a result I have come to lean towards the views of those scholars who are derisively labelled “minimalists” and who question the authenticity of the Bible’s account of Israel’s origins and the course of its kingdoms of Israel and Judah. I have also been persuaded by the view of at least one of those “minimalists” who — again via the same touchstone questions concerning sources — has come to think the Gospel narratives of Jesus are as fictitious as the Old Testament’s narrative of Israel.

I approach the origins of Islam with the same set of questions about sources.

Tom Holland knows how to surprise a western reader who has been fed a diet of Islamophobia. In the front pages we read words attributed to Mohammad from which the title is drawn:

Do not look for a fight with the enemy. Beg God for peace and security. But if you do end up facing the enemy, then show endurance, and remember that the gates of Paradise lie in the shadow of the sword.

Another quotation, this one at the beginning of the Introduction, is by Salman Rushdie. It will strike a chord with anyone interested in what we know of Christian origins, but it serves the cause of irony — and a warning that the nature of historical evidence is not always what it seems — since we know that the wealth of detail taken for granted about the life of Muhammad will soon be shown to be nothing more than a facade.

The degree of authority one can give to the evangelists about the life of Christ is relatively small. Whereas for the life of Muhammad, we know everything more or less. We know where he lived, what his economic situation was, who he fell in love with. We know a great deal about the political circumstances and the socio-economic circumstances of the time.

Tom Holland writes with two voices, as he explains in his latest Radio National interview, and together they make for gripping reading. He writes as the historical researcher of cause and effect, commenting on the degree of certainty or less so of our knowledge, guiding readers to the raw materials and current scholarship upon which his narrative is built. At the same time he writes as a novelist, entering into the experiences of the actants, named and anonymous alike, drawing the reader into their world as inevitably as a Spielberg movie.

He knows how to write history for both popular and informed audiences.

Historians don’t write history the way they used to. END_OF_DOCUMENT_TOKEN_TO_BE_REPLACED 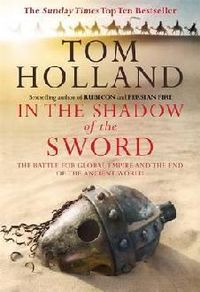 How to explain this silence? END_OF_DOCUMENT_TOKEN_TO_BE_REPLACED