Back to blogging. I have been working for some time on tracking down sources behind several publications, one of them Nanine Charbonnel’s Jésus-Christ, Sublime Figure de Papier. This post is the first of three that wrap up the third chapter of part 2; it is in this chapter that NC brings out the full meaning of the title of her book — figure de papier — the full meaning of which the English translation “paper figure” fails to impart.

1. Incarnation and Transforming Figures of Speech into “Real” Persons

Most of us are well aware that in the Bible Wisdom is often portrayed figure crying out to a deaf humanity to rescue it from its folly. In the first nine chapters of Proverbs we read that Wisdom is begotten rather than created, just as another figure in the New Testament will be said to be begotten of God. More than that, Wisdom is portrayed existing alongside God before creation itself. She stamps her mark on all of creation.

For Nanine Charbonnel, passages like these about Wisdom very likely point us towards understanding the way gospel figures were invented and the way Christ is represented in the New Testament epistles and book of Revelation.

Compare Wisdom in Jewish Scriptures and related literature with the way Christ appears in the gospels.

The Gospel of John opens with Jesus “tabernacling” or “tenting” among his people, with the tent being a metaphor for flesh. Similarly in Sirach 24:8 we find that Wisdom comes to dwell in a tent in Israel:

Then the Creator of all things gave me [=Wisdom] a command,
and my Creator chose the place for my tent.
He said, ‘Make your dwelling in Jacob,
and in Israel receive your inheritance.’ — Sirach 24:8

In Baruch 3:38 Wisdom dwells among men:

Afterwards he was seen upon earth, and conversed with men. — Baruch 3:38

And the Word became flesh, and did tabernacle [or dwell] among us . . .

The concept of pre-existing Wisdom, the chief of God’s beings, living or “tabernacling” among her people Israel, reminds us of Jesus Christ, of course. The motifs associated with personified Wisdom are carried through and applied to the figure of Jesus.

Wisdom and the Word of God

Wisdom is not only personified but it is also identified with the divine Word. Like Wisdom, the Word sits on the throne of God; if the Word touches the heavens he/it also moves with the same power on earth.

Thine Almighty Word leaped down from heaven out of thy royal throne, as a fierce man of war into the midst of a land of destruction,
And brought thine unfeigned commandment as a sharp sword, and standing up filled all things with death; and it touched the heaven, but it stood upon the earth. — The Book of Wisdom / Wisdom of Solomon 18:15-16

God created everything by his word (Genesis 1:1), which is to say, by his wisdom:

O God of my fathers and Lord of mercy, who hast made all things by thy word, and by thy wisdom hast formed man . . . — The Book of Wisdom / Wisdom of Solomon 9:1-2

Now this Word, like Wisdom, as NC points out, acts as an originator and light and even has an interest in the welfare of humankind; it is humanity’s nourisher, their physician, their defender:

Once a righteous man was sold into slavery, but Wisdom did not abandon him. She kept him safe from sin. She went to prison with him and never left him until she had given him power over an empire and made him the ruler of people who had once oppressed him. She let it be known that a false accusation had been made against him, and she gave him eternal honor. — Wisdom of Solomon 10:13-14

This Word is both “writing” and “incarnate flesh”. NC quotes P.-E. Bonnard:

The same divine Word is not only creative, but also revealing. If he sings in the wind, he also expresses himself in the precepts of the Law (Ps 147:15-20). He allows himself to be engraved on the tablets of stone (Ex 34:28) and to be written on the scrolls of parchment, in the form of those divine commandments which give life (Dt 32:45-47), so much so that he comes to be practically identified, like Wisdom, with the Law (Is 5:24; Dt 33:9-10). (Bonnard, 145, translated)

The Word in the Law is not a dead letter, but the living voice of the men of God who make the Law, teach it or apply it. 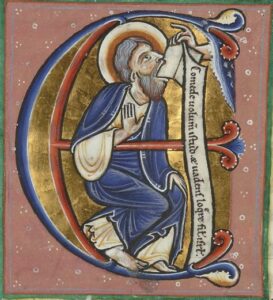 This is how the Word passes through the mouth of the prophet, who receives and transmits the word of Yahweh. (See, for example, Jer. 1:9; 15:16, 19; 42:5; Ezek 2:9-3:4 etc.) Faithful messenger, the prophet must listen with all his ears, keep in his heart, and then shout from the rooftops the oracles that God communicates to him by his Spirit (Zech 7:12). Sometimes aware of prophesying in his turn (Sirach 24:33), the wise man also has the privilege of hearing the word of Yahweh (Jer 9:12).

This Word is also pronounced by the lips of the priest; the latter is charged with preserving, transmitting and proclaiming the terms of the Law (Lev 10:11); he is the delegate of Yahweh himself and must consequently show himself concerned with fidelity, uprightness and religious knowledge: Malachi reminds him of this with vehemence (Mal 2:5-9). In the liturgy, the Word of God constantly reaches men through the priest.

Sometimes the Word also reaches its hearers through the king. Most often, of course, David or his descendant is the recipient of Yahweh’s word, rather than its herald (2 Sam 7, etc.), but in certain circumstances the king himself proclaims the divine word, as was the case with Josiah (2 Kings 23:1-3).

Engraved in the Law, perfectly legible and audible, echoed by God’s lieutenants, verified by the events it announces and which do not fail to occur, the divine Word is thus “seen” on earth, just like Wisdom. Like Wisdom, it does not remain outside of men, but penetrates them, transforming their thoughts and actions, according to the affirmation of Deuteronomy, which says to each faithful person:

The texts on the Word of God, which we have just collected, present two important characteristics. On the one hand, some of them already outline the personification of the Word: so John extends their orientation, when he designates Jesus, the Son of God made man, as the personified Word. On the other hand, they attribute to the Word the titles and functions of Wisdom: this is why recognizing in Jesus the privileges of the Word is equivalent to seeing in him the prerogatives of Wisdom. John is most probably aware of this . . . .

Origen seemed to understand this point when he wrote in his Homilies on Luke,

. . . In the Gospel, however, it is not a voice that is seen but a word, which is more excellent than a voice. So the Gospel now says, “Just as those who from the beginning saw and were ministers of the Word handed it down to us.” The apostles themselves saw the Word, not because they had beheld the body of our Lord and Savior, but because they had seen the Word. — Homily 1.

What was distinctive, then, about Christianity?

As Daniel Boyarin notes, There may be no gainsaying [the] demonstration, I think, that worship of the incarnate Logos is a novum, a “mutation,” as [Hurtado] styles it, introduced by Jesus people, but the belief in an intermediary, a deuteros theos, and even perhaps binitarian worship was common to them and other Jews. (Border Lines, p. 119 — footnoted by NC)

— those who paved the way towards Christianity have taken the above idea of the Word literally, believed in its reality rather (certainly not a mere figure of speech), and advanced to the point of worshiping it;

— the personification of Wisdom/Logos of God was not restricted to the written Torah but was extended to the Oral Torah as well and even took on an “eschatological significance” — describing the final fusion of the gentiles and Jews.

I add here another supporting reference not included by NC, this one from Nicholas De Lange. Is there evidence that Jews of the period of early Christianity actually believed in other beings that might somehow qualify as a “second god”, or at least as an intermediary between God and humanity? De Lange finds such evidence in Origen’s “Contra Celsus”. Celsus is made to say that the Jews do worship more than a single deity and Origen immediately accuses him of a falsehood. But notice the reasons Origen draws upon: Origen says that only the most conservative Jews represent true Judaism, thus leaving it up to readers to suspect that he simply disregards Jews who were more hellenized:

The most useful contrast between the ideas and practices of ‘rabbinic’ and ‘non-rabbinic’ Judaism is to be derived from a comparison of Celsus’ arguments, as quoted in the contra Celsum, and Origen’s replies to them. Celsus’ acquaintance with Judaism, which is surprisingly thorough in some respects, is with a rather hellenized and syncretistic form of the religion, and Origen, by opposing Celsus’ words with statements about the more exclusive Judaism of the rabbis, attempts to ridicule Celsus’ knowledge of Judaism. The picture he paints of Judaism in the contra Celsum is therefore one-sided, and does not always agree with what he himself says elsewhere.

The theology of Celsus’ Jew is highly spiced with ideas derived from Greek philosophy and from other religions. According to Celsus, the Jews worship heaven and the angels who inhabit it. Powers and demons played a large part in the more syncretistic forms of Judaism, but Origen here insists on applying the full rigour of the law, and limits his remarks to `those Jews who observe the law’, a description which neatly characterises the rabbis and their pupils, with their emphasis on halakhah. . . . . Origen is limiting himself consciously to a particular kind of Jew in giving this answer. . . .

(Nanine Charbonnel, however, would probably qualify the above observation by suggesting that what has been thought of as “hellenized Judaism” may indeed have been more original to very “Judaistic” sects of the Second Temple era.)

Next post, part 2 of 3, The Personification of the Torah….

One thought on “Jesus: Incarnation of Written and Oral Torah. part 1 of 3 (Charbonnel contd)”