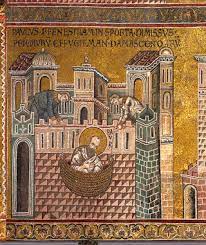 Several discussions have broken out on “Biblical Criticism & History Forum” over the verses in 2 Corinthians describing Paul’s escape from Damascus by being lowered in a basket from a window in the city wall.

30 If I must boast, I will boast of the things that show my weakness. 31 The God and Father of the Lord Jesus, who is to be praised forever, knows that I am not lying. 32 In Damascus the governor under King Aretas had the city of the Damascenes guarded in order to arrest me.33 But I was lowered in a basket from a window in the wall and slipped through his hands.

This passage is the only explicit chronological marker in Paul’s letters. In this post I leave aside the question of which Aretas is being referred to and play the villain by looking at those arguments that raise doubts about the very authenticity of the passage.

First, a brief word in defence of its authenticity:

Against all these conjectures [against authenticity] one must object that manuscript evidence of an interpolation is lacking. “There is no evidence that the epistle ever existed without these verses at this point.”60 Nor is the difficulty alleviated by the hypothesis of a scribal gloss, which merely transfers the problem to the copyist who would have inserted the verses at this point.61

60 Plummer, Second Epistle, 332. [the link is to archive.org where Plummer suggests that if there is interpolation it may even have been made into the original letter by the Apostle himself]

61 Barrett, Second Epistle, 303. [again, like is to the relevant page in archive.org where this time Barrett sees a problem if we try to imagine a scribe inserting such a passage at this point.]

Welborn also posted a list of critics who have thought the passage should be deleted entirely:

What did they say?

In short, the episode is thought not to fit with the other experiences Paul has been writing about and it doesn’t seem to follow from the preceding words. It even seems to get in the way of what would otherwise be a coherent sentence. Paul insists that he will boast of his weaknesses, and then declares most emphatically that he is not lying …. and then, the basket escape. Is that not an odd scenario to follow a boast in weakness and an oath that he is not lying?

Remove the basket escape and we have Paul saying he will boast in his weaknesses, then swears he is not lying — then speaks of his vision and being taken up to the third heaven and being made to suffer a thorn in the flesh as a result. Does not that sound like a coherent line of thought? Where does the escape from Damascus fit?

Machine translations, with a little human polishing here and there, follow. Highlighting added for easier focusing on the main points.

First, for reference, here is the passage in context:

30 If I must boast, I will boast of the things that show my weakness. 31 The God and Father of the Lord Jesus, who is to be praised forever, knows that I am not lying. 32 In Damascus the governor under King Aretas had the city of the Damascenes guarded in order to arrest me. 33 But I was lowered in a basket from a window in the wall and slipped through his hands.

12 I must go on boasting. Although there is nothing to be gained, I will go on to visions and revelations from the Lord. 2 I know a man in Christ who fourteen years ago was caught up to the third heaven. Whether it was in the body or out of the body I do not know—God knows. 3 And I know that this man—whether in the body or apart from the body I do not know, but God knows— 4 was caught up to paradise and heard inexpressible things, things that no one is permitted to tell. 5 I will boast about a man like that, but I will not boast about myself, except about my weaknesses. 6 Even if I should choose to boast, I would not be a fool, because I would be speaking the truth. But I refrain, so no one will think more of me than is warranted by what I do or say, 7 or because of these surpassingly great revelations. Therefore, in order to keep me from becoming conceited, I was given a thorn in my flesh, a messenger of Satan, to torment me. 8 Three times I pleaded with the Lord to take it away from me. 9 But he said to me, “My grace is sufficient for you, for my power is made perfect in weakness.” Therefore I will boast all the more gladly about my weaknesses, so that Christ’s power may rest on me.