I quickly glossed over Nanine Charbonnel’s discussion of what the various sacrifices meant in the Temple cult of Israel in my previous post. I need to back up and cover the key points of those sacrifices before moving on but I’ll try to do so without getting into the details of certain Hebrew and Greek words and manuscript lines.

Key point #3: The temple cult enabled in some sense a repeat of that theophany, or at least a restored communion with God through a mediator and a mediating cult.

Key point #5: The sacrifices came to cover the sins of the entire community of Israel. (That is, the temple cult was concerned with more than individual sins.) 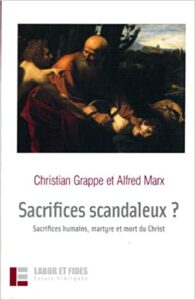 Key point #6: The Suffering Servant in Isaiah 52-53 offers his life as a sacrifice of atonement. He took on the sins of the multitude and had God lay all of Israel’s sins upon him.

Key point #7: In Hellenistic times (second century BCE) the temple cult of sacrifices was halted and a version of the Book of Daniel had the three Jewish martyrs praying from the fiery furnace that their sacrifice be a fulfilment of all that was necessary for atonement and restoration of the communion of Israel with God.

Key point #8: The same concept of sacrifice as accomplishing the goal of fellowship or communion with God is found in the Day of Atonement ritual. The High Priest undergoes various stages of purification to bring him ever closer to a place and condition where he can be in the presence of God who descends to grant his blessing on Israel. His ritual begins with an “asham” or “reparation for sin” sacrifice of a ram and culminates with a more elaborate sacrifice of a second ram, a sin offering that consecrates him and allows for a restored communion of God with his people.

Below I copy a translation of the key pages of Grappe and Marx from which Charbonnel extracts a quotation to explain these sacrifices and their significance for restoring Israel’s relationship with God.

We are now ready to move on to the next critical part of NC’s discussion.

From pages 92-96 of Sacrifices scandaleux?: sacrifices humains, martyre et mort du Christ by Christian Grappe and Alfred Marx. This section is discussed and quoted in part by NC (pp. 375ff). The bolded highlighting is mine to enable an easier scan for key points. END_OF_DOCUMENT_TOKEN_TO_BE_REPLACED