Continuing here Nanine Charbonnel’s Jésus-Christ, Sublime Figure de Papier. This post covers pages 398 to 411. I have questions and some doubts about certain connections that are being made in these pages and note NC’s occasional expressions of tentativeness. But I’ll try to present here the key points expressed and from time to time add what I think is an alternative (or additional) rationale for some of the points made. One question raised is whether some of the connections proposed are the results of reflection on the cross rather than inspirations for introducing the cross into theological imagery in the first place.

1. Two Sides of the Passion: Positive Outcome of an Ordeal

The message is that the people of Israel, though dead, will be victorious. Through death comes resurrection. Some specifics: 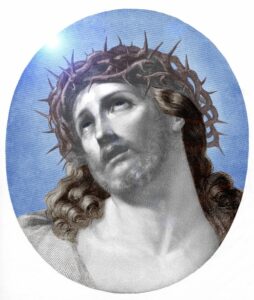 NC suggests that this “apparent instrument of torture is in fact the emblem of divine kingship”. The possibility of its relationship with the Burning Bush in the Exodus is raised (think of the bush as the place where the divinity dwells), as also the possible allusion to the thorn bush that became king in Judges 9:7-15. Salomon Reinach states that the idea that the crown of thorns was intended to inflict suffering on Jesus was “very late” (“très postérieure”) — though the reasons for this claim are not given at Le Roi supplicié.

Marc-Alain Ouaknin, NC with some caution notes, points to kabbalistic associations, and others have remarked on the crown being a rabbinical metaphor for the Torah, but surely more significant than any of these suggestions is the eschatological significance, in this case, the link with the Feast of Tabernacles. To quote Jean Daniélou in Les Symboles chrétiens primitifs:

But we confine ourselves here to the use of crowns of foliage at the feast of Tabernacles. And it seems to us, from all the texts that have been brought together, that it is to this usage that the Jewish and Judeo-Christian symbolism of the crown to symbolize eschatological glory. This usage, like its symbolism, seems relatively recent in Judaism. Judaism. It is related to the development of the messianic of messianic expectation and, in literary terms, with apocalypticism. (Daniélou, p. 30)

In my mind, however, a crown of plants suggesting a return to the original Garden of Eden situation does not seem compatible with a crown of thorns.

The cloak draped upon Jesus was “lampran” (Luke 23:11) – glorious, magnificent; Mark 15:17 and John 19:2, 5 inform us it was purple. NC raises questions: is this the garment of the High Priest? or the robe of King Saul? Certainly, it is a royal garment, but it is a cloak and not a full dress. “Many midrashim” speak of God putting on a royal mantle as he prepares to act in bloody vengeance on the “last day” — e.g. Isaiah 63:2-4. Again there is reference to late Ashkenazi messianic imagery with the suggestion that certain ideas could be “much older”. All of these points briefly touched by NC may be suggestive but I can’t help thinking they are inconclusive. (One point: I am left wondering about the colour red in some of the references instead of purple.)

John 19:5 “Behold the man” — with these words Pilate presents Jesus to the crowd. This is the same phrase as the Septuagint (Greek version) uses to present the first king of Israel: ἰδοὺ ὁ ἄνθρωπος — “behold the man” in 1 Samuel 9:17 (Greek text). One may well see here a “subtle” announcement of Jesus as the “king of the Jews”, the words to be placed on the titulus above the cross.

Pilate washes his hands: Possible allusions — Deuteronomy 21:6-7 and Psalm 26:6. Is it a leap too far to think of the practice of Jews washing hands before writing the name of YHWH? (I think that last suggestion is too indirect to be sustained.)

2. The Cross: between language and object