3. The Incarnation of the two forms of the Torah, the Written Torah and the Oral Torah

Nanine Charbonnel stresses the Jewishness — the “Jewish rootedness” — of the interpretations that have been discussed in this series of posts. In the words (translated) of Jacqueline Genot-Bismuth,

The principle of the dissociation of the Message and the Messenger at work with Moses (Moses receives a text to be transcribed and transmitted: the  “Law of Moses” is the Law or Torah written by the intermediary Moses) is substituted by a new logic of the combining of the Message and the Messenger: according to the teaching of Jesus written by John, God does not send a new revealed book, a new written text, but a revealed man-book, a revelation in act and not in writing, rather like having a materialization of that prophetic dream of Ezekiel [. . where the prophet ingests the megilah [scroll], thus making it his living substance, his … “flesh and blood”.

Jesus is not the bearer of the new revelation; rather, he is himself, in person, the revelation. Jesus/Joshua means “Yahweh saves” and the Word of “Yahweh Saves” is the totality of the word of God in one’s being, life and acts.

We have seen that there is nothing novel about the idea of the incarnation, in some manner, of the Torah in Jewish thought. So what makes Christianity distinctive? The answer that NC offers is the incarnation of the two types of Torah, the written and the oral.

In Pharisaic Judaism great emphasis was placed on the inseparability of the Oral and Written Torah. For the Pharisees (we are going back into the BCE era) it was necessary for an Oral Torah to explain how to apply the Written code in concrete situations of everyday life. The Oral Torah was a way of maintaining the relevance of the Written Torah. The Oral Torah, it can be said, “manifests” or renders “visible” the Written law in daily life, making it a living code of conduct. In this way we find in rabbinic writings that every Jew was encouraged to become “a living Torah”. Indeed, when the Torah enters the flesh in Israel then the word of God finds its fulfilment. (Lorsque la Torah prend chair en Israël, elle accomplit le dynamisme de la Parole. — Massonnet, p. 286)

We have evidence that the relationship between Oral and Written Law was being debated in Palestine in the decades around the turn from BCE to CE. One example is a story of two sages from that era, Hillel and Shamai (only indirectly referenced by NC via Jean-Christophe Attias in Les Juifs et la Bible):

The Sages taught: There was an incident involving one gentile who came before Shammai. The gentile said to Shammai: How many Torahs do you have? He said to him: Two, the Written Torah and the Oral Torah. The gentile said to him: With regard to the Written Torah, I believe you, but with regard to the Oral Torah, I do not believe you. Convert me on condition that you will teach me only the Written Torah. Shammai scolded him and cast him out with reprimand. The same gentile came before Hillel, who converted him and began teaching him Torah. On the first day, he showed him the letters of the alphabet and said to him: Alef, bet, gimmel, dalet. The next day he reversed the order of the letters and told him that an alef is a tav and so on. The convert said to him: But yesterday you did not tell me that. Hillel said to him: You see that it is impossible to learn what is written without relying on an oral tradition. Didn’t you rely on me? Therefore, you should also rely on me with regard to the matter of the Oral Torah, and accept the interpretations that it contains.

Among these Jews the Oral Law was deemed to be a divine revelation that Israel alone had the privilege of receiving; the Written Law was said to be a sealed book to anyone who does not read it by the lights of the Oral Law; and the Oral and Written Law are not two Laws but one and the same law of which only Israel holds the key. (Attias, p. 140)

The Qumran library yields further evidence of discussion of these concepts. In the Damascus Document we read of an eschatological figure who appears to have prophetic and messianic traits, one called Interpreter of the Law, who :

The books of the Torah are equivalent to the booth of the king as it says, And “I will raise up the fallen booth of David” (Amos 9:11). The king refers to the <prince> of the congregation and the Kiyyun of their images are the books of the prophets whose words Israel has despised. The star is the Interpreter of the Torah who is to come to Damascus, as it is written, “A star has stepped forth from Jacob and a scepter has arisen from Israel” (Num 24:17).

Some have interpreted this figure as one comparable to a new Moses who gives interpretations of Torah in his lifetime and again as an end-time Elijah who will return to teach righteousness.

Again from Qumran, the Commentary on Habakkuk 2:4

…. Interpreted, this concerns all those who observe the Law in the House of Judah, whom God will deliver from the House of judgement because of their suffering and because of their faith in the Teacher of Righteousness. . . . (The words of the prophet are understood in terms of a qualified relationship to an exceptional person, the supreme guide of the “community” or Teacher of Righteousness (probably a fictitious figure).

NC follows André Paul and others who view the Teacher of Righteousness as a personification of the pious study of Scriptures or Torah. The process followed is midrash, built upon new understandings emerging from interpretations of the Law. Such a process would make a strictly legalistic application of the Torah impossible, as we see in the example of Hillel who is reputed to have taught a merciful application of the Law. 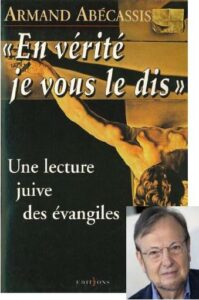 Personification … of Exegesis Itself?

NC refers to the insights of the Jewish scholar Armand Abécassis who, while believing in a historical Jesus, ironically provides insights that offer every reason to understand Jesus was a midrashic fabrication. Abécassis explains that the Voice at the Revelation at Mount Sinai was needed to render God’s meaning in language in order to be understood. Moses was not the voice nor the language, otherwise he would be a prophet like any other. Instead, Moses is the mediator or link between the voice — he is neither the voice nor the message of the voice.

Contrast Jesus (continuing the exposition of Abécassis): As a divine figure he is necessarily beyond all human language and would himself be the voice itself. But he is also a human figure, and so he translates the divine voice into human language and meaning so that his message can be understood.

What would his listeners hear when they heard him speak?