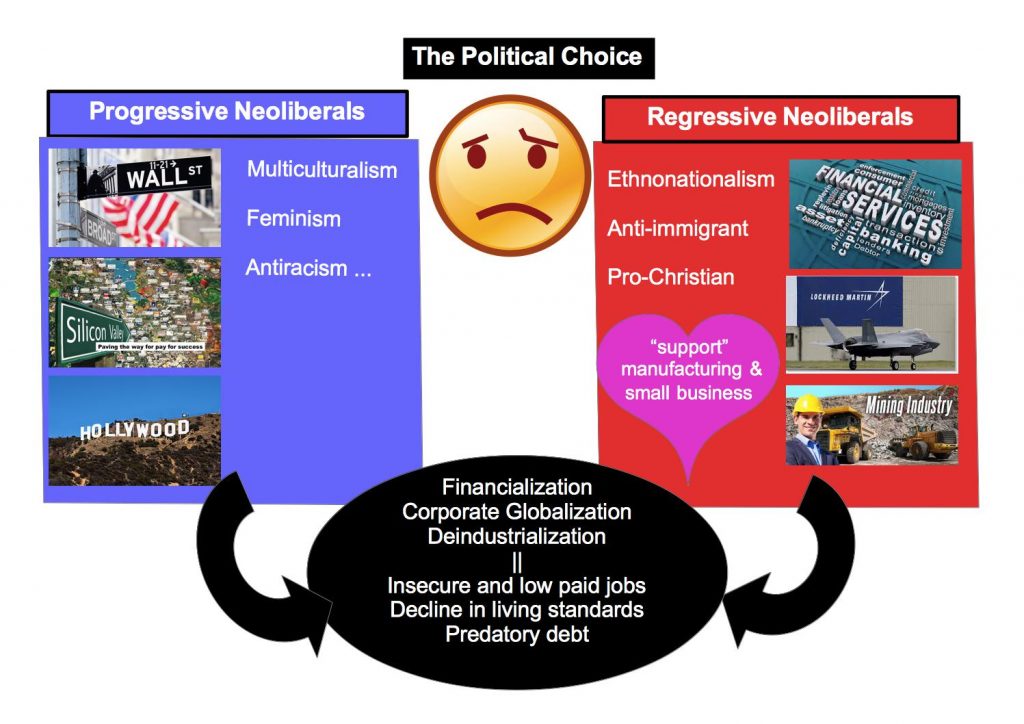 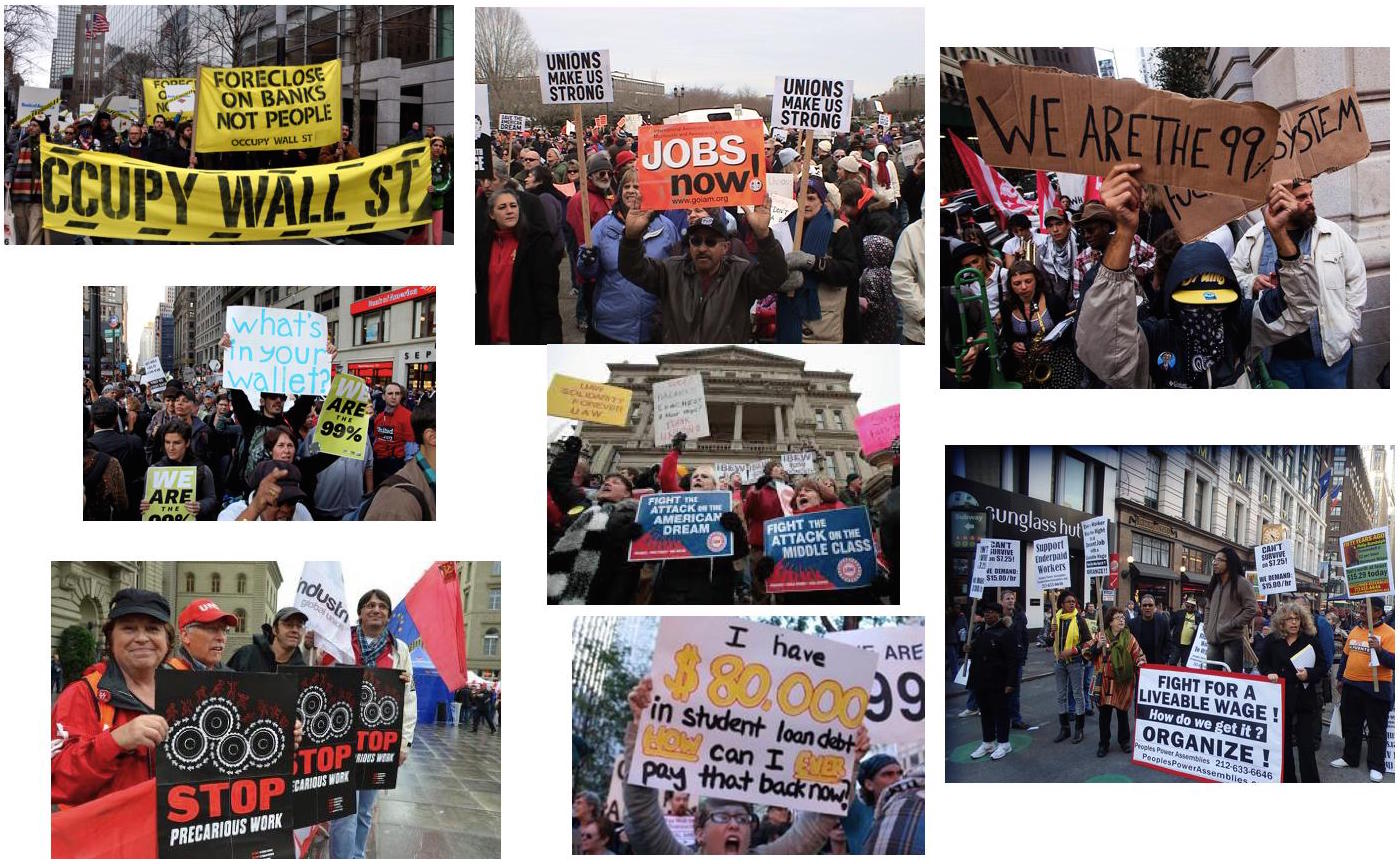 (I’m reminded of Australia’s recent royal commission into the banking, superannuation and financial services industries. The terms of the investigation only allowed a limited area of questionable practices to be scrutinized but the results even of that much led to much outraged publicity and all the appearances of strong mea culpas from the banks and the most sincere promises to reform and win back trust. Within a few months of the commission winding up and the promises to do better still ringing in our ears, several banks responded to the Reserve Bank’s lowering of interest rates by adding to the pockets of the CEOs and refusing to pass on the full benefit to their customers.)

That earthquake finally struck in 2015/16, as long-simmering discontent suddenly shape-shifted into a full-bore crisis of political authority.

In that election season, both major political blocs appeared to collapse.

On the Republican side, Trump, campaigning on populist themes, handily defeated (as he continues to remind us) his sixteen hapless primary rivals, including several handpicked by party bosses and major donors. On the Democratic side, Bernie Sanders, a self-proclaimed democratic socialist, mounted a surprisingly serious challenge to Obama’s anointed successor, who had to deploy every trick and lever of party power to stave him off. On both sides, the usual scripts were upended as a pair of outsiders occupied the hegemonic gap and proceeded to fill it with new political memes.

(For the concepts of hegemony and counter-hegemony refer to the first post in this series.)

Both Sanders and Trump excoriated the neoliberal politics of distribution. But their politics of recognition differed sharply.

Whereas Sanders denounced the “rigged economy” in universalist and egalitarian accents, Trump borrowed the very same phrase but colored it nationalist and protectionist. Doubling down on long-standing exclusionary tropes, he transformed what had been “mere” dog whistles into full-throated blasts of racism*, misogyny, Islamophobia, homo- and transphobia, and anti-immigrant sentiment. The “working-class” base his rhetoric conjured was white, straight, male, and Christian, based in mining, drilling, construction, and heavy industry. By contrast, the working class Sanders wooed was broad and expansive, encompassing not only Rust Belt factory workers, but also public-sector and service workers, including women, immigrants, and people of color.

(Trump flatly denied he is racist (and misogynist…) but see Strategies of Denial of Racism for an analysis of how racist attitudes and policies have been subsumed under the rhetoric of denialism since the Civil Rights movement of the 1960s.)

The diagrams below represent the general picture. Most Sanders’ supporters were young and college educated but Sanders also had strong support among “eviscerated manufacturing centers” who had earlier voted for Obama. (The respective working class supporters were not strictly divided into the groups listed; there were fuzzy areas of overlap, of course.)

Both Sanders and Trump attacked the neoliberal politics of distribution, of the 1%’s plundering of the rest. But they diverged in their recognition values.

Sanders’ was building a broad, expansive working-class base for a counter-hegemony to the “rigged economy” of the prevailing hegemony of the neoliberal/corporate powers. His “recognition values” (see the first post to understand how recognition values work in establishing political dominance, how they represent a faction’s “common sense” view of the world) acknowledged the right of all not only manufacturing workers but public sector and service workers to be restored to a more prosperous position. Recognition was extended to women, immigrants, LGBTQ, people of colour, immigrants. It was a progressive populist foundation for a broad counter-hegemony indeed. 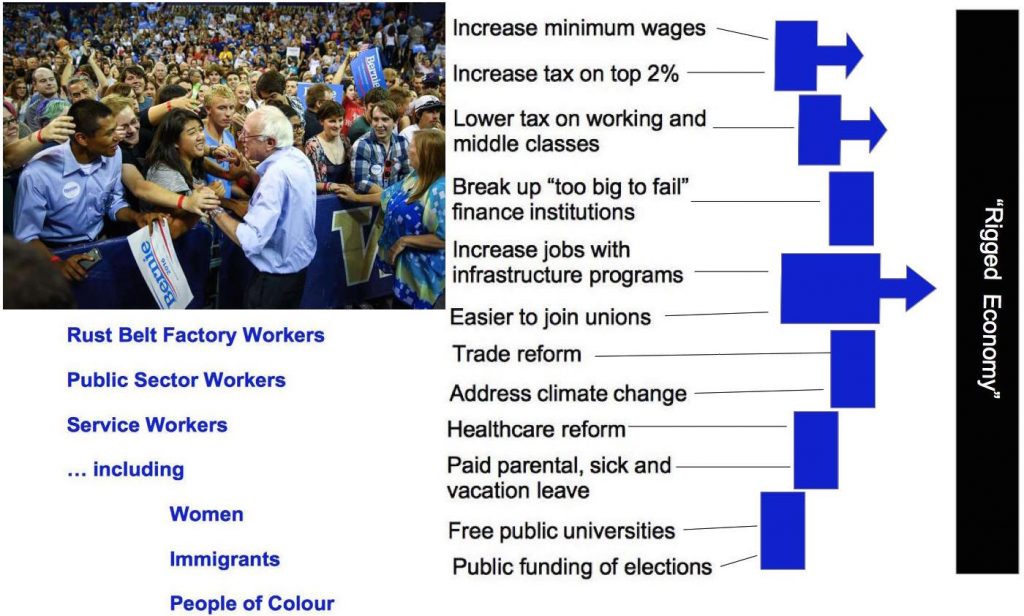 Trump’s supporters came from those same gutted manufacturing regions, including from those who had earlier supported Sanders against Hillary Clinton in the Democratic Primaries. His supporters also included dyed in the wool Republicans libertarians, small business owners, others with “little interest in economic populism.”

Trump’s counter-hegemonic bloc was a reactionary populism fueled by a “hyper-reactionary politics of recognition”. Trump’s recognition went to Christians who opposed abortion and the teaching of evolution in school; to the veterans of America’s wars; to those who felt threatened by immigrants; to those who saw people of colour as a primary source of crime and those who wanted fewer controls on police powers; to those who had been hurt financially by the demise of manufacturing industries. (I have strayed somewhat from the strict letter of Fraser’s article but think I have retained the gist.) 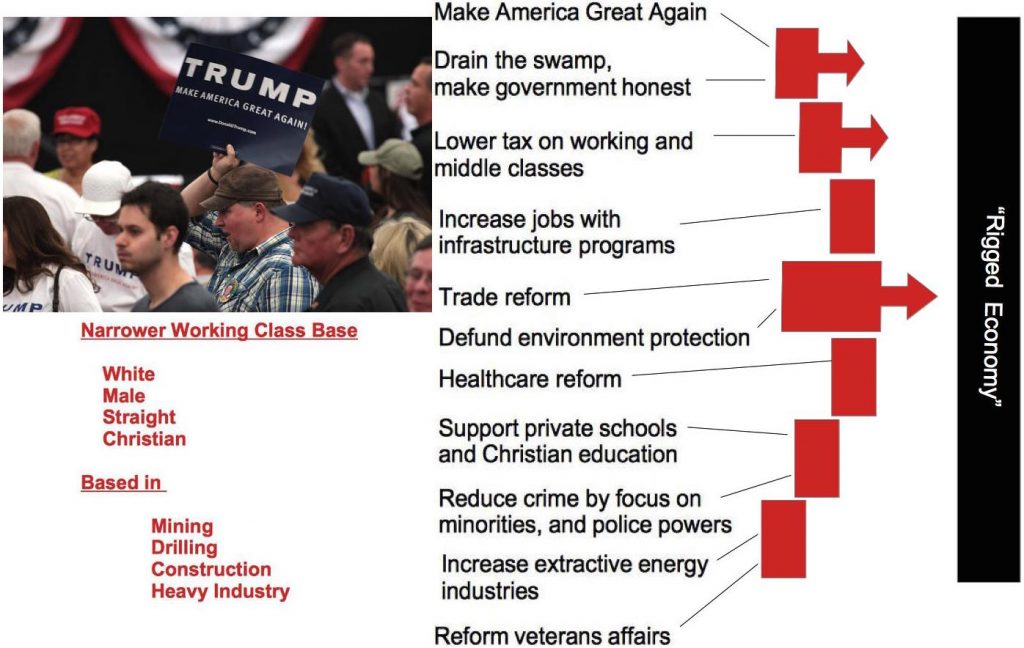 The next stage of the Trump narrative is how after he was elected President he abandoned his attack on the “rigged economy”, the neoliberal view of wealth distribution, while at the same time ratcheting up his hyper-reactionary recognition message.

6 thoughts on “Understanding the Rise of Trump (3)”