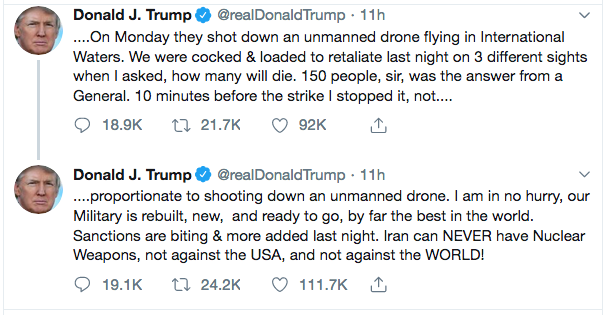 Excerpt from Aljazeera’s How close are Iran and the US to war?

The “real deterrent” in the current situation was the fact “the Iranians were able to down the most advanced American drone using stealth technology with an Iranian-made surface-to-air missile,” he said, adding that Trump may have stood down because he recognised any Iranian response to a US attack would be “relentless and disproportionate”.

In such a scenario, Iran was also likely to target US allies in the region, including Saudi Arabia and the United Arab Emirates, where the drone that was shot down reportedly took off from.

“I think it would be an enormous miscalculation on the part of the Americans to assume that the Iranian response to any strike would be limited.

“It will be larger than the initial strike, it will be disproportionate, and it will be relentless. And it will not only target the aggressor, it will target those countries – like the United Arab Emirates or perhaps Saudi Arabia – that allowed the US to carry out this attack.”

Mahjoob Zweiri, director of the Gulf Studies centre at Qatar University, said Trump’s actions towards Iran are designed to appeal to his support base in the US ahead of the 2020 presidential elections.

“He has done what will make [his base] happy, he has withdrawn from the [nuclear] deal, he imposed sanctions, he basically made sure the economy of Iran was really falling apart. He has done everything he has promised his base.

“Trump’s main focus is a second term. If any military action against Iran will affect this badly, he will never do it.”

Zweiri said the escalating series of incidents in the Gulf may be an Iranian ploy to pile up pressure on the international community to act and protect Tehran from US sanctions.

“They want to push more for the international community to act, to mediate, to push, to pressure the United States, to have a dialogue because this status quo is collapsing their economy and will have serious ramifications on the stability of the regime in Iran.