This is the final post in the series covering Nancy Fraser’s article, “From Progressive Neoliberalism to Trump—and Beyond” that was published in the American Affairs Journal in 2017. Previous posts so far: 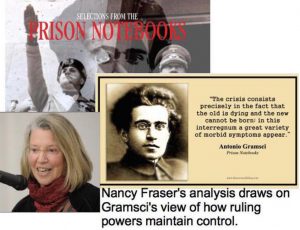 We concluded post #4 on the depressing note that the most logical solution to address the failures of both Obama and Trump is for the mainstream working and middle classes to unite against their real enemy, the powers that are responsible for their current plights of home losses, job losses, insecure and low paid work, ballooning debts of all kinds, . . . , to unite: but currently they are divided between the populists on the Bernie Sanders side of the fence and the populists backing Trump and the two sides hate each other.

So, what does Nancy Fraser suggest?

Her most critical message is for the progressives. Stop being so damn moralizing and condescending to the Trump-ists. Acknowledge that the problems are systemic. Once you start from the position that racist attitudes are genetic and that the only proper response is to condemn the attitudes of “the deplorables” then you start from a losing position.

The message, rather, is to keep one’s eyes on the real enemy, on those who are primarily responsible for the current plight of us all who subsist and struggle beneath the corporate elites.

If that doesn’t satisfy your moral instincts then try to understand that the racist issues are bound up with the class issues and a bit of clarity as to causes and background will help heal wounds or at least lower barriers sufficiently to form some type of alliance against the real cause of what we (globalization means the problem extends beyond the U.S.) are facing.

The first thing that needs to be done is to recognize what the ruling progressive neoliberal economic elite forces have done. Recall Gramsci (see posts 1 and 4). They have used the rhetoric of feminism, anti-racism, green-causes, to win recognition for themselves as the saviours of all that is good. What is needed, Nancy Fraser says, is a “strategy of separation”. Acknowledge the seduction of the corporate powers and make a clean break.

First, less-privileged women, immigrants, and people of color have to be wooed away from the lean-in feminists, the meritocratic anti-racists and anti-homophobes, and the corporate diversity and green-capitalism shills who hijacked their concerns, inflecting them in terms consistent with neoliberalism. This is the aim of a recent feminist initiative, which seeks to replace “lean in” with a “feminism for the 99 percent.” Other emancipatory movements should copy that strategy.

That’s the first. There’s a second. Certainly there are down-to-the-core ethnonationalists and racists. But does that core really represent all in that orbit? Or at least, at least, are not many of those Trump-ists still open to joining forces with those in the camp from which many of them defected in 2015 — disillusioned Sanders’ supporters?

Second, Rust Belt, southern, and rural working-class communities have to be persuaded to desert their current crypto-neoliberal allies. The trick is to convince them that the forces promoting militarism, xenophobia, and ethnonationalism cannot and will not provide them with the essential material prerequisites for good lives, whereas a progressive-populist bloc just might. In that way, one might separate those Trump voters who could and should be responsive to such an appeal from the card-carrying racists and alt-right ethnonationalists who are not. To say that the former outnumber the latter by a wide margin is not to deny that reactionary populist movements draw heavily on loaded rhetoric and have emboldened formerly fringe groups of real white supremacists. But it does refute the hasty conclusion that the overwhelming majority of reactionary-populist voters are forever closed to appeals on behalf of an expanded working class of the sort evoked by Bernie Sanders. That view is not only empirically wrong but counterproductive, likely to be self-fulfilling.

Recall that it is “progressive neoliberalism” that the Trump supporters have opposed. That 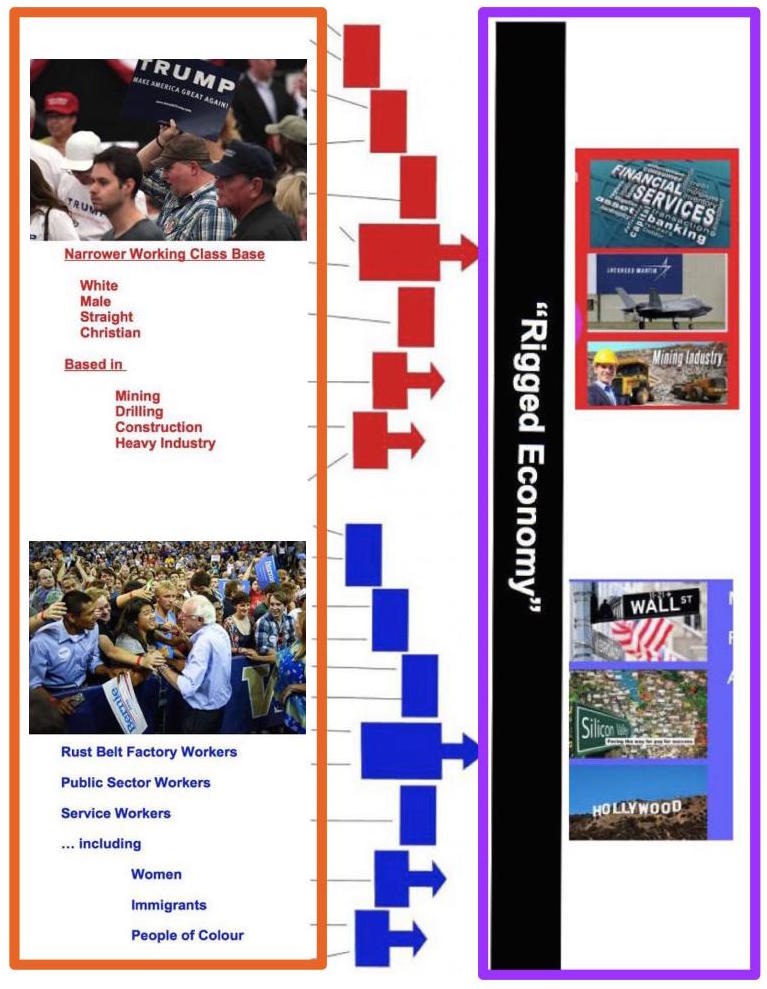 Moral condemnation of racists, homophobes, climate change deniers, the anti-abortionists and Christian fundamentalists, of those on the “regressive populist” side, is bound up with the recognition values of the corporate elites of the progressive neoliberals. Recall the Gramscian analysis in posts one and four. By pitting one group against the other they effectively deflect attention from their own role in the real problems inflicted on both sides.

[I]t is counterproductive to address [concerns about racism, sexism, homophobia, Islamophobia, and transphobia] through moralizing condescension, in the mode of progressive neoliberalism. That approach assumes a shallow and inadequate view of these injustices, grossly exaggerating the extent to which the trouble is inside people’s heads and missing the depth of the structural-institutional forces that undergird them.

Fraser addresses race in a little detail to illustrate the point. Yes, hating blacks is bad, of course. But notice, think, recall . . .

In this period, black and brown Americans who had long been denied credit, confined to inferior segregated housing, and paid too little to accumulate savings, were systematically targeted by purveyors of subprime loans and consequently experienced the highest rates of home foreclosures in the country.

In this period, too, minority towns and neighborhoods that had long been systematically starved of public resources were clobbered by plant closings in declining manufacturing centers; their losses were reckoned not only in jobs but also in tax revenues, which deprived them of funds for schools, hospitals, and basic infrastructure maintenance, leading eventually to debacles like Flint — and, in a different context, the Lower Ninth Ward of New Orleans.

Finally, black men long subject to differential sentencing and harsh imprisonment, coerced labor and socially tolerated violence, including at the hands of police, were in this period massively conscripted into a “prison-industrial complex,” kept full to capacity by a “war on drugs” that targeted possession of crack cocaine and by disproportionately high rates of minority unemployment, all courtesy of bipartisan legislative “achievements,” orchestrated largely by Bill Clinton.

We get the picture. The race problem is an institutional problem. We need to target the real causes. Don’t fall back on the losing strategy of moralizing our would-be allies.

Renouncing the progressive neoliberal stress on personal attitudes, a progressive populist bloc must focus its efforts on the structural-institutional bases of contemporary society.

The focus, the slogans, the memes etc,

must highlight the shared roots of class and status injustices in financialized capitalism.

Conceiving of that system as a single, integrated social totality, it must link the harms suffered by women, immigrants, people of color, and LGBTQ persons to those experienced by working-class strata now drawn to rightwing populism. In that way, it can lay the foundation for a powerful new coalition among all whom Trump and his counterparts elsewhere are now betraying — not just the immigrants, feminists, and people of color who already oppose his hyper-reactionary neoliberalism, but also the white working-class strata who have so far supported it.

The entire working class must be brought together as a counter to the forces currently exploiting and bleeding them. Fraser sees the initiative for such a shift coming from the progressive populists, those who are currently alienating their potential allies by subjective moralizing instead of targeting the objective causes of their shared problems.

The capitalist system is like a tiger eating its own tail, Fraser suggests. It is destroying the environment on which it depends, it is withering the working and middle class base on which it also depends, . . . it cannot continue. But before it ruins us all a new counter-weight, a new hegemonic bloc needs to challenge it — for the sake of all.

Nancy Fraser’s article can be read in full at https://americanaffairsjournal.org/2017/11/progressive-neoliberalism-trump-beyond/

I have tried to make some of its key points clear, hopefully without sacrificing too much of the original.

10 thoughts on “Understanding Trump’s Rise, Presidency — and a Positive Resolution to the Crisis”