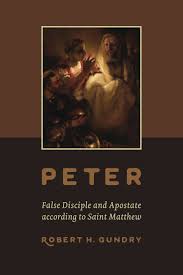 First question: if Matthew thought Peter was a false apostle then why didn’t he say so directly?

To be sure, Matthew does not pronounce an explicit judgment on Peter as a false disciple. He simply presents evidence of Peter’s falsity. This avoidance of an explicit judgment conforms to the prohibition of weeding out tares, representative of false disciples, from among wheat, representative of true disciples, though the tares, which were originally indistinguishable from the wheat, became recognizable as tares even before harvest-time, representative of the consummation (Matt. 13:24-30, 37-43). That is to say, the avoidance of explicit judgment while presenting evidence of falsity keeps Matthew from disobeying Jesus’ prohibition of judgment (Matt 5:22; 7:1-2). By contrast, Jesus pronounces judgment against Judas Iscariot as a false disciple, for he has the judgmental authority to do so (see Matt 26: 24-25).

Second question: What about Jesus giving Peter the keys to the Kingdom of Heaven and saying “Upon this rock (with the name Peter meaning “rock”) I will build my church,”  in Matthew 16?

Jesus declared Peter to be “blessed” for having God reveal to him that Jesus was “the Christ”.

He saith unto them, But who say ye that I am? And Simon Peter answered and said, Thou art the Christ, the Son of the living God. And Jesus answered and said unto him, Blessed art thou, Simon Bar-jonah: for flesh and blood hath not revealed it unto thee, but my Father who is in heaven. — Matthew 16:15-17

Being blessed is no big deal. The word really means “privileged” for a start. Earlier Jesus included Judas Iscariot among the “privileged ones”. Recall that Jesus spoke in incomprehensible parables but his twelve disciples were “privileged” for understanding them:

But blessed [privileged] are your eyes, for they see; and your ears, for they hear. — Matthew 13:16

Some students make much of the two slightly different Greek words translated as “rock” in Matthew 16. Πέτρος  (petros) is the word for “Peter” and πέτρᾳ (petra) is used for “rock” in the following:

And I also say unto thee, that thou art Peter, and upon this rock I will build my church; and the gates of Hades shall not prevail against it. — Matthew 16:18

One church I once belonged to taught that “petros” meant a smallish stone while “petra” was a massive rock, so Jesus was setting himself above Peter by saying that Peter was a mere pebble while Jesus, the massive rock, would become the foundation of the Church. A number of scholars have argued that the pun really only works in Aramaic where there would be only one word — petra — used, not the two as in the Greek. Gundry dismisses the Aramaic argument by pointing out that Matthew was writing for audiences who knew only Greek. He further points out that in Greek literature name and word variants such as we find in Matthew 16:18 were irrelevant when it came to literary puns. That is, we should not read a lot into the different words petros and petra. Besides, the debate as to whether the two words are significantly different in meaning is still unresolved.

What Gundry identifies as significant in verse 18 is that Matthew switches word genders and persons. Petra is feminine; petros masculine. “You are Peter” is second person and “upon this rock” is third. Gundry’s conclusion is that Jesus is switching referents: first he speaks to Peter of Peter, but then shifts to speak of a third party, a “bedrock” suitable for a foundation of a building. Matthew’s audience had not very long earlier heard read to them Jesus speak of the rock upon which his followers were to build:

Not only do both passages feature building on bedrock. So too do both passages feature the demonstrative pronoun: “these” in 7:24, where it is distinctive of Matthew over against the parallel in Luke 6:47, and “this” in Matthew 16:18. Given the shifts both from the masculine gender to the feminine gender and from the second person to the third, Matthew’s audience will have naturally equated “this bedrock” with “the bedrock” which consisted of “these words” of Jesus.

And the phrase “the gates of Hell/Hades shall not prevail against it” also recalls the parable in Matthew 7 where Jesus gave the assurance that anyone who built upon the foundation of “these words of His” would never be shaken when the storms came.

So contrary to what some have understood, Gundry is suggesting that the “petra” foundation represents neither Peter nor even the person of Jesus, but the “words of Jesus”.

What about the keys, though?

Judas Iscariot was also said to have been given the power to bind and loosen things on earth and heaven (Matthew 18:18) just as the hypocritical scribes and Pharisees sat in Moses’ seat and wielded power to shut people out of the Kingdom (16:5-12; 23:13). (The word for “shut off”, κλείετε, is cognate to for “keys”, κλεῖδας.)

Gundry argues that the evidence is even more damning as we read further in Matthew 16.

From that time began Jesus to show unto his disciples, that he must go unto Jerusalem, and suffer many things of the elders and chief priests and scribes, and be killed, and the third day be raised up.

And Peter took him, and began to rebuke him, saying, Be it far from thee, Lord: this shall never be unto thee.

But he turned, and said unto Peter, Get thee behind me, Satan: thou art a stumbling-block unto me: for thou mindest not the things of God, but the things of men.

Matthew draws the readers attention to the way Peter is bluntly contradicting Jesus’ intention to suffer in Jerusalem. The pupil rebuking his Master! Peter is Satan — and Jesus had earlier in the Wilderness Temptation likewise commanded the real Satan to “Get behind me”. “Stumbling block” sounds like a mere speed bump but the Greek word is σκάνδαλον (skandalon), a “snare”, a “trap”.

Unhappily for Peter, every other Matthean occurrence of σκάνδαλον refers to those who are condemned to a furnace-like hell of eternal fire (13:41-42 . . . ; 18:7-9); and σκάνδαλον occurs here in the emphatic initial position. Frankemölle notes bluntly that for Matthew, σκάνδαλα belong in hell.

There is a Youtube video of Gundry introducing his thesis but I have not yet heard it. Readers, you will probably view it before I do.

(All quotations from Gundry’s Peter are from Kindle)

I was first made aware of Gundry’s book via Michael Bird’s article Did Matthew think that Peter was a False Disciple? on Euangelion.

79 thoughts on “Peter as Apostate Apostle in the Gospel of Matthew?”